Prague: Security officials from 30 countries have hammered out a common approach to wireless network safety, responding to concerns over equipment made by Chinese company Huawei Technologies.

The non-binding proposal warns governments against relying on suppliers of fifth-generation networks that could be susceptible to state influence or based in countries that haven't signed international agreements on cyber security and data protection. 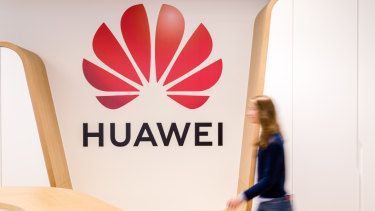 An employee walks past a logo in the reception area of the Huawei Cyber Security Transparency Centre in Brussels, Belgium.Credit:Bloomberg

"The customer – whether the government, operator, or manufacturer – must be able to be informed about the origin and pedigree of components and software that affect the security level of the product or service," read the Prague Proposal document handed out at the end of the conference in the Czech capital.

Representatives from 30 European Union, NATO and countries such as Australia, the United States, Germany, Japan and South Korea attended the meeting to hash out an outline of practices that could form a coordinated approach to shared security and policy measures.

Unified action could help governments facing a difficult balancing act with Huawei. The US is urging them to ban the company from 5G networks, arguing its systems are vulnerable to Chinese state espionage. Doing so risks delaying network rollouts and drawing reprisals from Beijing, an important investment partner for many of the countries.

The US administration applauded adoption of the document.

"The United States supports the resulting Prague Proposals on 5G security published by the Czech conference chairman as a set of recommendations for nations to consider as they design, construct, and administer their 5G infrastructure," White House Press Secretary Sarah Huckabee Sanders said in a statement. "The United States government plans to use the Prague Proposals as a guide to ensure our shared prosperity and security."

EU members have until the end of June to assess cyber security risks related to 5G, leading to a bloc-wide assessment by October 1. Using this, EU countries would then have to agree measures to mitigate risks by the end of the year.

Huawei said it was ready to work with regulators and other stakeholders on creating effective rules.

EU governments are due to submit national risk assessments for 5G networks in mid-July.