TikTok superstar Addison Rae had an unlikely run-in with former President Donald Trump at a UFC fight, and fans are divided over the interaction.

Addison Rae fans were left shocked after the influencer, who rose to fame on TikTok, introduced herself to former President Donald Trump at the star-studded UFC 264 fight in Las Vegas. In a YouTube video uploaded by NELK, the 20-year-old was seen approaching the former POTUS as he watched the fight between Conor McGregor and Dustin Poirier — watch the clip here. “Hi! I’m Addison. Nice to meet you. I have to say hi, hello. So nice to meet you,” she is heard saying in the clip, while shaking his hand. 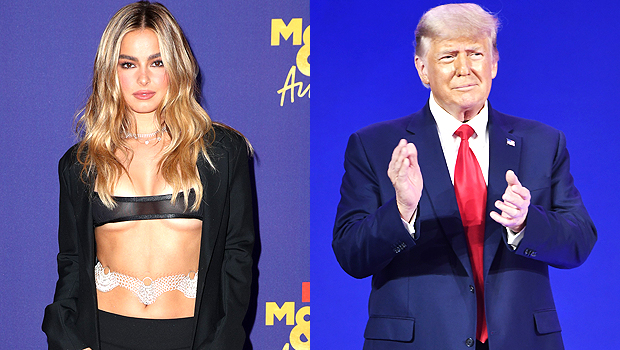 Many fans of the Louisiana native took issue with the interaction, as social media users began to speculate about her political affiliation. “Oopsies Addison… your Republican is showing,” YouTuber Chris Klemens wrote. “Word on the street is Addison Rae’s song Obsessed is about Donald Trump actually.” Another Twitter user wrote, “Not Addison Rae being one of the biggest performative activists last summer and now her willingly going up to Trump to introduce herself and talk to him.”

Others recalled Addison’s public support of Black Lives Matter and other social justice movements, which they suggested was at odds with Trump’s policies. “Miss Addison Rae how you stealing from black creators and shaking hands with trump and saying ‘it’s so nice to meet you’ ermmm the math ain’t mathing,” one person wrote. Nevertheless, others jumped to the defense of the young TikTok star.

“If you care that addison rae said hi to trump then you are probably a loserr,” one user wrote, while another said, “As much I dislike Addison rae, she shouldn’t get cancelled for saying hi to president Trump.” Outside of social media, Addison is also pursuing an acting career, and is set to star in He’s All That. In December, it was also revealed that her real-life pal, Kourtney Kardashian, will make a cameo in the film. Kourt shared the exciting news by posting a photo of herself reading a script for the movie with the caption, “Studying.”