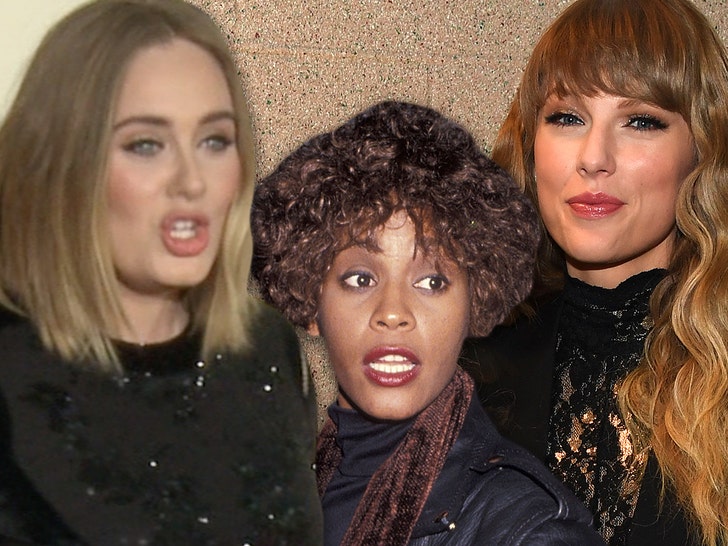 The Internet has been buzzing lately about who’s the stronger singer between Whitney Houston and Taylor Swift — but now, a new contender has entered the chat … Adele.

You might’ve heard about this last week — there was a raging debate on Twitter about who was “better” between TayTay and the late, great Whitney … which got kickstarted with Bartstool Sports staffers, including one who felt Taylor was more well-rounded big picture.

Of course, she was met with ferocious pushback, both right there from her Stoolie colleagues … but also online, with many (rightly) pointing out the sheer absurdity of comparing them at all — as Whitney is oh so obviously on another level, vocally and culturally.

To clarify, this gal’s point seems to stem from the fact Taylor writes a lot of her own stuff, and in her eyes … is likely the better artist all around. Eh … still don’t know about that!

Anyway, Ms. Adele got thrown into the fire this weekend too … with none other than Pierce Morgan claiming she’s up there with some of the all-time greats, including Whitney.

Others seemed to agree … saying Adele has perhaps some of the best pipes in the game right now, and may actually stack up against other modern-day legends — which is certainly a more serious take than Taylor (no offense, Swifties).

However, just as many weren’t so quick to let Adele into the icon club — with members like Aretha Franklin, Celine Dion and Mariah Carey, to name a few — arguing, yeah … she’s a solid singer, and may even the best of the bunch out of today’s crop of popular female artists, but doesn’t really compare when you measure ’em note for note.

We’ll say this … today’s singers, male or female, simply don’t hold a candle to artists of the past, many of whom had raw vocal talent that ya just don’t hear anymore — at least not so much in the 21st century.

Adele’s close … but (probably) no cigar.