ADRIAN THRILLS: Meet the new boss – It’s a polished second outing from the man they call the Geordie Springsteen

Verdict: Heartache album with a twist

The ‘difficult second album’ has sent plenty of young pop pretenders into a tailspin.

This year alone, the growing pains were all too apparent on patchy sequels from Rag’n’Bone Man and Anne-Marie — although Billie Eilish dodged the dreaded sophomore slump with flying colours on Happier Than Ever.

Sam Fender did pretty well the first time around. The boyish singer-songwriter from North Shields followed in the footsteps of Adele and Ellie Goulding by winning the Critics’ Choice prize at the Brit Awards in 2019. He went on to top the UK charts the same year with his gritty debut album Hypersonic Missiles.

A little burnishing of his rougher musical edges was only to be expected on his second album, and the musician, 27, duly obliges by adding a more sophisticated sheen to his jangling rock ‘n’ roll on Seventeen Going Under. What stays intact, however, is his fist-pumping enthusiasm and ability to chronicle blue-collar life with his heart firmly on his sleeve. 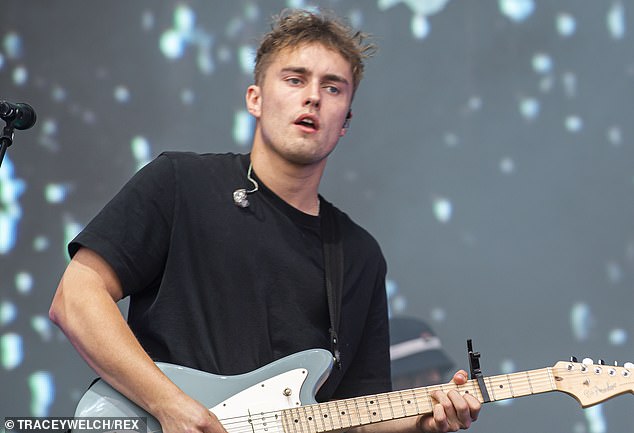 Sam Fender did pretty well the first time around. The boyish singer-songwriter from North Shields followed in the footsteps of Adele and Ellie Goulding by winning the Critics’ Choice prize at the Brit Awards in 2019

Growing up on a council estate as a fan of the Arctic Monkeys and Bruce Springsteen, Fender poured all the experiences of his teenage years into his first record, drawing on local tales and bravely tackling topics such as youth suicide.

Now a much bigger name, he could have resorted to singing of life on the road or the perils of fame. Instead, he turns the gaze on himself. ‘I didn’t want to write about Covid, because nobody wants to hear about that,’ he explained. ‘So I went inwards.’

The upshot is a Technicolor coming-of-age story on which he sings of family, friends, a misspent youth and his romantic failings. His fondness for everyday detail remains, but the music is generally celebratory.

Fender is often talked of as a Geordie Springsteen, and there are a few obvious ties that bind him to The Boss here: the gleaming sax break on Get You Down; a twinkling piano motif in the style of the E Street Band’s Roy Bittan on The Dying Light. To these ears, though, Fender’s arena-ready tunes are more of a throwback to the early years of U2.

The title track is a case in point, with Fender’s account of ‘fist fights on the beach’ and a painful teenage heartbreak powered by chugging guitars and a rousing chorus.

Getting Started is another banger — a blend of heartland rock and electronics that chronicles his determination to stay on the right side of the tracks despite being ‘attracted to a bad scene’.

Elsewhere, Aye lays bare his disillusionment with polarised politics, and Get You Down details how a lack of confidence has affected his relationships. ‘I see the triggers, but I can’t shake them loose,’ he sings.

There’s further romantic regret on piano ballad Last To Make It Home, and a soft-focus instrumental coda on the dreamy Mantra. It’s not a flawless return. Electro-rock number The Leveller feels overwrought, and Fender’s lyrics can be clunky (at one point, he’s ‘reaching for a light in a gauntlet of toxic paradigms’, as you do).

He fares better when he keeps things simple, pledging to live life to the full in honour of deceased friends on The Dying Light and singing about his relationship with his dad on Spit Of You, a compassionate ballad that suggests he’s in this for the long haul.

The tricky second album? Far from going under, he’s risen to the challenge.

South London duo Oh Wonder remain one of British pop’s unsung successes, despite two of their three previous albums reaching the Top 10 — and Billie Eilish covering one of their songs, All We Do, during her Apple+ documentary The World’s A Little Blurry in February.

Former solo artist Josephine Vander Gucht and bandmate Anthony West have been a couple since 2013 and musical partners since 2014, but the pandemic — which struck just as they were about to tour their third album, No One Else Can Wear Your Crown — took a significant toll on their personal and professional lives.

With simmering tensions between them rising to the surface as they entered quarantine, Josephine and Anthony poured their rage and resentment into a home-produced record that explores the loneliness and frustrations of lockdown life, against a backdrop of low-key but melodic electronic bleeps and whooshes.

22 Break — as in ‘two to break’ a heart — is more of a make-or-break album than a classic break-up one. But there’s no mistaking the raw immediacy of its he-said-she-said narratives on Kicking The Doors Down and Don’t Let The Neighbourhood Hear. ‘I’m just afraid that I’m washed up and dried out,’ Josephine sings on Baby.

While the music — lo-fi bedroom pop and folkish electronica — doesn’t always match the urgency of the words, there are potent hooks on Down plus jazzy sax and piano on Dinner. And though some of these songs might suggest otherwise, there’s even a happy ending. Josephine and Anthony married in August.

Oh Wonder reckon they might be the first musicians to have made a break-up record while on the point of breaking up . . . with one another.

They’re wrong. Fleetwood Mac did all that and more on 1977’s Rumours. Nonetheless, 22 Break is a compelling study of one couple’s bid to overcome the emotional strains of lockdown — and proof of them coming out on top.

Both albums are out today. Sam Fender starts a UK tour on October 25 at the Barrowland Ballroom, Glasgow, and supports The Killers at the Emirates Stadium, London, in June 2022 (ticketmaster.co.uk).

Oh Wonder start a tour on April 7, 2022 at the O2 Guildhall, Southampton (gigsandtours.com).

Kylie Minogue continues to develop her artistic partnership with Years & Years singer Olly Alexander. Having sung on a remix of recent Years & Years single Starstruck, she has now recruited Alexander as a duet partner for her new single A Second To Midnight

The track — a taster for an expanded edition of Kylie’s chart-topping Disco album — takes the singer back to the machine-tooled 1980s pop of her Stock-Aitken-Waterman era, with an auto-tuned Alexander adding contemporary touches. The revamped album, out next month, also features duets with Gloria Gaynor and Jessie Ware.

The 1980s also loom large on a new Clean Bandit version of the Whitney Houston standard How Will I Know. Using Whitney’s original vocals, recorded when the singer was just 21, the British trio give the soaring pop number a synth-heavy clubland makeover.

And on the 50th anniversary of his classic Every Picture Tells A Story LP, Rod Stewart limbers up for forthcoming album The Tears Of Hercules on new track One More Time. Sir Rod’s signature rasp remains in fine form on a sentimental but cheery dig into his past that is illuminated by Mumford & Sons-style banjo and female harmony vocals.