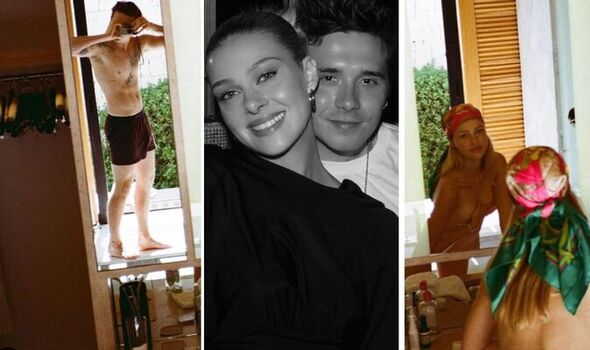 Nicola Peltz Beckham has shared a daring topless selfie with her 2.7 million followers

Brooklyn Beckham appeared on his wife’s Instagram in a daring mirror selfie.

Brooklyn Beckham, 23, has taken to Instagram alongside his wife Nicola Peltz Beckham, 27, in a daring topless shot. Nicola also added a series of other photos to the post which she subsequently shared with her 2.7 million followers.

In the caption to the post, Nicola penned: “Happy 3 years baby. I fall more in love with you every day. I’m so lucky I have you as my husband.”

The photo showed Brooklyn snapping a selfie as Nicola posed playfully in the mirror.

She was dressed in a funky, multicoloured bandana while using her arm to cover her bare cleavage.

The pair were also dressed up, with Nicola in a dark sweater and Brooklyn in a plain white tee in the following snap.

The pair have been in a relationship for three years and married for almost half a year after their wedding in April.

The actress also appeared in Transformers: Age of Extinction as Tessa Yeager.

The star said it wasn’t love at first sight, but instead it took them time to click.

The pair had significant others when they first met at Coachella.

Nicola was dating Paul Klein at the time while Brooklyn was with Chloe Grace-Moretz.