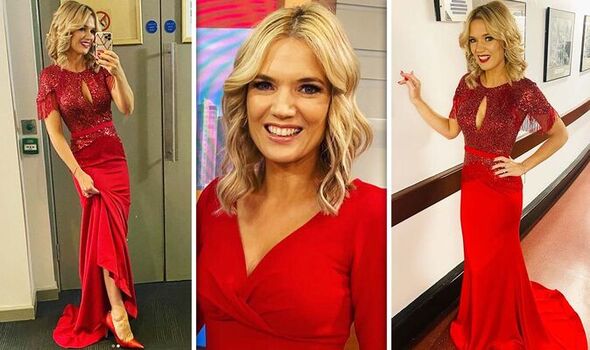 The Good Morning Britain star took to Instagram to share two pictures of the glamorous gown she chose for the occasion with her 243,000 followers.

The floor length dress’ top half was covered in sequins and featured a fringe on either sleeve.

The gown also boasted a keyhole cleavage and a belt cinching at her waist and was completed with a short train.

Despite having her feet covered by the dress, Charlotte showed fans her bright red stilettos as she pulled up her gown to reveal them in a mirror selfie.

The second picture showed Charlotte smiling broadly as she posed backstage inside the emblematic concert hall.

Charlotte finished off her look with a red lip and matching nails and styled her blonde tresses in loose waves.

Charlotte’s floor length dress’ top half was covered in sequins

It also featured a fringe on either sleeve

She looked fabulous in a dress