Chrissy Teigen Reveals She Still Has A ‘Bump’ While Rocking Cutout Dress 2 Mos. After Losing Baby

While mourning that she will ‘never’ be pregnant again, a ‘frustrated’ Chrissy Teigen showed that her body still had a ‘bump’ months after suffering a heartbreaking miscarriage.

“This is me and my body, just yesterday,” Chrissy Teigen wrote on Dec. 23. In the Instagram post, Chrissy, 35, wore a grey cutout dress, her hair in a messy but stylish up-do. The Lip Sync Battle host revealed she was bewildered as to why her body still retained a “bump,” even though it’s been two months since her devastating miscarriage. “Even though I’m no longer pregnant, every glance in the mirror reminds me of what could have been. And I have no idea why I still have this bump, honestly. It’s frustrating.”

“But I’m proud of where this entire journey took my body and mind in other ways,” added Chrissy. “I love being pregnant, so so much, and I’m sad I never will be again. But I am lucky to have two amazing little ones [daughter Luna, 4, and son Miles, 2] who are transforming into big little people more and more every single day. Anyhoo. Love u guys. Xx.”

Sadly, after a pregnancy fraught with complications, Chrissy and her husband, John Legend, announced that they had lost their unborn son. “We are shocked and in the kind of deep pain you only hear about, the kind of pain we’ve never felt before,” the couple said in a statement shared to their social media accounts. Since then, she has been working through her grief and gave an update on Nov. 27. “When I’m old and grey, I will look back on the last two months as being brutal, exhausting, sad, physically challenging, mentally painful bitches of a couple of months,” she posted to her Instagram. 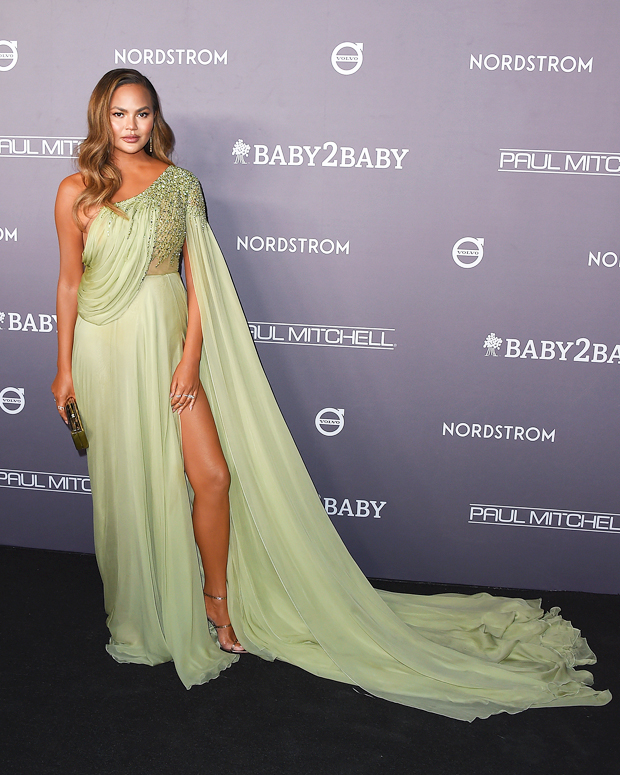 “But I refuse to not find humor in both the rage-fits and the outfits,” she added. “I already see the leaves as orange instead of grey, realized the sky is indeed blue and not black and horn honks on my forced morning walks only bring me to my knees half the time.”

One such lighthearted moment of humor came on Dec. 21, when she shared a video of her in a Hunza G’s bubblegum pink one-piece swimsuit. Chrissy, who had her breast implants removed over the summer, said she had been “standing here for 10 years” while “trying to make my boobs go up, or this go up, or this go down.” Ultimately, after struggling with her breasts, she came to a decision: “I just don’t give a f-ck,” she said.