Chrissy Teigen Shows Off Her Re-Pierced Nose Ring After Original Hole Closed Up: ‘I Did It’

Chrissy Teigen decided to ‘ring’ in the New Year — with a new nose ring! The ‘Lip Sync Battle’ star re-pierced her nostril and showed off the glittery nose jewelry in a new video.

“I did it. Second time’s a charm,” said Chrissy Teigen in the Instagram clip she posted on Dec. 4. In the shot, Chrissy, 35, looks into the camera at an angle that focuses on her nostril. Sure enough, there’s a piece of jewelry there. Chrissy seemed very satisfied with the piercing, and she tagged Brian Keith Thompson (of the world-famous @bodyelectrictattoo) in the post. Considering the disaster that she had the first time she got her nose pierced, Chrissy decided not to mess around with this second attempt.

“So I did this today, and it immediately fell out and healed the second she left because she did it wrong lmao,” Chrissy tweeted on Dec. 28. In the shot, she showed off her nose piercing, the skin around the jewelry slightly red. “Like how do you do it wrong? It’s a hole, through the nose. It’s like Jerry Seinfeld‘s bobsledding joke. It’s impossible to do wrong,” she added, before correcting herself. “Wait, actually, it was the luge.” As for her nose, it seemed that Piercing/Tattoo Twitter got all up in Chrissy’s mentions. “It’s out and healed. You don’t have to keep being a–holes. Thanks, I’ll do it better next time for you. I promise!! U sweet little angels never cease to surprise me.”

Chrissy’s piercing news comes days after she and John Legend celebrated a sober New Year’s Eve. “mom and dad wishing you a happy, healthy and beautiful new year blessed with the purest joys and most positive ~*v i b e s*~” she captioned a photo of her sitting by John, 42, each sporting bedazzled faces. On that day, she also shared a video of her peeling apples. “cinnamon rolling into the new year lol sober new year is l i t.” At the end of 2020, Chrissy revealed that she had a month of sobriety under her belt, and she shared why she made the huge decision to stop drinking. 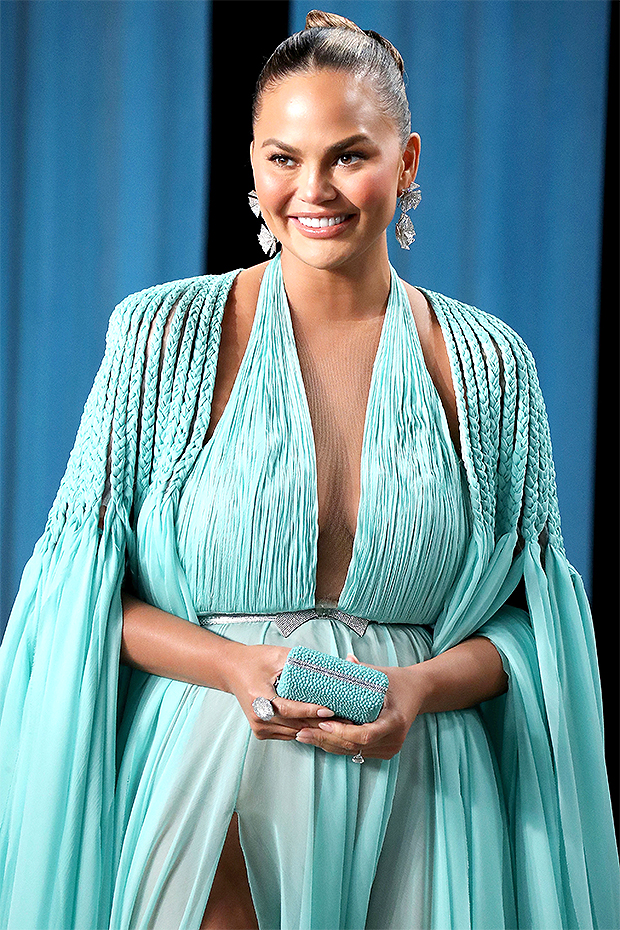 “One month ago, on my birthday, I got this book from my doctor and friend,” said Chrissy. The book, Quit Like A Woman by Holly Whitaker, was an eye-opener for Teigen. “I was done with making an a– of myself in front of people (I’m still embarrassed), tired of day drinking and feeling like sh-t by 6, not being able to sleep. I have been sober ever since, and even if you can’t see yourself doing it or just plain don’t want to, it’s still an incredible read.”