The YouTube star, best known for her persona as Miranda Sings, admits that giving birth earlier than the expected date is ‘the most emotional, unexpected, confusing, uncomfortable and intense experience’ she’s ever had.

The 34-year-old social media star announced the exciting news via Instagram on Wednesday, November 10. Alongside a photo that saw her in hospital bed holding the twins, a boy and a girl, she wrote, “My sweet babies decided to come early. Video of the birth is linked in my bio if you want to go see the magical chaos that happened this weekend.”

Colleen went on to detail more of her babies’ arrival on her Instagram Story. “My water broke and so I straightened my hair,” she captioned a photo of her straightening her hair while standing in her room. “And yes…I’m wearing a diaper.”

In a following Story, Colleen shared a photo of her newborn babies in NICU. “First photo I saw of my babies. [broken heart emoji],” the comedian wrote over the snap. She then thanked the medical staff as saying, “So grateful for my doctors and the NICU staff for keeping them safe and healthy.”

“This has certainly been the most emotional, unexpected, confusing, uncomfortable and intense experience I’ve ever had,” Colleen explained. “My heart is bursting with love for my little cuties and it breaks my heart every time I have to leave them. But we are surviving and the babies are doing great for their age! I’m so proud of them.” 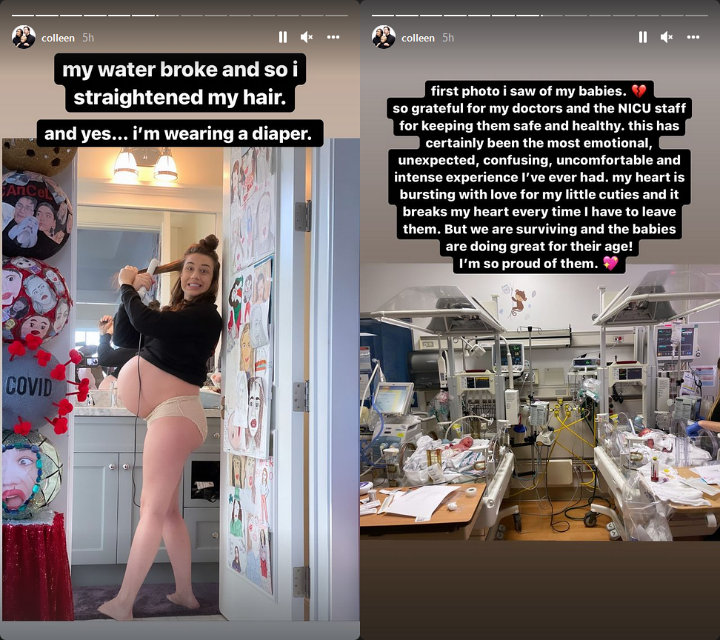 Colleen documented the birth of her twins on her YouTube channel. In the video, she revealed that her babies arrived in an emergency cesarean section as she had a “dangerous umbilical cord complication called cord prolapse.” Her original due date was December 27.

Colleen first unveiled her pregnancy in May, sharing that she was expecting again after having previously suffered a miscarriage. “I’m having DiDi twins, scientifically known as a dichorionic diamniotic pregnancy,” she announced at that time, noting that she won’t know if they’re fraternal or identical until they’re born.