Diana Statue Reveal Not Without Tension Amid Royal Brothers Feud

Princess Diana’s statue was unveiled to the public on July 1 in Kensington Palace’s Sunken Garden, one of her favorite spots.

Although Prince William and Prince Harry gave separate speeches at the event, the fact that they stood “shoulder-to-shoulder” gave hope for their future, according to the Daily Mail. The brothers reportedly put their differences aside for the event as William was seen “talking earnestly to his brother.” Another source told the outlet that the brothers were in contact due to England’s soccer win on June 29. “It is still far from good between them,” the source said. “But there has apparently been an exchange of messages, particularly about the football, which is a step in the right direction, if only to do honor to their mother.”

However, royal reporter Omid Scobie claimed the unveiling was about Diana and not the place for a “public reconciliation.” “Professionalism” was the name of the game here, he said. Despite the seemingly happy overtones, there was allegedly some tension at the event. Keep reading for more details. 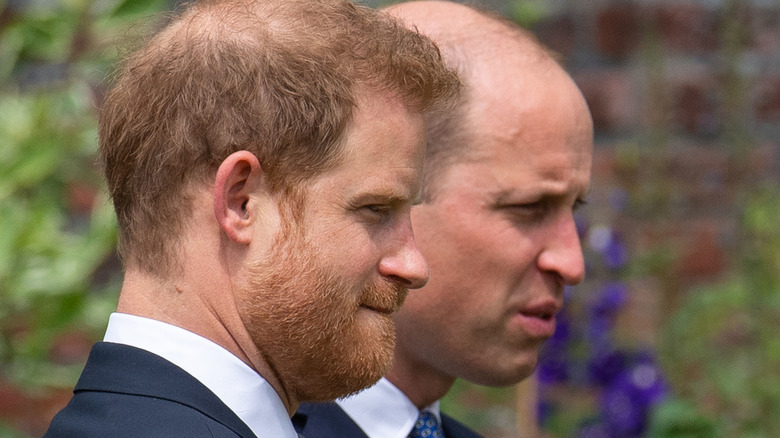 Even though Prince William and Prince Harry seemed to put on a united front at Princess Diana’s statue unveiling, their feud allegedly damper on the event, per TMZ.

The unveiling was originally supposed to be a “large gathering” to honor their mom, per the outlet, but the brothers chose to only invite close relatives; the reduced guest list was reportedly due to COVID-19 restrictions. However, Sun photographer Arthur Edwards claimed there is plenty of room to socially distance at the Sunken Garden, and pointing out that over 40,000 soccer fans packed Wembley Stadium on June 29. He believes the real reason so few people attended was due to the brothers’ ongoing “friction.” “It is sad the queen, Prince Charles and other members of the royal family who were close to Diana can’t be there,” Edwards said.

However, a source told Us Weekly that “the royals wanted to keep it very personal and not have many family members in attendance since that would be a takeaway from the special moment.” The insider also alleged that Prince Charles didn’t attend because he didn’t want to be a “distraction.” Queen Elizabeth reportedly “watched from afar.” Although the guest list was trimmed down, Diana’s siblings Earl Charles Spencer, Lady Sarah McCorquodale and Lady Jane Fellowes were there.

Per TMZ, there is another Diana tribute in September, so hopefully more royals can honor her then.