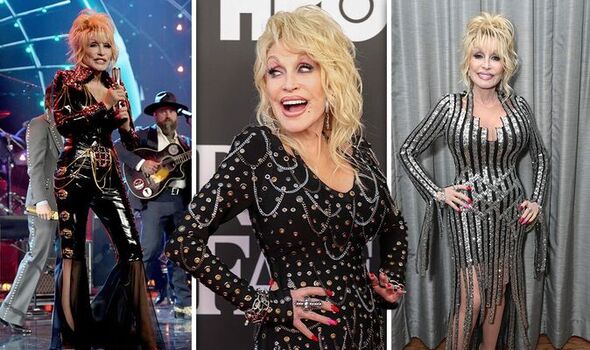 Dolly Parton, 76, looks younger than ever as she poses up a storm in an embellished dress

Dolly Parton made sure to pose up a storm as she arrived at the 2022 Rock and Roll Hall of Fame ceremony in Los Angeles last night.

Dolly Parton, 76, looked younger than ever as she posed in an eye-catching fitted dress, covered in silver embellishments and sequins.

The Jolene singer showed off her petite waist as the dress drew in her phenomenal figure, along with featuring long black fabric elements.

Her signature blonde tresses were styled in elegant curls, allowing her long locks to flow effortlessly past her shoulders.

Dolly singer looked incredibly youthful as she flashed a big smile for the cameras on the star-studded red carpet.

She showed off her incredible flawless complexion as she sported a nude lip and smokey eye look for the event.

Dolly also realised one outfit was not enough for the event, with the singer wearing a total of three outfits throughout the evening, including a racy latex catsuit for her rock and roll performance.

Dolly Parton showed off her wrinkle-free appearance as she posed with a full-face of makeup, featuring a nude lips and a smokey-eye, along with heavy face makeup.

Dolly Parton showed off her sense of style

Dolly Parton posed in a black mini dress covered with silver embellishments hanging from black fabric. The dress made sure to draw in Dolly’s petite waist.

Dolly Parton styled her signature blonde tresses in an elegant curled look, allowing her lovely locks to flow down her shoulders perfectly. Later on in the night, Dolly wore a catsuit to perform at the event, showing off her ageless figure.

She also underwent another outfit change on the show as she accepted her award in a silver and black striped tight-fitted maxi dress. Dolly Parton was joined at the event by the likes of Pink, Olivia Rodrigo, Duran Duran and Lenny Kravitz. The special ceremony was held to induct a total of 14 new members into its renowned Hall of Fame, including Dolly, Pat Benatar, Eminem, and Duran Duran.

Dolly Parton has remained a prominent figure in the music industry

Dolly Parton has received a total of 11 Grammys, along with a huge 50 nominations throughout the course of her lengthy career. The singer was inducted into the Country Music Hall of Fame in 1999, but initially was hesitant to enter the Rock and Roll Hall of Fame when she received the esteemed nomination this year.