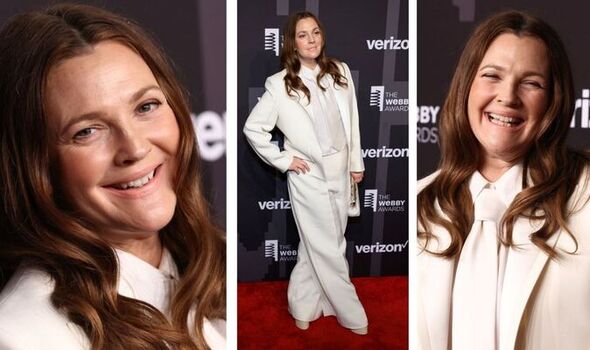 Drew Barrymore at the Webby Awards

Glamorous 47-year-old actress Drew Barrymore has pledged to age as gracefully and naturally as possible to avoid getting any cosmetic tweakments. Last night, the star paraded her all natural look at the 26th annual Webby Awards, to the delight of the crowds.

The Santa Clarita Diet actress, who also runs a self-titled podcast show, took home a Special Achievement award, presented to her by makeup artist Patrick Starrr, on the night.

Her cheeks looked plump and full of healthy volume, while she boasted a blemish-free complexion.

She showed up at the prestigious event dressed in a chic white trouser suit complete with a matching silky tie.

The picture of fashionable simplicity, she accessorised her look with beige shoes and a modestly-sized white bag.

During an episode of her talk show, Drew addressed her decision to stay away from injectables or invasive cosmetic treatments.

“I’ve never done anything to my face and I would like to try not to,” she explained.

Revealing her sadness about those who “torture” themselves to fit in with a beauty ideal, she added another reason why she needed to stay off the cosmetic enhancements.

“I’m a highly addictive person. I do one injection, I’m going to look like [surgery enthusiast socialite] Jocelyn Wildenstein by Friday!”

Drew Barrymore scooped an Achievement Award at the Webby Awards 2022 ceremony, which was presented to her by Patrick Starrr

Drew Barrymore was delighted to be honoured with an award

Whe Drew Barrymore’s name was read out, the star gasped in delight

Drew Barrymore struts her stuff on the red carpet