Eddie Van Halen’s son, Wolfgang, opened up about mourning the death of his father and what it was like to remain by his side for his final years.

Wolfgang, 29, sat down for an interview with Howard Stern for his SiriusXM show where he opened up about the loss of his dad, describing his current state as “awful.” Although he’s still trying to process the situation, he noted that he’s grateful for the overseas treatment the Van Halen frontman underwent that gave him more time with his dad than doctors projected.

"At the end of 2017, he was diagnosed with stage four lung cancer and the doctors were like, 'You have six weeks,'" he told Stern. "And then he went to Germany, overseas. Whatever the f— they do over there, it's amazing because I got three more years with him."

Wolfgang was the one to confirm the news of his father’s death with a note on Twitter last month.

“I can't believe I'm having to write this, but my father, Edward Lodewijk Van Halen, has lost his long and arduous battle with cancer this morning," he wrote at the time.

"He was the best father I could ever ask for. Every moment I've shared with him on stage and off stage was a gift," Wolf continued at the time. "My heart is broken and I don't think I'll ever fully recover from this loss."

Now, the late guitarist’s son is releasing music of his own, having recently released a song titled “Distance,” a tribute to his dad that was partly written before his death. Stern noted that, because Wolfgang and Eddie shared a musical bond, the song is an incredibly moving tribute from a son to his dad. 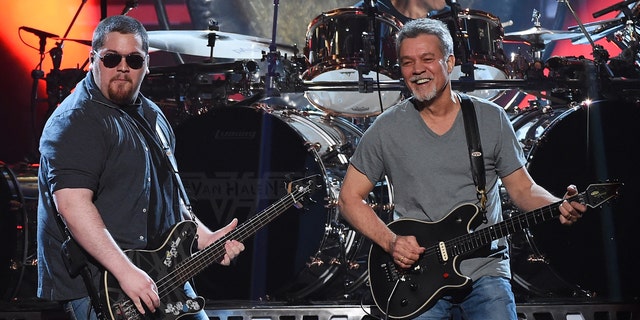 “That’s the gift and the curse of it, is that we had such a close connection and now for the rest of my life there’s no way I’ll never be able to think about him no matter what I do, which is good, but it also hurts a lot,” Wolfgang explained.

Elsewhere in the interview, the 29-year-old musician noted that it’s been difficult to deal with fans over the past few years who wanted nothing more than to see new music and tours.

"I was rehearsing at the end of 2018 but things happen and it's like, 'Do I want to go out on tour for an 18-month cycle or do I want to be with my dad?' and I think I made the right choice," he said, according to People. "People have no f—ing idea what anyone is going through at any time. And people giving me s—, because it's taken so long to put my album. If you had any idea, you guys would feel like s—."

He went on to quell rumors that he will reunite with the remaining members of Van Halen and replace his dad on tour.

“You can’t have Van Halen without Eddie Van Halen and I’m not my dad. I’m not going to replace him. I’ve spent my life making sure I’m not like him and I’m my own person. My dad, again, he’d be p—ed off. He’d be like ‘what the f– are you doing? Go do your sh–,’” Wolf said.

He continued: “Some things just suck and this is one of those things. You can’t have Van Halen without Eddie Van Halen.”