There seem to be blurred lines between the truth and the allegations leaked from Emily Ratajkowski’s upcoming book about Robin Thicke. The model is now speaking out.

Emily Ratajkowski wants to set the record straight — sort of. While attending the red carpet at CoinGeek New York in NYC on October 4, the celebrated model, 30, addressed recent headlines involving Robin Thicke, 44, and the “Blurred Lines” music video set. Over the previous weekend, it was reported that Emily accused Robin of “groping’ her on the set of the video back in 2013 in her upcoming book, “My Body.” But it seems the reports don’t have the whole story right. 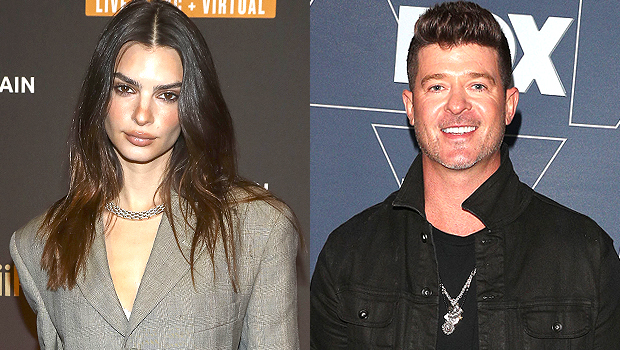 “What’s frustrating is I didn’t come out with it, it was leaked,” Emily told Extra at the event. “It’s been hard for me, I really like to have control over my image and I wrote this book of essays to share the whole story and all sides of it, and I feel like it turns into a clickbait frenzy and all of a sudden words like ‘sexual assault’ and ‘allegations’ are getting thrown around rather than people reading the actual essay… I’m just looking forward to when people will be able hear things in my own words,” the new mom added.

Robin has yet to address the story publicly (HollywoodLife has reached out to his team for comment as well), but Emily hopes that when her book finally releases, all will be explained and readers will gleam more than just what’s been made into headlines. “Everything I talk about is about the evolution of my politics and it’s not some big reveal, it’s not some crazy thing, it’s a part of a larger essay,” she told Extra. “I’m just excited for people to hold nuance and understand that.”

Per reports, Emily writes in her new book that Robin groped her bare breast while they were shooting the 2013 music video. “Suddenly, out of nowhere, I felt the coolness and foreignness of a stranger’s hands cupping my bare breasts from behind. I instinctively moved away, looking back at Robin Thicke,” she reportedly writes. The “Blurred Lines” music video featured Emily, as well as two other models. It ultimately shot her to fame.

Emily’s book, “My Body,” is on sale November 9. You can preorder it HERE.