Eric Trump defended the charges against the Trump Organization, but perhaps his proof wasn’t as strong as he hoped. The Associated Press reported that the Trump Organization and chief financial officer Allen H. Weisselberg were charged on July 1 with running a 15-year “sweeping and audacious” tax fraud scheme.

According to the AP, the indictment states that the Trump Organization and Weisselberg allegedly conspired to pay executives off the books by giving them fringe benefits, including apartment rent, car payments, and school tuition. Former President Donald Trump was not charged, but he had plenty to say about the developments. The AP reported that the former president made a statement using familiar “Trumpy” language, calling the case a “political Witch Hunt by the Radical Left Democrats.” Former federal prosecutor Daniel Goldman said charges against the Trump Organization would “be almost a death blow” to the company. Goldman tweeted, “I can’t underscore enough how devastating an indictment would be to the Trump Org. Every lender would call their loans and no way Trump Org can pay them all, likely leading to bankruptcy.”

So what did Donald Trump’s youngest son Eric have to say about the Trump Organization’s troubles? Some might be surprised by his response.

Eric Trump cited support from across the pond 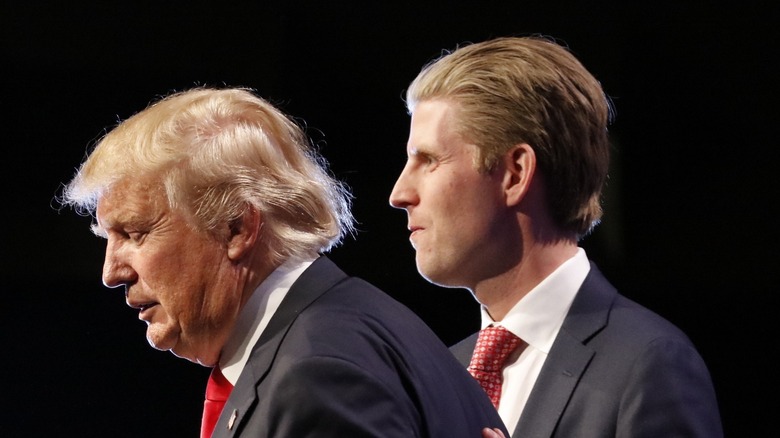 On June 30, Eric tweeted, “Top comments on the Daily Mail which really say it all. People have seen this movie before.” One comment read, “They are terrified of his [Trump’s] comeback in 2024,” while another wrote, “Absolutely pathetic charges.” Reader comments might not be the strongest defense, but he’s trying. Eric needs more than reader comments to create a defense because the company and CFO Allen Weisselberg are charged with 15 felony counts, per The New York Times. Yikes! Andrew Weissmann, who was the top attorney for the Mueller investigation on Donald Trump and spent 20 years at the Department of Justice tweeted about the situation, “Prediction: the charges brought today in Manhattan are the tip of the iceberg. Note DA request for a protective order to keep discovery close to the vest while the investigation continues.”

Of course, Eric could try the defense technique his dad Donald Trump has used tried for years — aka blaming the “witch hunt” and “deep state.”