A former TMZ employee testified on Wednesday at Johnny Depp and Amber Heard’s defamation trial and lifted the curtain on how some stars work with the paparazzi.

Morgan Tremaine was called as a rebuttal witness for Depp, despite TMZ’s parent company EHM production trying to block that from happening. Tremaine worked as field assignment manager and was in charge of about 20 paparazzi in Los Angeles. When asked who usually tipped off TMZ, he explained, “Oftentimes it would be publicists, managers, agents or B-list celebrities… and lawyers, definitely.”

Tremaine testified that he was instructed to dispatch photographers to a Los Angeles courthouse on May 27, 2016 — the day Heard filed for a temporary restraining order from Depp. He said his news producers would not have given him that assignment without verifying the credibility of the source who sent the tip that Heard would be filing a TRO. 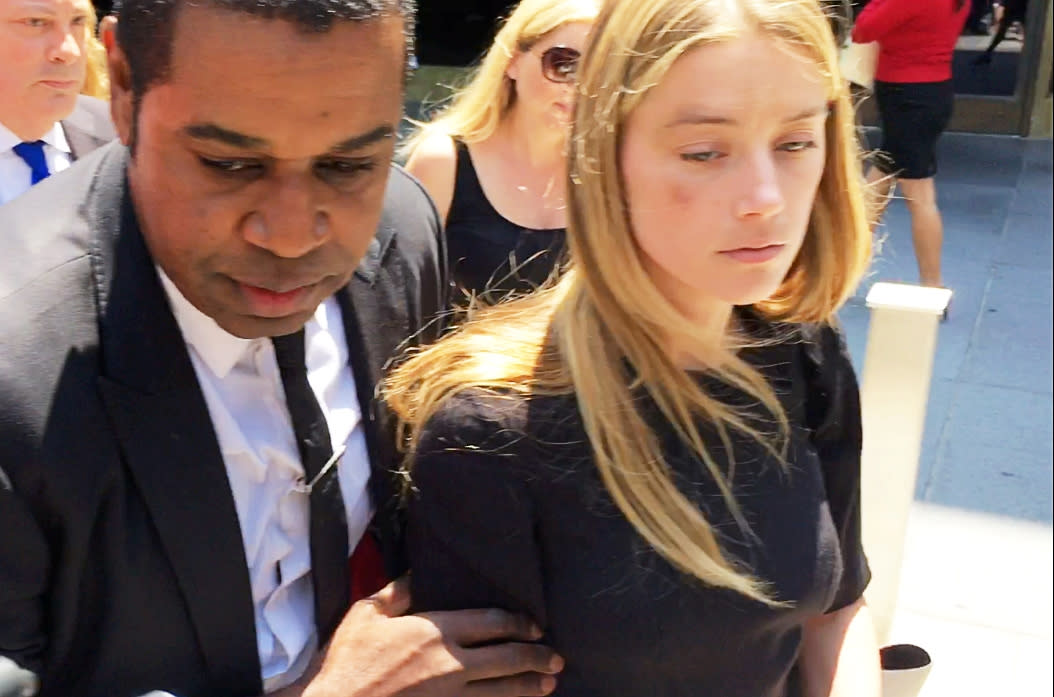 When asked if TMZ got the shot, Tremaine replied, “We did.” (Heard previously denied working with TMZ.)

“Their objective was to capture her leaving the courthouse and she was going to sort of stop and turn toward the camera to display the bruise on the right side of her face, the alleged bruise” – TMZ employee#JohnnyDepp#AmberHeardpic.twitter.com/rClxduUEWm

Tremaine said he was assigned to photograph Heard amid the actress’s contentious divorce on three other occasions. On Aug 6. 2016, he was instructed to dispatch paparazzi to a parking lot adjacent to the law office where Heard was set to appear for a deposition.

“No, not at all,” Tremaine replied.

“Did you get the shot of Ms. Heard?” Vasquez asked

On August 12, 2016, Tremaine testified that TMZ received a “video depicting Johnny Depp slamming some cabinets that was captured by Ms. Heard.”

“The video was sent in through our email tip line,” Tremaine explained. He confirmed TMZ owns the copyright to the video.

“How does TMZ obtain copyright over images and videos?” Vasquez asked.

“The only way to obtain copyright over media would be if we shot it ourselves, if it was sent to the tip line and the source verified it was from the original copyright owner and then either purchased from that person or given to us and then the third option would be if it was directly given to us by the copyright holder like a direct source,” Tremaine replied.

Tremaine said TMZ was able to verify the source so quickly, they got the video up in 15 minutes. He also told the jury the video they posted was edited.

“It was much shorter than the video that’s been played in this trial,” Tremaine testified. “There was a bit at the beginning that was played here in which Ms. Heard is seemingly sort of setting up the camera and getting into position. And then, there’s a bit at the end where she’s seemingly snickering and looks at the camera. That part was not present in what we received.”

When asked if TMZ edited the video, he replied, “No. Not even a little.”

Tremaine testifes the video of #JohnnyDepp slamming the kitchen cabinets TMZ recd was shorter than the one played in trial. He said the beginning where #AmberHeard sets up the camera and the end where “she seemingly snickering and looks at the camera” was not in the one we recd. pic.twitter.com/PcnZW5KYxw

During cross-examination, Heard’s lawyer accused Tremaine of seeking his “15-minutes of fame.”

“I stand to gain nothing from this. I’m actually putting myself kind of in the target of TMZ, a very litigious organization. And I’m not seeking any 15-minutes here,” Tremaine replied. “I could say the same thing about taking Amber Heard as a client, for you.”

Depp and his lawyer, Ben Chew, seemed to find that answer amusing.

Cross-exam:
Bredehodt: “This gets you your 15 minutes of fame, doesn’t it?”

Tremaine: “I could say the same thing about taking #AmberHeard as a client, for you.”#JohnnyDepppic.twitter.com/OaCXIwJwWR

When Heard was cross-examined earlier this month, Depp’s lawyer accused the actress of staging “a photoshoot” at the courthouse when filing her TRO.

“What does that get me? If I wanted to leak things about Johnny I could have done that in much more successful way, in a bigger way for years,” Heard said, denying she tipped off TMZ.

“Not when you were extorting him for $7 million,” Vasquez said, referencing the divorce settlement Heard received.

“I got a fraction of what I was entitled to in the state of California by the way,” Heard replied. “What extortion?”

MORE: Kate Moss testifies that Johnny Depp “never pushed” or “threw me down any stairs”