Forbes Warns Companies Not to Hire McEnany, Other Trump 'Fabulists'

“Forbes will assume that everything your company or firm talks about is a lie,” magazine’s chief content officer says 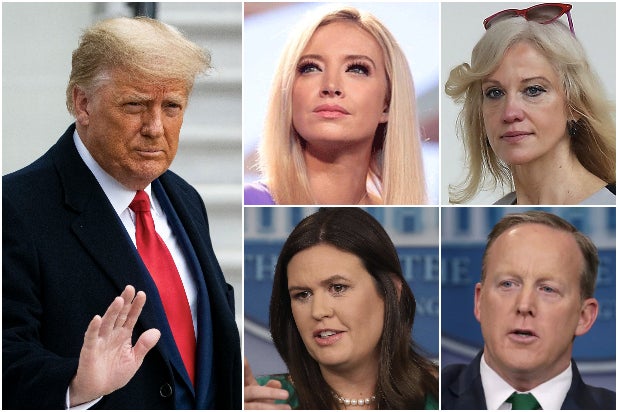 In a new Forbes op-ed, Donald Trump’s parade of White House advisers and press secretaries are taken to task for perpetuating the “lies-upon-lies, repeated frequently and fervently” by the president. And what better way to punish those spreaders of untruth than by warning the businesses who hire them in the future?

The insurrection of Trump supporters Wednesday at the U.S. Capitol that led to five deaths was “rooted in lies,” Forbes COO Randall Lane wrote in a piece published Thursday. “Such lies-upon-lies, repeated frequently and fervently, provided the kindling, the spark, the gasoline.”

Trump’s propensity for “shamelessly exaggerating and prevaricating” information hasn’t surprised Lane, but, he says what is more astonishing is “the number of people willing to lend credence to that obvious mendacity on his behalf.”

“In this time of transition – and pain – reinvigorating democracy requires a reckoning. A truth reckoning. Starting with the people paid by the People to inform the People,” Lane said. He’s talking to you, Kayleigh McEnany, Kellyanne Conway, Sarah Huckabee Sanders, Sean Spicer and, oh, you all know who you are.

“As someone in the business of facts, it’s been especially painful to watch President Trump’s press secretaries debase themselves,” Lane wrote. “Yes, as with their political bosses, spins and omissions and exaggerations are part of the game. But ultimately in PR, core credibility is the coin of the realm.”

The distrust of information coming out of the White House began on day one of the Trump administration, when Spicer exaggerated the inauguration crowd size, demanding people believe what he was saying and not what their eyes were seeing, Lane pointed out. And that was just the beginning.

“The next day, Kellyanne Conway defended Spicer’s lie with a new term, ‘alternative facts,’” Lane wrote. “Spicer’s successor, Sarah Huckabee Sanders lied at scale, from smearing those who accused Trump of sexual harassment to conjuring jobs statistics. Her successor, Stephanie Grisham, over the course of a year, never even held a press conference, though the BS continued unabated across friendly outlets. And finally, Kayleigh McEnany, Harvard Law graduate, a propaganda prodigy at 32 who makes smiling falsehood an art form. All of this magnified by journalists too often following an old playbook ill-prepared for an Orwellian communication era.”

With a new administration on the horizon, Lane said that now is the time to “return to a standard of truth when it comes to how the government communicates with the governed. The easiest way to do that, from where I sit, is to create repercussions for those who don’t follow the civic norms.”

He believes that the way to do that is to not “let the chronic liars cash in on their dishonesty.” And by that, he means: don’t hire them.

“Let it be known to the business world: Hire any of Trump’s fellow fabulists above, and Forbes will assume that everything your company or firm talks about is a lie. We’re going to scrutinize, double-check, investigate with the same skepticism we’d approach a Trump tweet. Want to ensure the world’s biggest business media brand approaches you as a potential funnel of disinformation? Then hire away.”

Lane insists what he is proposing isn’t cancel culture or even politically motivated. ” It’s just a realization that, as Daniel Patrick Moynihan famously said, in a thriving democracy, everyone is entitled to their own opinions, but not their own facts. Our national reset starts there.”

You can read his entire piece by clicking here.