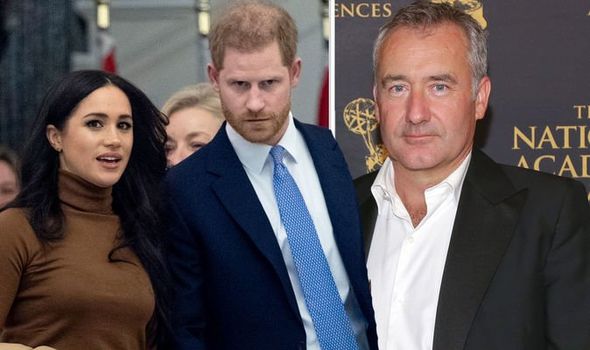 According to Ipsos Mori data, Prince Harry, 36, and Meghan Markle, 40, have slumped further in UK opinion polling, than Prince Charles at the time of his divorce from Princess Diana. The royal split led to a 40 point plunge on whether he would make a good king. Since they stepped back senior royal duties, Prince Harry and Meghan have dropped 50 points in the UK approval rating.

The pair proved to be much more popular back in 2017, when they announced their engagement.

GB News presenter Colin Brazier shared Newsweek’s article on his Twitter page WHEN, where he has 47,000 followers.

Reacting to the report, he wrote: “Plummeting popularity in Britain is the price you pay for love of skin-deep American celebrity culture, Californian psycho-babble, toxic rolling book deals and Hollywood ‘friends’ who won’t be there for you when the wheel of fame turns half a screw.”

One wrote: “What kind of miserable lives do people have to be so obsessed with a couple (who appear to be happy) who have gotten away from a toxic environment, i.e. the English ‘royal’ family and their cloying, infantile supporters?”

A second commented: “I think their plummeting ratings was inevitable after the Oprah Interview.

“They have not helped themselves and their constant trying to preach to the rest of the world.”(sic)

A fourth penned: “Couldn’t have put it better myself!”

Prince Harry and Meghan stepped back from their senior royal duties in March 2020.

In a statement at the time, the couple said they planned to split their time between the UK and North America.

Harry and Meghan said they made the decision “after many months of reflection and internal discussions”.

“We intend to step back as ‘senior’ members of the Royal Family and work to become financially independent, while continuing to fully support Her Majesty The Queen,” the statement added.

They are currently living in Los Angeles with their two-year-old son Archie and baby daughter Lilibet.

Last month, it was announced Prince Harry had signed a deal with publisher Penguin Random House and will release his first self-penned book next year.

In a statement, the father-of-two said: “I’m writing this not as the prince I was born but as the man I have become.

“I’ve worn many hats over the years, both literally and figuratively, and my hope is that in telling my story — the highs and lows, the mistakes, the lessons learned — I can help show that no matter where we come from, we have more in common than we think.”

Publisher Penguin House described the upcoming book in a news release as “an intimate and heartfelt”.

They added it will be an account of his experiences from childhood, being a royal, his marriage and his military service.