Hannity: 'Journalism in This Country Is Dead and Buried' (Video)

“We are in the middle of an information crisis in this country, and media is not coming back to life anytime soon,” Hannity said without irony 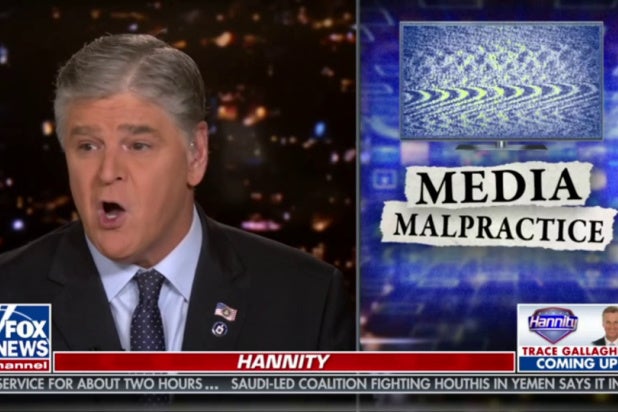 In his first show since Donald Trump’s second impeachment trial ended, Sean Hannity did a lot of complaining about that whole deal. And he reserved a part of his grievance session for folks in the media — “swamp creatures,” he called them. Presumably, he was excluding himself from that categorization even though he’s a member of the media.

“The media had no shortage of complaints about the President’s legal team, and they delivered an epic beatdown with an excellent defense that was put together, oh, in about eight days,” Hannity complained, giving a rather generous assessment to the defense.

“Over the weekend one of the president’s attorneys, actually dealing with a CBS anchor, voiced his frustration with the mob during an interview on that network. Take a look,” he said.

“Hannity” then pulled up a clip of Trump impeachment lawyer Michael van der Veen delivering a screed that sounded an awful lot like something someone might say about Hannity and Fox News.

“The media has to start telling the right story in this country. The media is trying to divide this country. You are bloodthirsty for ratings, and as such, you’re asking questions now that are already set up with a fact pattern,” van der Veen complained.

The clip ended with van der Veen angrily pulling his microphone off his jacket and mumbling, “Yep, citizen. Yep.”

Hannity wasn’t done with the complaints.

“Imagine having almost every news outlet in the country rooting against you — every TV show, every article, every headline, every pundit, every second, every minute, every hour of every day,” Hannity griped, again presumably excluding himself from that categorization even though he has a TV show.

Hannity then tried to wrap up this complaint thread with this strange arrangement of thoughts:

“That’s what this country’s lived through, Donald Trump and his family have lived through, the last five years. And by the way, that is what the president’s lawyers faced over the past few weeks. And this is what President Trump, again, faced for five years,” Hannity complained, possibly getting confused about what he was talking about.

“Journalism in this country is dead and buried. We are in the middle of an information crisis in this country, and media is not coming back to life anytime soon.”

You can watch the quoted portion of Monday’s episode of “Hannity” from media outlet Fox News in the video embedded up at the top of this article.