If Schitt’s Creek is one of your favorite shows, then you and I have a lot in common. I personally can’t get enough of the witty humor, the engaging storylines, and all of the great relationships that formed throughout the series. I’m sure when Daniel Levy’s character, David Rose, found love in Schitt’s Creek, it brought a tear to everyone’s eye, and if you’re like me, then you’re probably curious to know who the Schitt’s Creek cast is dating in real life.

Some of the cast members are dating very interesting people, while others are waiting for the right person to come along. In fact, Daniel’s father, Eugene Levy, has been married for longer than I’ve been alive, and he’s not the only one. Some of his co-stars have already celebrated their 20-year anniversaries, and there are a few cast members who’ve started their own families. So if you want to know more about the Schitt’s Creek cast’s partners, then read below to find out who your favorite stars are dating and what they’re up to in their personal lives. Spoiler alert: Sadly, none of the actors are dating their on-screen love interests off-screen (but their IRL relationships are still really cute). 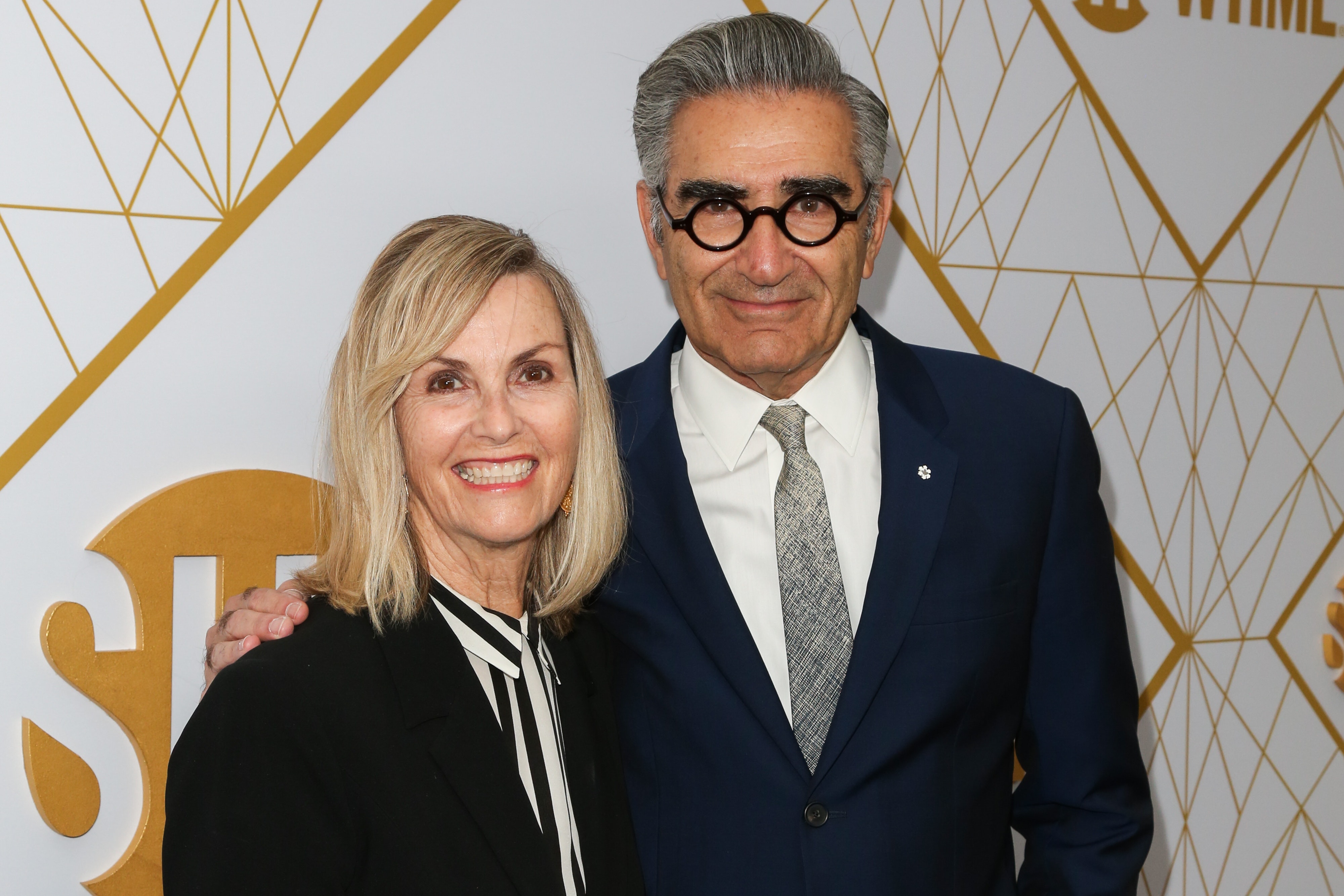 According to Good Housekeeping, Levy and Deborah Divine have been married since 1977. They have two kids, Daniel and Sarah Levy, who both play characters in Schitt’s Creek. Levy started dating the screenwriter in 1973, and when he won his 2020 Emmy for Outstanding Lead Actor in a Comedy Series for Schitt’s Creek, the first person he thanked was his beautiful wife.

"[I want to thank her] for all the love, support, and sage counsel over the years," he said onstage. "I wouldn’t be up here without you, Deb. I love you." Aww! 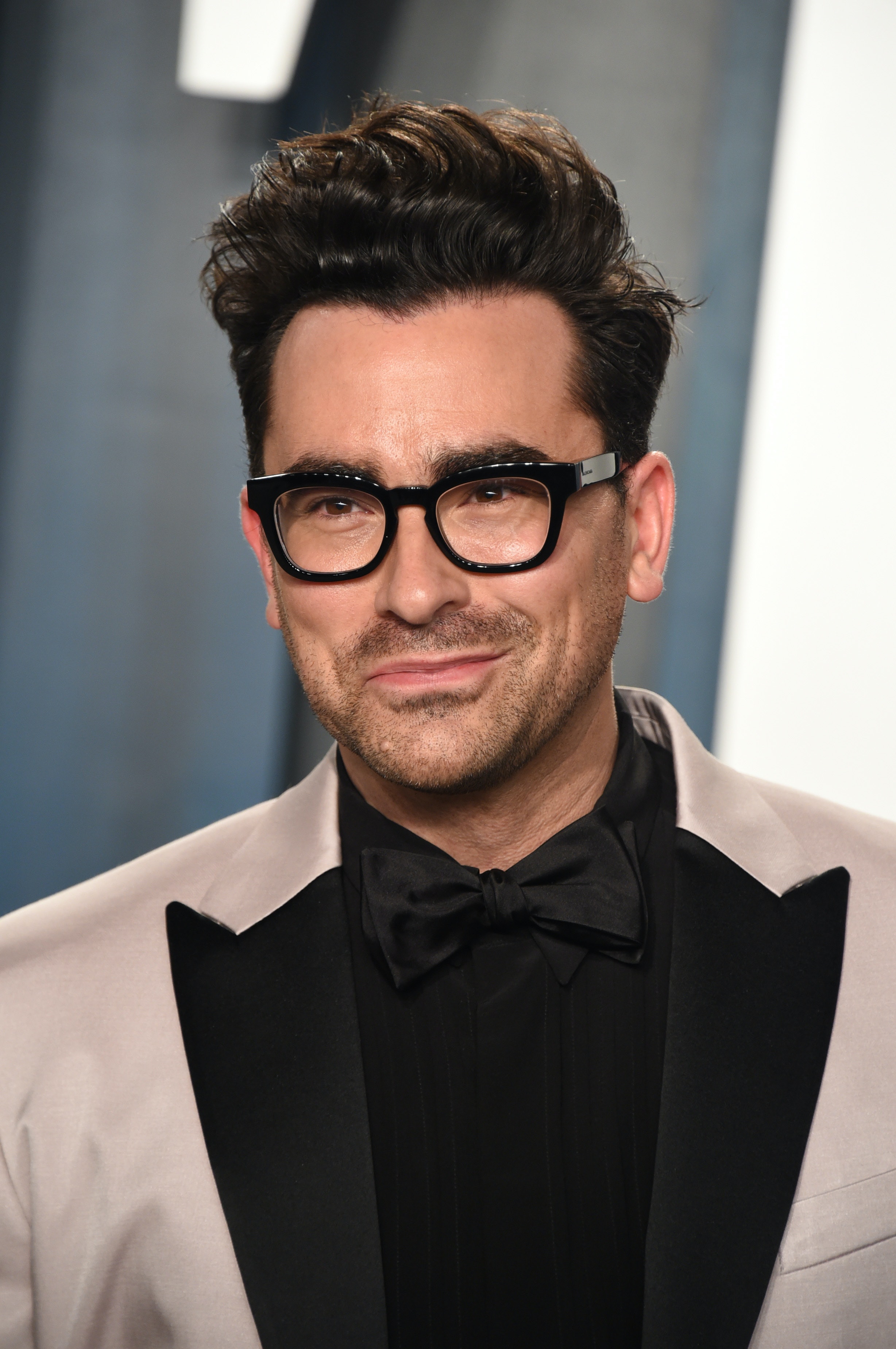 On TV, David Rose and Patrick Brewer got married in a very beautiful wedding ceremony. But in real life, it seems Levy is still waiting to find his Mariah Carey. In a December 2020 interview with Bustle, Levy explained he spent about a year and a half of his life wanting to "run" from most of his relationships because he felt he wasn’t "in any place to be of great value" to any of his partners.

"You then get into these habits where you’re dating people who are totally wrong for you because they’re seeking out people who are a bit damaged," he explained. "And you’re seeking out people who have one foot out the door so that you don’t actually give yourself over in any kind of way." Later, he added, "I really got to a point where I felt like if I didn’t make an active choice to pull myself out of this shell that was becoming such a comfort. I would not be the adult that I [wanted] to be."

Like her dad, Sarah Levy is in a serious relationship of her own. The United We Fall star is dating Agents of S.H.E.I.L.D. actor Graham Outerbridge, and their relationship dates back to at least May 2018, when Levy made her first appearance on Outerbridge’s Instagram. Then one month later, she shared a cute snap of them in Lake Placid. Since then, they’ve been posting plenty of loved-up couples pics, and they even adopted an adorable puppy named Georgie together. 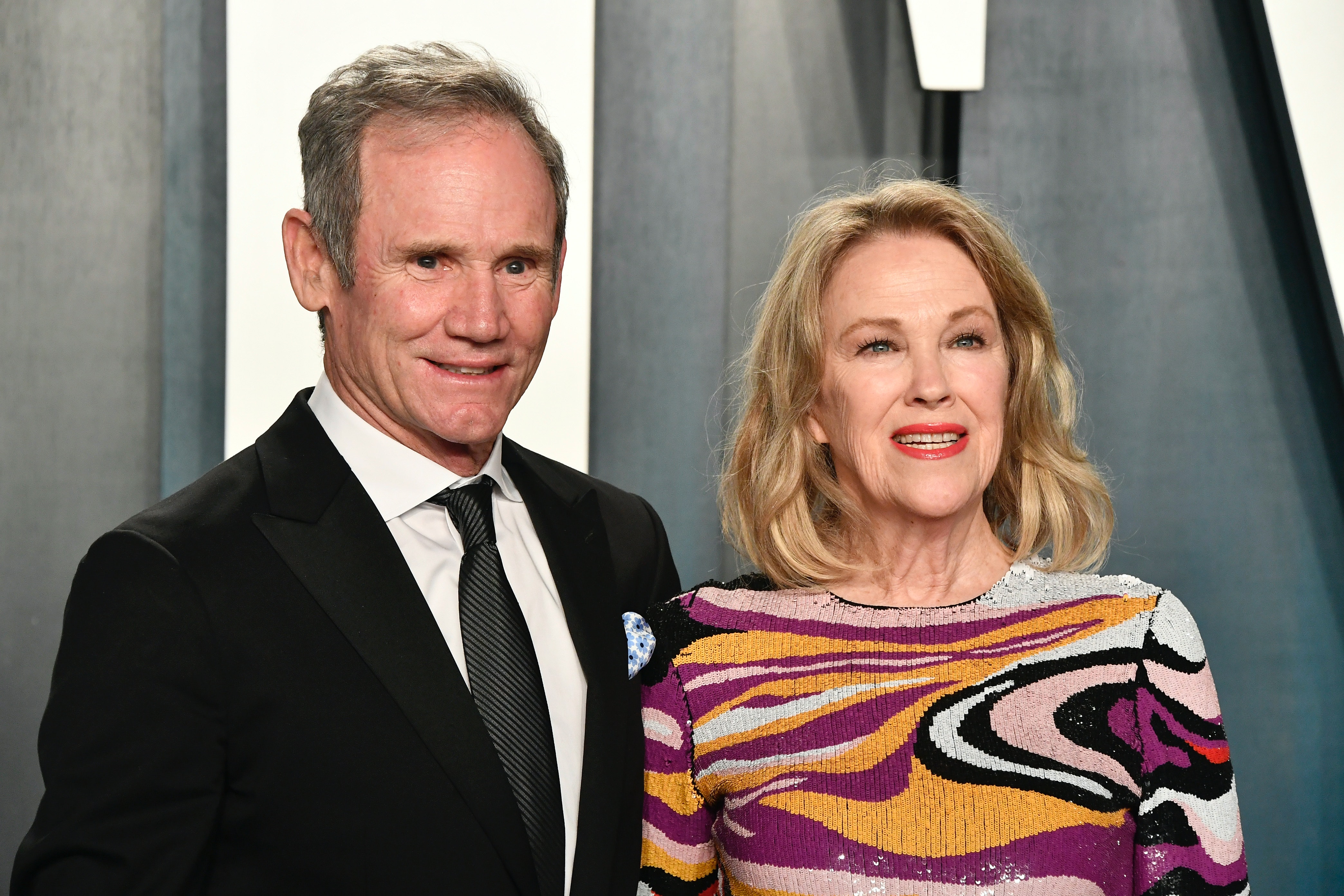 Yes, Catherine O’Hara and Eugene Levy did used to date in the ’70s, but when she met her husband, Bo Welch, in the late ’80s, O’Hara could barely keep her eyes off of the production designer. During a January 2019 interview with The New Yorker, O’Hara said she immediately found her future husband "very attractive," and soon after they started dating, she moved to L.A. to be with him. In 1992, the pair got married and they share their two kids, Luke and Matthew Welch. 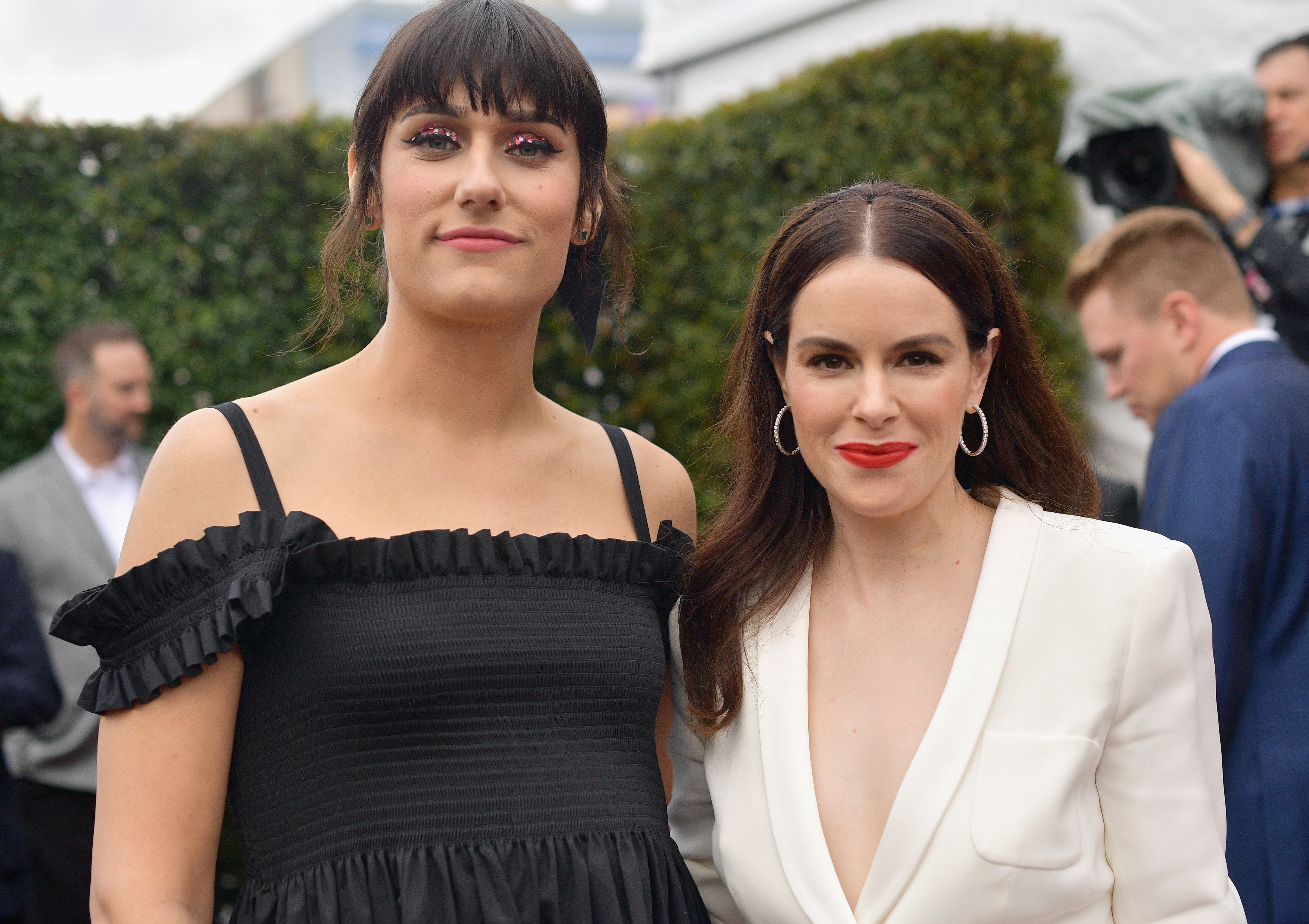 Emily Hampshire appears to be single at the moment, though she has had some notable relationships in the past. Just a few months after becoming IG official with musician Teddy Geiger, Hampshire popped the question in November 2018. Sadly, in June 2019, they called off their engagement and Hampshire hasn’t spoken out about being in a relationship with anyone else ever since.

However, she did walk down the aisle before with former soccer player Matthew Smith. The duo tied the knot in 2006 and were together for nearly 10 years before Smith filed for divorce in January 2015.

In August 2020, Noah Reid married the love of his life, Clare Stone, near Lake Huron, and their wedding day was everything I’d hoped it would be. "We wanted our wedding to feel like a laid-back, outdoor dinner party at a Tuscan villa," Stone told Brides magazine in September 2020. "We throw a lot of dinner parties and enjoy nothing more than sitting across from our friends eating beautiful food, drinking beautiful wine, and laughing late into the night."

The duo shared a bunch of beautiful pics on Instagram from their special day, and I have a feeling they’re having the most amazing time spending the rest of their lives together. 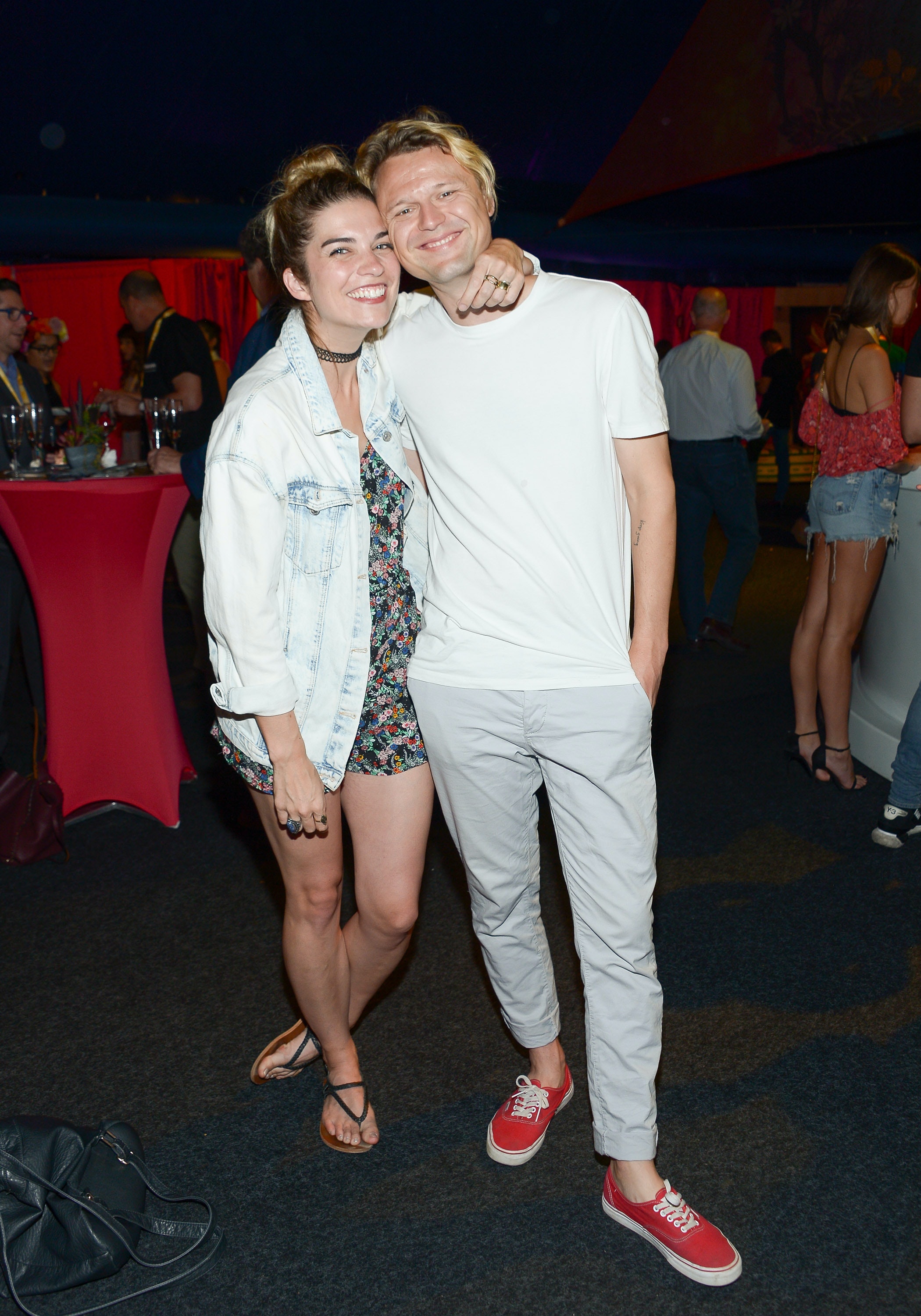 Annie Murphy has been married to musician Menno Versteeg since August 2011. For their seven-year anniversary, she gave him the funniest shout-out ever on Instagram. "Happy belated anniversary, @mennovers," Murphy wrote next to a photo of them both. "I looked it up, and 7 years isn’t actually copper and wool — it’s two muscly German tourists NAMED Koper and Wöl dressed in identical outfits taking pictures on a ferry. You’re welcome. ❤️." How adorable!

And it seems like the two are a perfect pair, because Versteeg actually helped his wife write her character’s iconic song, "A Little Bit Alexis." He revealed how he came up with the hook during a September 2020 interview with Elle magazine. "I’d been in some chain fashion store and ‘Work B*tch’ by Britney Spears was on," he said. "The second [Annie] told me [her idea], I knew I wanted to rip off the feel of that song. We set out to make a song you want to do spin class to." 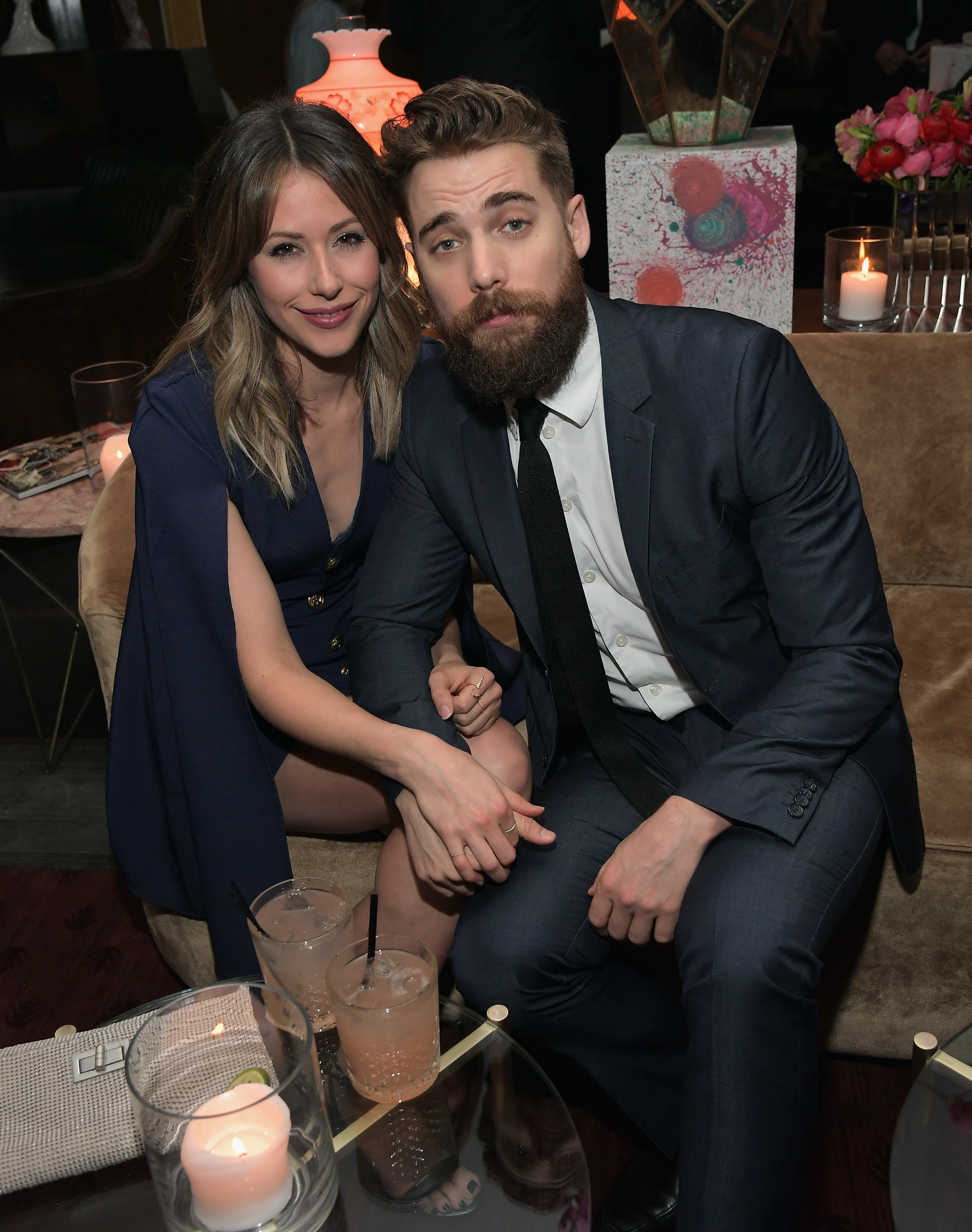 Dustin Milligan is in a serious relationship. The actor has been dating his longtime girlfriend, Amanda Crew, since 2010, and they’ve worked together on a handful of projects. The two co-starred in the indie drama Repeaters and also acted in the HBO Comedy series Silicon Valley. If you ask me, these two were meant to be together. 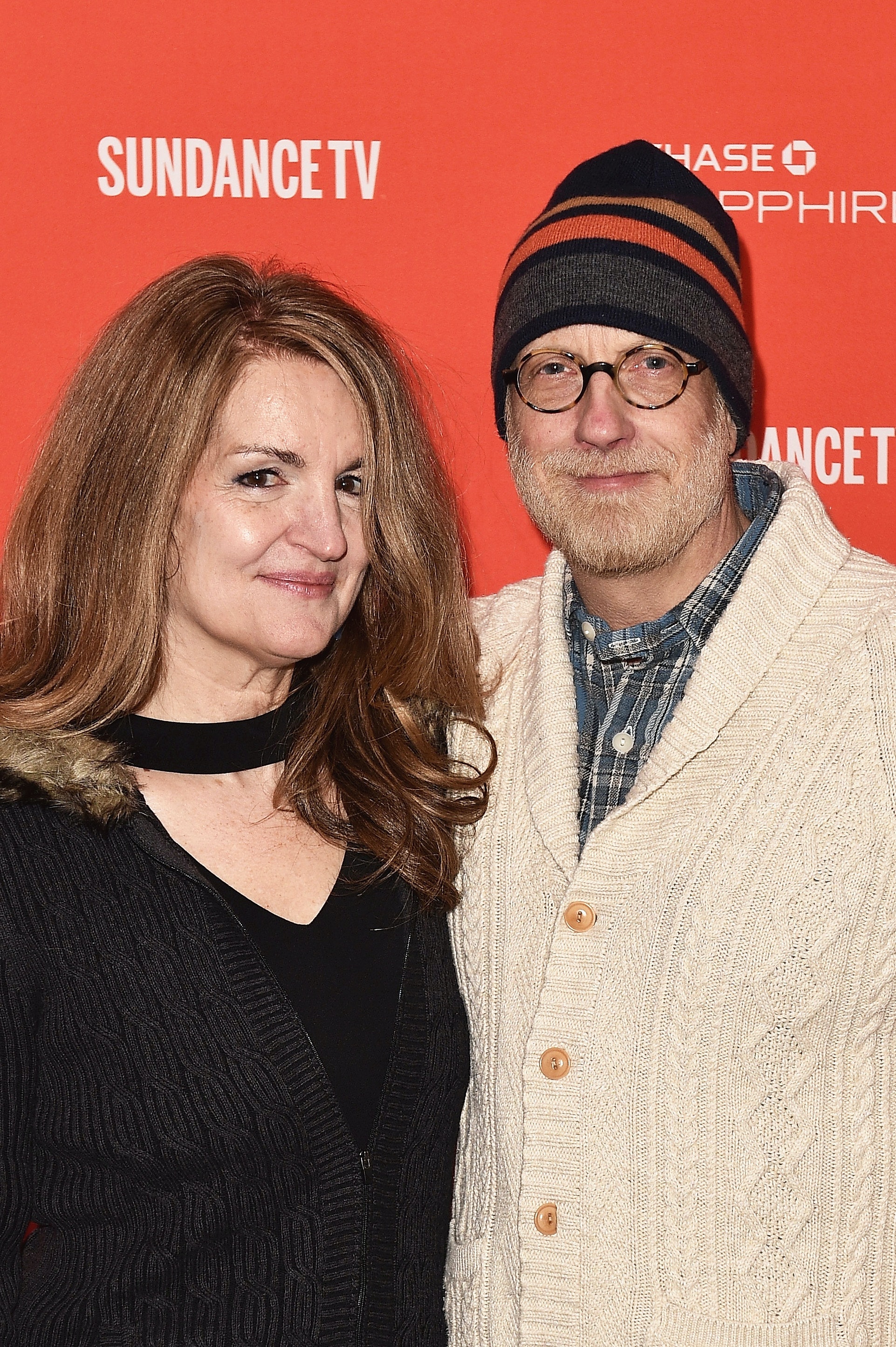 Chris Elliot and Paula Niedert Elliot tied the knot in 1986. One year later, they welcomed their oldest daughter, Abby, and in 1990, they had their second daughter, Bridey. Like Elliot, Niedert is also an actor and she has on-screen credits in movies such as Paper Anchor and Clara’s Ghost. 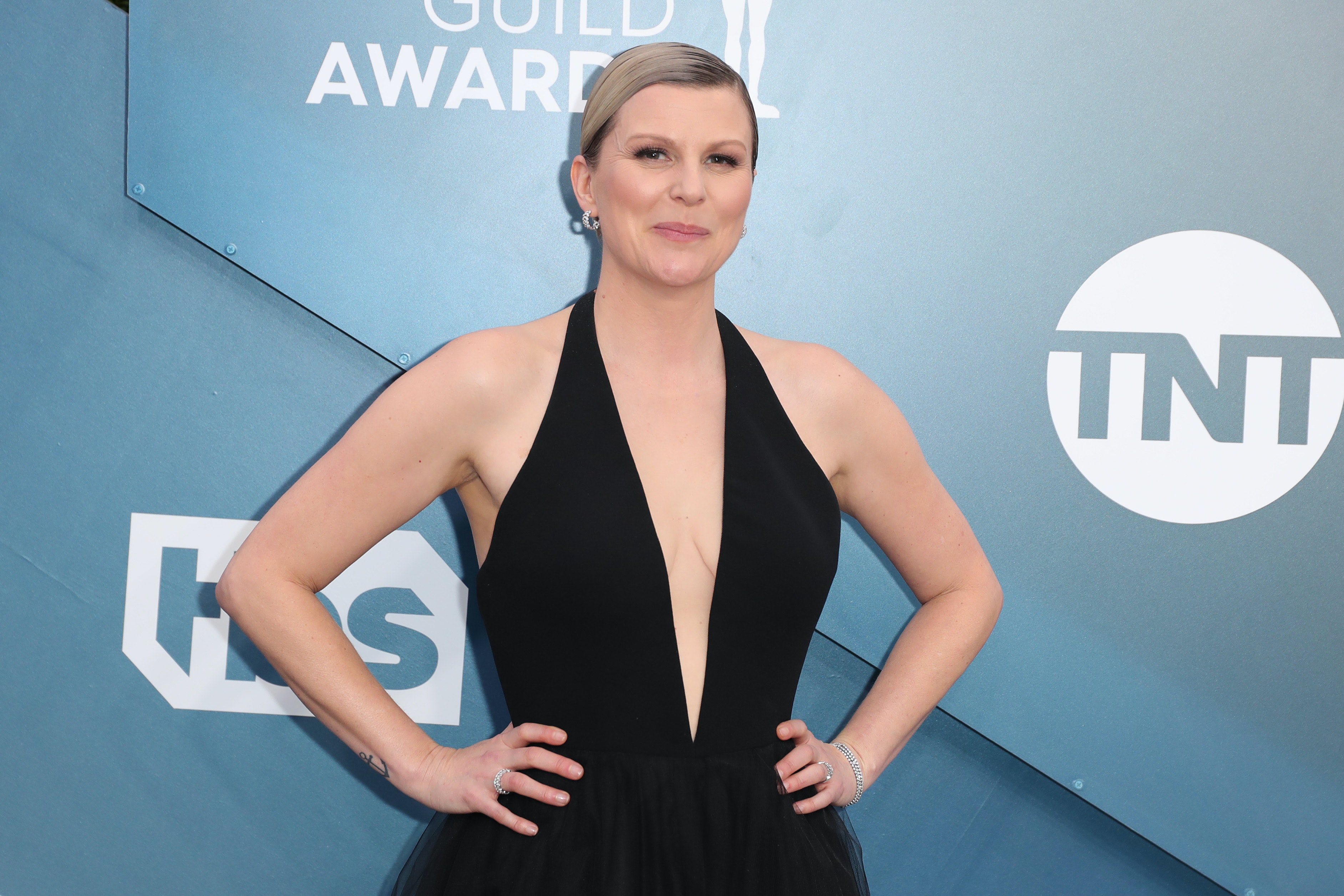 Although there aren’t many pictures of Jennifer Robertson and her beau, Andrew Homeyer, they’ve been engaged since October 2019. Robertson announced the exciting news in an since-deleted Instagram post. “Many of our friends and family already know … this weekend my [love] asked me to marry him, and the answer was absolutely YES!” Robertson gushed at the time. I can’t wait to see the day these two walk down the aisle.

The Schitt’s Creek cast members may not have a lot in common with their funny counterparts, they still know how to put on a pretty darn good show!