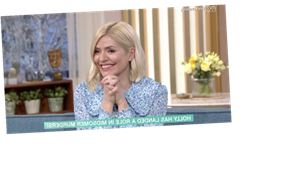 Holly Willoughby has been left in tears as Midsomer Murders actors Neil Dudgeon and Nick Hendrix offered her a role on the hit show.

The This Morning star's co-host and friend Phillip Schofield, 58, revealed he and the team had been going back and forth on how to surprise her with the incredible news on Thursday 18 March.

"We had a brief meeting this morning to discuss how we were best to do this and I think we're best to do it right now and for you to tell my friend here what she doesn't know," Phil said as he kept his eyes peeled on Neil and Nick's face, leaving Holly left wondering.

Confused, 40 year old Holly, who showed off her slender legs in a black mini skirt, questioned: "What don't I know?" to which Neil responded: "About future stars of Midsomers…

"We've all had a big talk about who we want to appear on Midsomer, and we decided we want Holly Willoughby to appear in an episode of Midsomer Murders very soon.

"Holly please, I am emboldened here to offer you a role in Midsomer Murders."

In disbelief, Holly turned to Phil to whisper: "Are you serious?" before clasping her hands up to her mouth. She then screamed: "Yes!" before tearing up and continuing: "I’ve seen every episode since it started way back when.

The blonde beauty, who recently stunned in a green mini dress on the ITV show, added: "I mean, you’re going to have to kill me off really quickly as I’m terrible at acting."

Not dissuaded, Neil responded: "That’s never held us back in Midsomer!" as Nick added: "You're more than welcome! You can be killed off or you can be a murderer…"

Holly then came up with an idea on how she could be killed off from the show as she said: "Can I die by eating chocolate?

"Because I saw an episode where somebody died by eating chocolate and I was like, 'That’s the way to go.'"

"You can be eaten by badgers or something," Neil replied as Nick added: "Yes, suggestions, if there’s a particular way that you want to go, we can do it."

Overjoyed, Holly then said this was the "best thing to ever happen" to her.