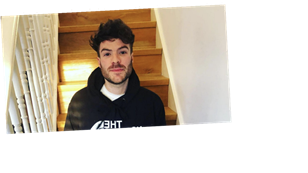 I’m A Celebrity runner-up Jordan North made a blunder recently while hosting a charity fundraiser in his home town.

The Radio 1 star, 30, took to Facebook to raise money for Pendleside Hospice in his home town of Burnley.

And while hosting it, he read out the number people needed to text to buy raffle tickets.

Get exclusive celebrity stories and fabulous photoshoots straight to your inbox with OK!'s daily newsletter. You can sign up at the top of the page

It was 20 minutes in when someone told the star he’d been reading out the incorrect number, but Jordan double checked and he still believed he’d got it right.

However the number was in fact incorrect, and people’s donations ended up going to a greyhound charity instead of the intended Pendleside Hospice.

Talking about his blunder while hosting his radio show, Jordan explained: “This greyhound charity all of a sudden got loads of text donations and the charity that I was trying to raise money for didn’t.”

However, Jordan, who recently revealed he suffered a secret 'meltdown' on I'm A Celeb, made sure the hospice wouldn’t miss out on donations and promised to use his own funds to make up for it.

He carried on telling Radio 1 listeners: “Put it this way, I think I’m personally going to be out of pocket.”

He also took to Twitter and wrote: “Thanks to everyone who took part in tonight’s @PendlesideHosp Quiz.

“Sorry If you donated to the Greyhound charity. I will sort It, promise. (don’t ask, it can only happen to me)."

“No greyhounds were harmed during this process.”

Jordan’s faux-pas comes after the star opened up about his post-I’m A Celebrity popularity.

The 30 year old admitted he’s become so popular post-show that he has had to block fans who send him X-rated snaps on Instagram.

Jordan has 675,000 followers on the social media platform but says he has been inundated with sexy pictures and filthy sex requests.

Talking about the attention he’s receiving, Jordan said on the Help I Sexted My Boss podcast: “Before you go into the castle they brief you and warn you about things, but they never tell you that your DMs get pretty weird!

"Couples as well, random couples asking if I want to join in. There’s one who keeps sending me photos. I’m not looking though, I’ve blocked it."

The radio star continued: “I learned my lesson a couple of Sundays ago. As I was scrolling through, I opened a picture. Never again, I nearly choked on my brew! I was like, 'Is that a mole or a piercing?'"

Jordan placed second behind winner Giovanna Fletcher on the hit show, and beat runners up Vernon Kay and Shane Richie.