The NSW environment department has launched an investigation after the remains of some of the earliest modern humans discovered in Australia were removed from storage on Tuesday, over the objections of traditional owners, and reburied secretly in unknown graves.

The 42,000-year-old Mungo Man and Mungo Lady, along with 106 other skeletal remains, were discovered between 1960 and 1980 by researchers from the Australian National University in a now World Heritage-listed site in the Willandra Lakes Region. 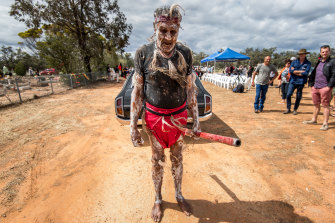 Mutthi Mutthi elder Dave Edwards was present when Mungo Man’s remains, along with more than 100 other ancient ancestors, were taken back to Country in 2017.Credit:Justin McManus

They are central to a controversy between two local Aboriginal groups. One group, the Willandra Lakes Region World Heritage Area Aboriginal Advisory Group, proposed in 2018 that the remains be buried in undisclosed locations around the UNESCO World Heritage Site. Outgoing federal environment minister Sussan Ley approved that plan shortly before the election.

The group’s chair, Patsy Winch, was contacted for comment but said she was unable to make any statements on the matter. 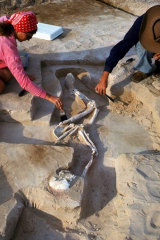 Dr Wilfred Shawcross (right) and the late Anthea Carstairs excavate the remains on Mungo Man in 1974.Credit:University of Melbourne

The second group – the Mutthi Mutthi, Barkindji/Paakantji and Ngiyampaa traditional owners from the Three Tribal Traditional Groups (TTTG) – wants the remains preserved in a “keeping place” where scientists can apply to study them using non-intrusive measures.

The TTTG senior elders and traditional owners recently wrote to Ley and NSW Environment Minister James Griffin seeking a stay on the reburial plan. The group sought assurances that the reburial would “not proceed … for a period of at least 14 days” to enable an emergency declaration under section 9 of the Commonwealth Aboriginal and Torres Strait Islander Heritage Protection Act.

The TTTG group said state and federal governments had assured it the remains would not be reburied until a legal application challenging the plan could be properly assessed.

But on Tuesday the remains were removed from a secure vault in the Mungo National Park Visitor Centre, where they were under the supervision of the NSW National Parks and Wildlife Service. They were buried in secret locations, in what the TTTG group described as “clear defiance” of the attempted stay proceedings.

In a statement late yesterday, the department said: “An investigation is under way into the removal of some remains from where they were being stored.”

The TTTG group expressed shock and dismay that the remains had been returned to unknown graves, calling it a disgraceful act and “another example of cultural mismanagement by government authorities”.

On Tuesday morning the TTTG group received assurance from the NSW Department of Planning and Environment that the reburials had been postponed while its application was being considered by the incoming Commonwealth minister.

But later that day, Mutthi Mutthi member Jason Kelly, a spokesperson for the applicant group, said they had become aware that the remains of Mungo Man and Mungo Lady had been removed from a locked park visitor centre and reburied.

“We want to know how this has happened and who is responsible for this desecration,” Kelly said. “We have long objected to the delay in the reburial of the remains and reminded them of the obligation to seek our consent, but they have ignored us and gone ahead.”

Barkindji/Paakantji man Michael Young, a recognised traditional owner under a 2015 native title decision, said the TTTG group had attempted to apply for an injunction under NSW’s Aboriginal and Torres Strait Islander Protection Act but was told it didn’t need to put the application in. Instead it was instructed by the state’s Office of Environment and Heritage that “nothing was going to proceed”.

The group was repeatedly assured over the course of Tuesday that reburials would not go ahead.

“For me, it’s criminal and they should be held accountable for this destruction,” Young said.

The traditional owners and elders group wants to know where the remains are now buried, so a culturally appropriate public memorial on Country can be provided.

The discovery of the remains of Mungo Lady and Mungo Man rewrote Australian history, giving evidence of continuous Aboriginal existence.

A number of stakeholders question the authority of the Aboriginal advisory group that authorised the reburial. The group’s board was supposed to face elections last year, but the process was postponed due to COVID-19 health restrictions.

A Commonwealth minister for the environment has not been named or sworn in on an interim basis since Labor won the federal election on Saturday, but Prime Minister Anthony Albanese could name his ministry on Thursday.