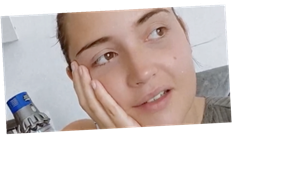 Jacqueline Jossa took to Instagram on Wednesday evening to remind her followers that she needs them to help her on her weight loss journey.

The former EastEnders actress made it clear that when temptation comes knocking she wants her followers to help her stay on track.

Having ordered two boxes of Doughnut Time doughnuts to decorate with the kids, Jacqueline asked her followers whether or not they thought it was okay for her to eat one.

“All of you lot are telling me to just eat the donut,” she revealed after posting a poll to gather some feedback. “I thought I told you guys if I come on here and ask whether I should eat… you’ve got to tell me no not yes! But you’ve all said, “Go on eat it,” she added.

“You’ve all got to be helping me and supporting me on this journey,” pleaded the mother-of-four.

Jacqueline explained that she bought the doughnuts to try and entertain the kids. She and her husband Dan Osbourne are parents to two daughters – Ella, five, and and Mia, two. Dan’s seven-year-old son Teddy – from a previous relationship – was also around to join in the fun.

Jacqueline said that she was craving “something different to do” as “lockdown is so boring.” The queen of the I’m A Celeb jungle bought two boxes “to make sure there was enough to go around.”

“The question is… do I eat one?” she asked her 3.1 million followers. “I’ve been being very good and eating a doughnut would definitely ruin it,” she added.

“I’m trying to make myself feel better about it, but I feel like in my head I’ve already decided that I am going to eat one,” she admitted. “They smell so good!”

Jacqueline made sure her fans knew she wouldn’t be missing out on the fun. “I like decorating them,” she revealed, “But come on. I’m not gonna make it and then not eat it.”

However, in spite of thinking she would cave into temptation, the star stood strong and didn’t end up indulging in the sweet treat. Not only that, she decided to do a workout instead. She updated her followers a few hours later with a puffed out post-workout clip.

“I didn’t have the doughnut and I worked out,” she said breathlessly, fist pumping the air.

Jacqueline has been open with her fans about wanting to lose weight and embarking on her current fitness journey in order to feel healthier, happier and more confident about how she looks.