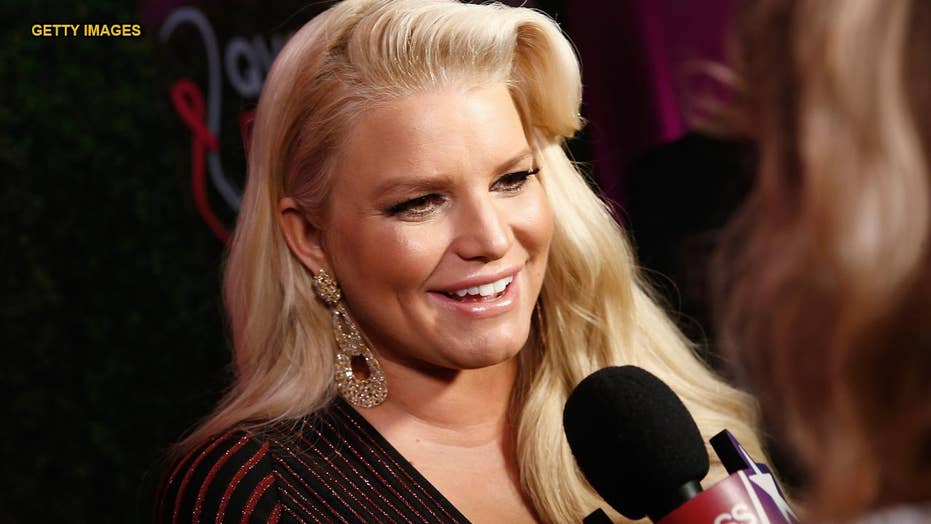 Jessica Simpson and husband Eric Johnson announced on social media Wednesday that the fashion designer has given birth to their new daughter Birdie Mae. The baby, weighing 10 pounds 13 ounces, is the couple’s third child together. Johnson and Simpson are also parents to 6-year-old daughter Maxwell and 5-year-old son Ace. Simpson previously revealed they were expecting again in an Instagram post in September.

It appears singer and actress Jessica Simpson is getting back into her exercise routine nearly two months after giving birth.

Simpson, who gave birth to her and former NFL player Eric Johnson's third child, Birdie Mae, on March 19, took to Instagram on Thursday wearing what appears to be workout pants, sneakers and a black top.

“Just stretching it out in my rubber corset. The joy of postpartum,” Simpson captioned the post.

JESSICA SIMPSON CELEBRATES DAUGHTER MAXWELL’S BIRTHDAY WITH SWEET PHOTO: ‘YOU ARE THE COOLEST PERSON I KNOW’

“Don’t stress, you made a human. Take as much time as you need to achieve the goal YOU set for yourself and no one else,” advised one fan.

“Thank you for being one of the few women who actually share a real story about losing [the] baby weight!” wrote another.

“I truly love your honesty,” commented a fourth.

Though the “rubber corset” wasn’t pictured in the photo, the “Irresistible” singer may have been referring to a postpartum “belly wrap,” a product some new moms wear around their torso for extra support, per Women’s Health.

Simpson also shares daughter Maxwell, 7, and son Ace, 5, with Johnson. Shortly after Birdie’s birth, Simpson — who was open with her fans about the struggles she faced during her third pregnancy — later revealed the baby girl was nearly 11 pounds the day she delivered her.