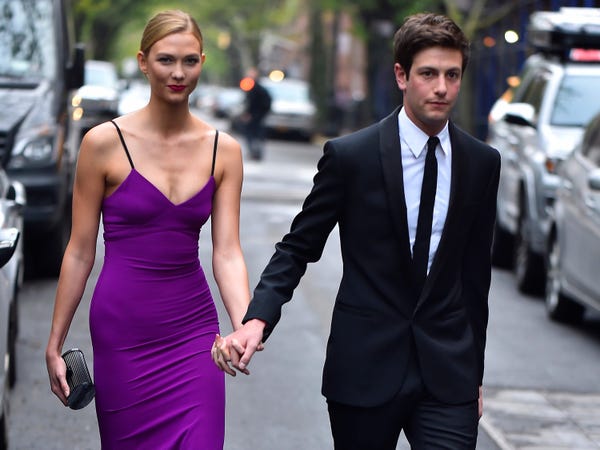 Karlie Kloss is making her political views clear ahead of the 2020 presidential election.

On Tuesday, Kloss shared two photos of herself wearing a face mask with Biden and Harris' campaign logo on the front. She also held her sealed mail-in ballot in both pictures.

"What's your voting plan? This was mine — signed, sealed, (notarized), and delivered," she captioned the photo, adding the hashtags "#voteBLUE" and "#scienceoverfiction."

Kloss married venture capitalist Josh Kushner in 2018 after six years of dating. And though Josh's brother and his sister-in-law Ivanka Trump are deeply engrained in Trump's reelection strategy, both Kloss and Josh are reportedly Democrats.

The supermodel has previously addressed the mixed political views in her family, telling British Vogue that it's been difficult to navigate during a 2019 interview.

"It's been hard," she admitted, continuing, "But I choose to focus on the values that I share with my husband, and those are the same liberal values that I was raised with and that have guided me throughout my life."

In 2016, Kloss openly expressed her support for the then-Democratic presidential nominee Hillary Clinton when she was running against Trump.

"One of the greatest privileges we have as Americans is a voice. I'm proud to say I did my part, now it's your turn," she wrote along with the hashtag "#ImWithHer."

And even though Kloss has proven to be a fervent Democrat, the supermodel has still had awkward interactions about her ties to the Kushner family.

While she serving as a judge on "Project Runway" in January 2020, a contestant named Tyler Neasloney was assigned to make Kloss an outfit she could wear to an event in Paris using only clothes from Goodwill.

The judges weren't impressed with the garment, and Brandon Maxwell told Neasloney that he couldn't see Kloss wearing the outfit "anywhere."

The contestant replied: "Not even to dinner with the Kushners?"

Kloss was visibly shocked and left speechless from the remark, which went viral.

She addressed the tense exchange on "Watch What Happens Live" shortly after the episode of "Project Runway" aired.

"I was honored to be one of the first memes of the decade. But honestly, the real tragedy of this whole thing is that nobody is talking about how terrible that dress was. That's why he went home," she told Andy Cohen.

Kloss added, "And no, I would not wear that dress to any dinner."