Kate Garraway, 52, commanded attention in an mesmerising red gown which billowed out on to the red carpet.

But after arriving inside, things took a turn as Kate revealed the bar was not open for the guests.

The presenter uploaded a selfie to her Instagram where she revealed Damien Lewis was their hero during the fiasco. 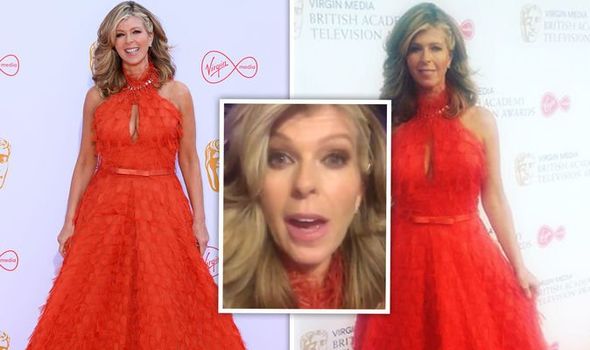 She wrote: “Just got into #baftatv & found the bar closed – thanks @damien_lewis1. Very #bobbyaxelrod . #billions.”

On the night, Kate’s frock highlighted her waist as it came with a thin belt, matching her colour theme.

The star showcased her cleavage in the number, thanks to to the saucy keyhole cut-out.

Kate appeared to have shunned a bra for the evening as her frock’s daring design left little room for the underwear.

She added some more glamour to her look by wearing a dazzling chocker necklace atop the halterneck design.