Ever since the bombshell report that Kim Kardashian West tapped celeb divorce lawyer Laura Wasser, one question has been on all of our lips… will she do it??

We’ve honestly been wondering when the KUWTK star would pull the trigger and divorce hubby Kanye West since all the way back in 2019. For real, we even did a reader poll after learning about their landmark Met Gala fight (in which he got all controlling and sexist about her dress being too sexy) and let us tell ya — y’all are some true believers in the power of love. 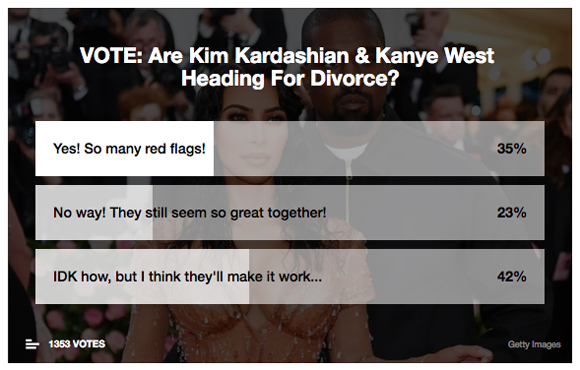 But that was before 2020, easily the worst year of the power couple’s marriage (and y’know, a lot of our lives tbh).

In July Kanye launched his bid for the presidency, putting Kim — who campaigned strongly for Hillary Clinton against Donald Trump back in 2016 — into a position where she couldn’t voice her political opinion without seemingly crossing her husband. It effectively silenced her during one of the most important elections of all time.

And of course he also aired their dirty laundry — revealing on a grand public stage that they had considered aborting daughter North West — causing a huge family row. Yeezy just got more and more erratic and offensive online after that, leaving Kim “at the end of her rope,” per reports. Oh, and he moved to Wyoming.

We mean, the “couple” were no longer even living under the same roof for months. And then of course there’s the hiring of a lawyer, and…

Well, surely the announcement must be on the way, right? It’s the logical next step. Isn’t it? Well, maybe not — if you’re Kim Kardashian, master of PR.

The reality star infamously turned a leaked sex tape into a beauty empire, so no one can tell her what she needs to do to get in front of a story — even one as common as Hollywood divorce. So what’s her plan going forward?

According to a source spilling the strategy to Us Weekly, Kim is going to be doing things a little out of order:

“Kim wants the divorce settlement finalized before formally filing. Settlement talks are ongoing. Kim wants to control the PR campaign of the divorce and she was blindsided by leaks about the divorce reports.”

Whoa! Her plan was to make the announcement not that she was filing for divorce but that the divorce was a done deal?

Pretty smart actually. It saves you a lengthy, dragged out public fight like fellow A-listers Brad Pitt and Angelina Jolie are shockingly still going through.

That also fits with what we’ve heard from so many sources — that Kim knows in her heart for certain now that the marriage is over, and she’s just trying to keep the kids safe.

“She knows what’s best for her and their kids, so if things ended she would want them to end amicably so they can co-parent together as best as possible.”

And what could make things easier than a quick, clean announcement of a conscious uncoupling already finalized — cordial and classy and sanitized for the children’s protection. She really is thinking like a lawyer now.

But of course the leak about the divorce attorney may have messed all that up. Can Kim really keep from commenting until all the legal work is done??

What do YOU think Kim will do next??