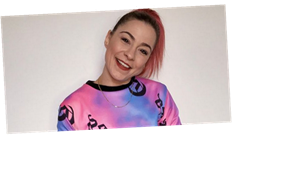 Former X Factor star Lucy Spraggan has opened up about her experience of the hit show back in 2012.

The talented singer songwriter, now 29, finished ninth on the TV talent contest, after having to quit due to illness, while also coping with a family bereavement.

Now, in an exclusive chat with OK! Online, the musician explains that, in her view, the show did little to support contestants mentally.

Get exclusive celebrity stories and fabulous photoshoots straight to your inbox with OK's daily newsletter . You can sign up at the top of the page.

She revealed: "There was absolutely no offer of support for anyone’s mental health, or really their physical health.

"There was absolutely zero consciousness of people’s welfare at the time that I was on the show, but that was nearly 10 years ago.

"They have a lot of questions to answer about duty of care across the board, not just ITV but the people behind it."

The star, who's new album drops later this month, went on to add that while her time on the show publicly appeared to be "largely positive" there were "lots of things that go on that people don’t see".

Lucy admitted what she experienced is the reason she is "writing a book this year".

Although the Tea and Toast singer was successful in getting through to the live shows, she also discussed the auditions of others that may have been perceived as comical, saying: "It was like putting people in the stocks and throwing tomatoes at them.

Are you part of The OK! VIP Club? If not, why not? It’s free and gives you backstage access to stories like this, exclusive home tours, special discounts and so much more!

"When you look back it is so inappropriate its like taking a vulnerable person and making TV out of that is fundamentally wrong."

An X Factor spokesperson told OK! in response: “The duty of care to our contestants is of the utmost importance to us. We take welfare very seriously.”

Nearly nine years on from first appearing in front of Simon Cowell, Lucy is in a very good place and has been "throwing herself into fitness.

She has lost three and a half stone, and has been reaping the benefits of a healthy lifestyle.

The performer told us: "I stopped drinking 18 months ago, just decided I don’t want to drink anymore.

"When I was six months sober I went to vegas with my friends and everyone was getting wasted.

"The next morning after a big night out something just said you need to run, and I’ve never run in my life.

"So last January I went on my first run, then three weeks later I ran a 10k and a few weeks after that I did a half marathon and I have not really stopped running since."

Lucy’s new single Animal is out now on Cooking Vinyl, taken from her forthcoming album ‘Choices’ out on Feb 26th.