Comedian Michael Che posted the joke that someone sent him on Instagram. He wrote that the take on Simone Biles was ‘rough,’ but he still rated it as a nine out of ten.

Saturday Night Live writer and cast-member Michael Che, 38, is no stranger to controversy, but he may have gone a little too far when he shared a joke DM-ed to him about Olympian Simone Biles, 24, and former doctor and convicted sex offender Larry Nassar, 57, on Thursday July 29. The comic took to his Instagram Stories and shared jokes that fans sent him about Simone and her decision to withdraw from Olympic competitions to focus on her mental health.

The “Weekend Update” comedian revealed that he wanted to “make fun of Simone Biles” in an Instagram Story. He also said he planned to work out some of the material at New York comedy institution, the Comedy Cellar. “I got like 3 [minutes] of Simone Biles jokes in my head. I’m going to the Cellar tonight to say them into a microphone,” he wrote. “As the dorky kids say, I’m choosing violence.”

While Michael didn’t reveal what jokes he had about Simone in mind, some fans saw the announcement as an opportunity to send some of their own. Michael provided feedback on the jokes that he received, and one person messaged the comedian a bit about the disgraced Team USA gymnastics doctor. “Larry Nassar understands Simone Biles better than anyone. He too had to quit doing what he loved at the pinnacle of his career, because of mounting pressure,” the fan wrote. The SNL star said that the joke was “absolutely tasteless” but rated it as a nine out of ten. Another fan wrote that saying “Who said black don’t crack,” would be a bit to try. Michael wrote that it was “a good joke” and gave it an eight out of ten. 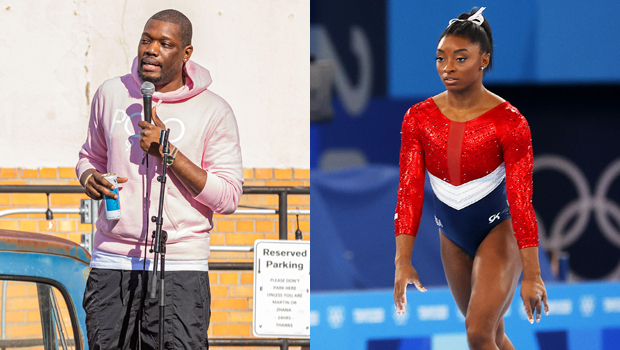 Shortly after posting the since-deleted Stories, Michael faced backlash for sharing the jokes. One person called the comedian “trash,” and another person wrote that he must have mis-judged his audience. “It seems he had no idea how beloved Simone Biles is, or just how messed up it is to share a Larry Nasser joke,” one person wrote on Twitter.

In another since-deleted post, the That Damn Michael Che star claimed he was “hacked,” but it wouldn’t be surprising if that was also a joke. “Can’t believe they got me,” he wrote, according to Newsweek. “Y’all know I only do jokes about whites and cops. S’all good now I changed my password and everything.” He’s since scrubbed his Instagram, and his only Story is a photo of a piece of cheesecake and a drink.

Even though some fans were obviously upset about the comedian’s jokes, Michael has never been shy about leaning into controversy and joking about sensitive topics. The “Weekend Update” anchor has dissed Kanye West and Donald Trump, while on SNL. He’s also taken jabs at rapper Lil Wayne over his support for Trump during the 2020 election.