Miley Cyrus is keeping it real in 2021! The singer revealed she wore an orange two-piece, with her name bedazzled on her backside, on New Year’s Eve.

Miley Cyrus, 28, has kicked off the new year in an orange, disco era-inspired outfit! The former Disney Channel star rang in 2021 on Dick Clark’s New Years Rockin’ Eve, hosted by Ryan Seacrest, with a performance of her 2009 smash “Party in the U.S.A.” and continued celebrating through January 1. She took to Instagram on New Year’s Day to share some clips of herself rocking a bedazzled two-piece ‘fit, which even featured her name spelled out in rhinestones on her backside. “NEW YEAR. SAME ME,” she wrote, while facing away from the camera and slapping her backside.

Her cropped long-sleeve top featured a square neckline and fur-trimmed sleeves, which she paired with matching, flared pants. The singer also rocked a black belt and styled her bleach blonde hair in a messy, mullet style. Miley also rocked a dark, cat eye makeup look as she dropped to her knees in the Instagram Stories.

Of course, it came one day after she belted out her smash hit “Party In The USA” on New Year’s Eve amid strict COVID-19 protocols. In true Miley fashion, she donned skin-tight leather pants with red and white stripes on one leg, and blue and white stars on the other, which she paired with a leather motorcycle jacket. So patriotic! 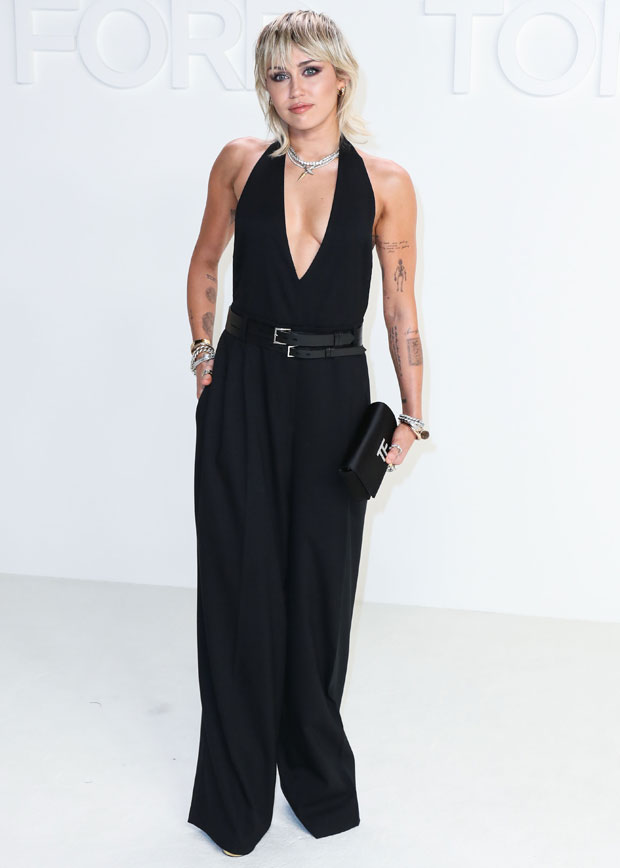 Earlier in the week, she made headlines after picking Harry Styles over Justin Bieber during a game of Would You Rather with Heart FM. “Justin Bieber I’ve known for way too long, it’s like family. Harry Styles, he’s looking really good,” she said, when asked who she’d rather kiss. Miley also revealed that she’s “into” the legwear Harry often rocks and can understand his “taste” in fashion. “We have very similar taste. Sharing a closet, sharing a life together, it just makes sense,” she continued. Talk about a power duo!