When it comes to charitable causes, they don't get much worthier than raising money to fund medical equipment and research to help sick kids.

And when you manage to gather 500 of the wealthiest citizens of this city in one room for an evening, it would seem a fair bet that the prospects of raising LOTS of dough are pretty good. 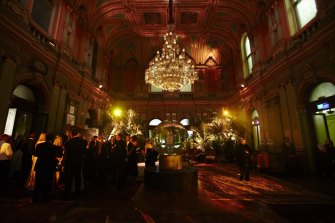 Pampering the pampered: The Gold Dinner 2015.

Indeed, it's the promise of raising all that money which means people like me – dreaded journalists – can poke a little fun at the posturing and social prancing that inevitably accompanies an event like last Thursday's annual Gold Dinner.

But not this year. I was blackballed, lest a silvertail garner some unwanted publicity. 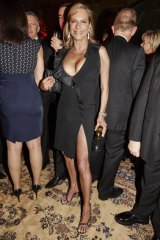 Gold Dinner pioneer Skye Leckie in 2015 was never too proud to rattle her charity tin for a worthy cause.

I cheered heartily the year Gold Dinner pioneer Skye Leckie and her organising committee managed to extract $3.5million from the room. That was the year before the GFC hit, in 2007. Sydney has only become a wealthier city since.

On Thursday night I am told they raised a respectable $3 million, more than last year's $1.6 million but still well down on pre-GFC levels.

But before we send out the cheer squad, let's be real – that's chump change when the room is collectively worth around $25 billion.

Indeed $3 million would barely make a dent in the renovation bill for the magnificent Fairwater estate which tech billionaire Mike Cannon-Brookes (worth $9.63 billion according to Friday's Rich List) and his wife Annie recently paid $100 million for.

The couple generously donated $100,000 on Thursday night, one of the biggest single donations at the event. They are no doubt asked to, and do, donate to many very worthy causes.

Gold Dinner committee chairwoman Monica Saunders Weinberg (who with her sister Betty Klimenko is heiress to a $2.37 billion fortune) said she was putting her money "where my mouth is" and also dropped $100k. 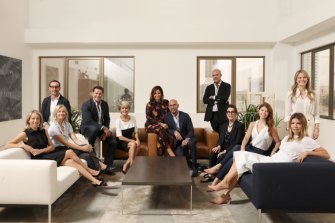 But why shroud such an elite club of privilege in secrecy by banning journalists? What is there to hide?

The Gold Dinner was an opportunity to show the rest of us how those with the means can make a difference to our wider community, rather than just dropping $400,000 on a Lamborghini only to then complain about paying too much tax.

Illness does not discriminate between a wealthy child or a poor one, but money can play a huge role in any child's treatment and prognosis.

Over the years I have heard very wealthy people groan about having to attend "yet another" Gold Dinner, saying they would rather just donate than show up.

However, as the likes of Leckie have long implored them, it's important to be seen to be doing something, to lead by example, to capitalise on their position at the top of the social pecking order.

And that is precisely where people like me come in, to write about it, to name names. The power of the pen to prise a few extra dollars out of fat wallets can be very potent.

Perhaps the Gold Dinner committee should capitalise on the social fatigue of the wealthy and sell tickets not to go?

The rich could then redirect their cash to purely giving to the cause rather than spending $1500 on a ticket, $10,000 on a new evening gown and another couple of grand on shoes and bling to sparkle on the night.

Last year I spotted – and wrote about – a table of very wealthy young women uploading photos of their designer handbags to Instagram just as an oncologist had been discussing the trauma a family goes through when a child is diagnosed with cancer.

Hopefully such vapidity is not what the Gold Dinner is now about, because if it is I'm happy to give it a miss.