During a Q and A session on her social media platform, the ‘Super Bass’ hitmaker reveals that she ‘pulled out’ from the annual event and promises to her fans that one day she will explain why.

AceShowbiz –Nicki Minaj will not be performing at the 2021 MTV Video Music Awards. Confirming the news was the “Super Bass” hitmaker herself in a Twitter post, saying that she has “pulled out” from the event.

On Thursday, September 9, the 38-year-old turned to her account to open a Q&A session using hashtag #BarBIA, referring to her and BIA collaboration on their song “Whole Lotta Money (Remix)”, which was nominated for the Song of the Year at the 2021 BET Hip Hop Awards. After one Twitter user asked her, “Are you performing at the VMAs ??????” she directly responded that she’d had to remove herself from a planned appearance.

“I just pulled out. I’ll explain why another day,” Nicki replied. The “Starships” rapstress then expressed her appreciation for those in charge of the show, including producer Bruce Gilmer, “But I love those guys at MTV. Thank you Bruce. I love you so much.” She concluded her statement, “Next year we there baby.” 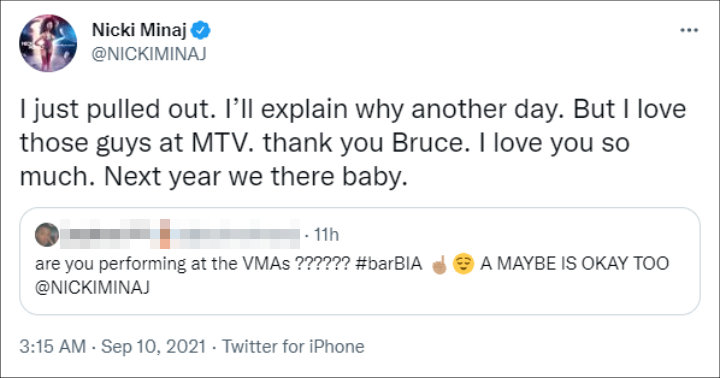 Nicki Minaj confirmed that she ‘pulled out’ herself from 2021 MTV VMAs.

In August, it was reported that former Little Mix star Jesy Nelson was set to perform alongside Nicki in an electric display. A source told The Sun at the time, “The MTV VMAs is one of the biggest nights in music, watched by millions around the world, so everyone is working hard to get Jesy a performance slot. Nothing has been locked in yet but talks are happening right now and if her team pulls it off, it will be huge.”

“If [Jesy] pulled off a killer performance, it would show that she is here to take the pop world by storm,” the music insider continued. “Her label thinks the single will appeal to people in the US as it samples “Bad Boy For Life” by P. Diddy and features Nicki, so putting her in front of those audiences will give her career there a huge boost.”

Nicki wasn’t the first musician to have pulled out of this year’s event. On September 9, Lorde confirmed she would not be appearing as planned at the ceremony due to COVID-19 concerns.

“I saw some people were very concerned about me pulling out of the VMAs, you’re so sweet, I’m totally fine!” the singer/songwriter assured her fans that there’s nothing wrong with her cancellation. She added, “It’s just that we were planning this insanely amazing, many-bodied intimate dance performance, not fully understanding the (very necessary!) safety protocols that are in place.”

Lorde continued to say that “the masking and distancing just meant it wasn’t gonna be what [she] dreamed.” The “Royals” singer then concluded, “You know I can’t make something less than outstanding for you guys. I hope you understand. There will be many more TV performances, don’t you worry.”