In the midst of a hotly contested presidential election, in which analysts are paid six-figure sums to predict the outcome of crucial swing states, one demographic has been sorely overlooked: submissives. Dommes are going to great lengths to encourage their subs to register to vote, offering discounts to their OnlyFans or on personalized Snapchat content in exchange for proof of having voted. Some financial dommes — or findommes, a fetish in which the sub derives pleasure from ceding control of their finances — are also trying to control their subs’ votes by hitting them where it hurts most: their wallets. “Vote Biden! If you’re a Trump supporter you owe me money, I don’t make the rules,” reads one representative tweet.

Goddess Gia, a foot and financial dominatrix, put out a call on Twitter for free content for a week in exchange for proof that her subs had voted for Biden. All in all, she says, 12 of her subs had either sent her a picture of their ballot or of their party registration (it’s worth noting that some states, such as Illinois, New York, and Florida, have made ballot selfies illegal). “Receiving things from me for free that you would usually have to pay for attracted many finsubs to my DMs,” she says. “So it was not at all hard to find ones who would send proof of their vote for him or have them go out and vote for Biden the very next day or later that week.” 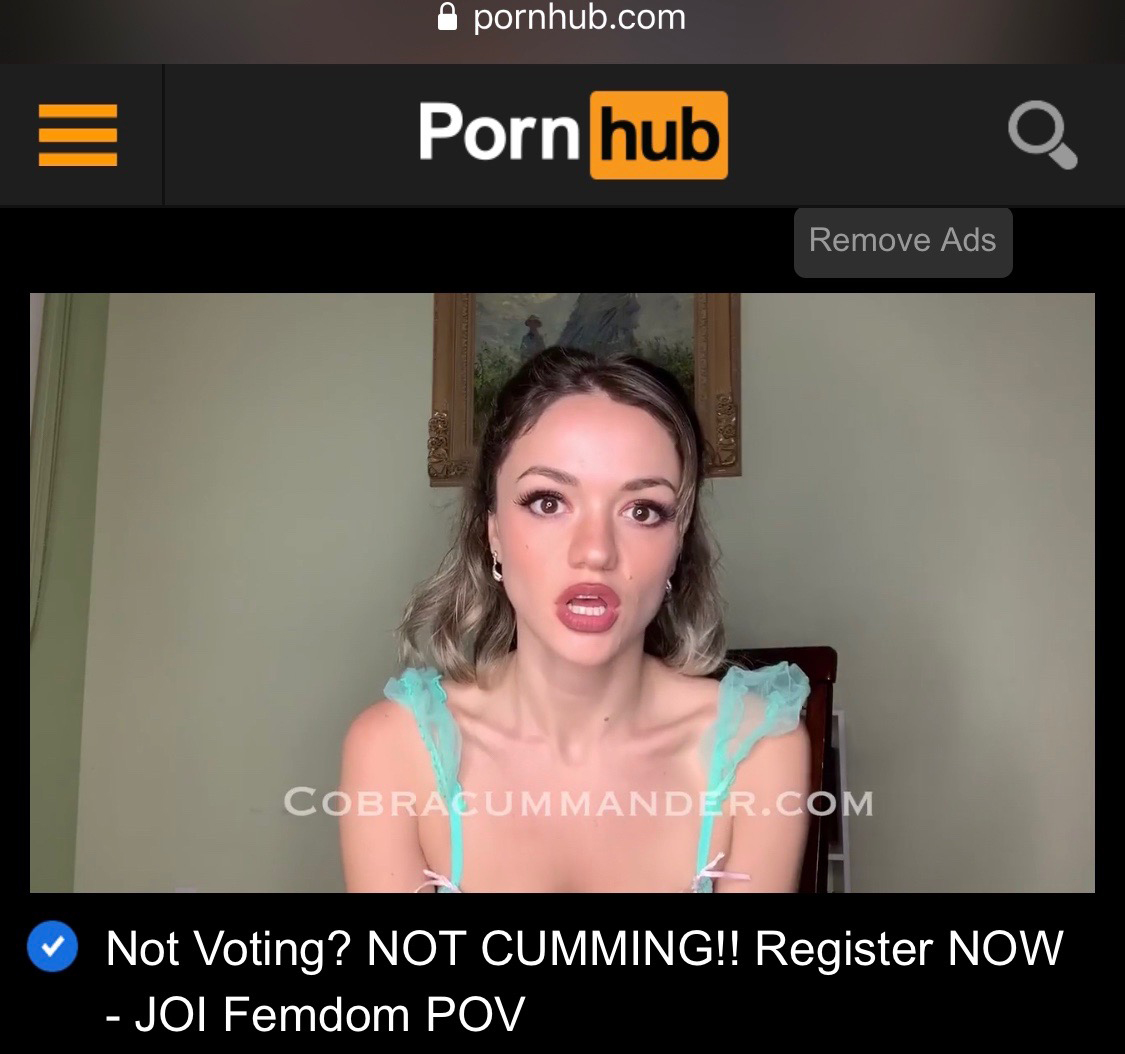 Sex workers harnessing their often-substantial influence to get out the vote is not new. In 2016, about 500 legal brothel workers in Nevada spearheaded a Hookers for Hillary campaign, an initiative that many dismissed as a publicity stunt but that ended up giving “a platform to people not usually seen as political heavyweights: working-class women in their 20s and 30s who talk about how they struggled to pay for health care and feeding their kids,” as Vox’s Libby Nelson wrote at the time. In the leadup to the 2020 election, sex workers have assumed an increasingly more public role in political discourse. “Sex workers have already been working to get out the vote not just this cycle, but every cycle. Yet their work and contributions have been marginalized — treated as a curiosity at best,” Ysaid Ferreiras, the CEO of Bigtent Creative, tells Rolling Stone. The marketing firm recently rolled out I Only Date Voters, a sex worker-led voter registration campaign on Instagram and OnlyFans. “This collaboration is a way to embolden and legitimize their contributions to the political discourse.”

Calling subs to action is one way for sex workers, a typically disenfranchised group, to reclaim and harness their power. “I think a lot of sex workers are constantly fighting for rights. I describe it as, we’re polar bears on ice and the ice is shrinking. We really don’t have many places to go to voice our opinions,” says Cobra, pointing out that Instagram deleted a SFW screengrab of the voter registration JOI video she posted on Pornhub. “Things like that make it very difficult for us to organize, and that’s why we’re constantly evolving and being creative and resourceful in new ways.”

So far, about 20 sex workers have signed up for the Bigtent campaign, many of whom have far-reaching and diverse audiences. Jet Setting Jasmine, a psychotherapist and master fetish trainer with more than 72,000 followers on Instagram, notes that many of her followers are black or brown women between the ages of 25 and 45, a demographic that has historically felt removed from the voting process. “It’s so important these folks are engaged,” she says. About half of the creators working with the campaign are dommes, a conscious decision on the organizers’ part: unlike other types of influencers, dommes are in a position for subs to do exactly what they want them to do and they’ll listen, or else risk incurring their wrath.

“I think I may be able to sway them because I’m a goddess and they’ll listen to whatever I say,” says Mistress Orion, a pro domme who has posted two voter registration PSAs on TikTok; she is also running a campaign on OnlyFans asking her subs to remind three people to vote before the election. As an example of the sway she holds over her subs, she cited an instance where one of her subs offered to drink toilet water for her; when she told him to boil it first and make a pot of tea to ensure it was hygienic, he said he didn’t like tea, and would drink it straight out of the toilet. “I feel like if you’re willing to drink toilet water or do some of the things they want to do for me, it’s fair [to ask them to vote],” she says.

Bigtent is a nonpartisan organization, and the creators associated with the campaign do not advocate for any specific candidate (indeed, the marketing firm earlier this month was the subject of a BBC investigation that found that it was working with some TikTok creators who had not appropriately marked their content as paid ads). But many dommes not associated with the campaign have taken the opportunity to encourage their subs to vote for Biden specifically.

“For me, as a black woman, I would like to see a change in office and I want my slaves to be assisting in that change,” says King Kourt, a findomme based in Ohio who recently tweeted a call for her subs to vote for Biden. “I thought to myself, having the power I do have over different submissives, I thought it would be best to use that power to affect change.”

Not all dommes feel comfortable encouraging subs to vote for a specific candidate. “Those are just waters I don’t need to tread in,” says Cobra, who does not specify in her video for which candidate orgasm-deprived subs should cast their vote. “I put my opinions on social media, but for something like that I just wanted to keep it general and make sure people are doing it for the greater good.” She also expressed concerns about the legality of exchanging goods for Biden votes, an issue that was raised last month when influencer Tana Mongeau tweeted that she would send free nudes on OnlyFans to anyone who voted for Biden. Some pointed out that this could be perceived as vote-buying, a potential form of U.S. electoral fraud punishable by a fine or up to five years years in prison. (Mongeau later backtracked and said she was being sarcastic.)

But given the high stakes of this election (including ,but not limited to, the potential collapse of our democracy), other dommes think community organizers in swing states could learn a thing or two from their persuasive tactics. Kourt, for instance, says that one of her subs voted for Trump in the last election, and that her call for subs to vote for Biden was in part inspired by him. Had he refused, she said, she probably would’ve severed the relationship, regardless of money: “I would need to rethink the relationship between me and the sub because I really don’t stand for the things Trump stands for,” she says. “No amount of money can change the fact that I’m a black woman, first and foremost, all day and every day.”

So she told her sub he simply wouldn’t be voting for Trump this year. “He said, ‘Yes, goddess,’” she says. “It really was that easy.”