Olivia Jade Giannulli has the support of her boyfriend, Jackson Guthy, after breaking her silence on her college admissions scandal on Tuesday’s episode of Red Table Talk.

Olivia Jade and 24-year-old Guthy, a model and musician, started dating in early 2019 but broke up last August. They got back together two months later. On Tuesday, he shared a clip of Olivia Jade on Red Table Talk on his Instagram Story writing, “Very proud of you!” along with three heart emojis. 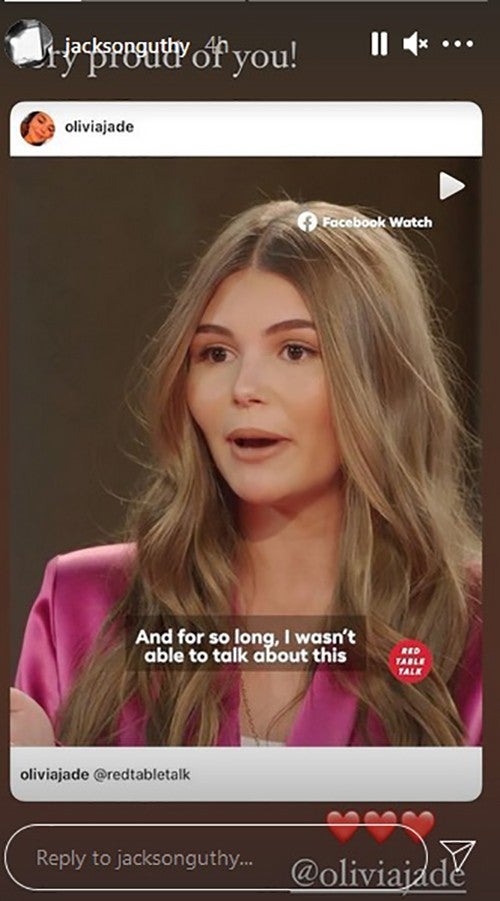 The 21-year-old daughter of Lori Loughlin and Mossimo Giannulli made an appearance on Jada Pinkett Smith’s Facebook Watch show, and apologized for not recognizing her privilege. Both of her parents are currently serving their prison sentences after pleading guilty in May to one count of conspiracy to commit wire and mail fraud and honest services wire and mail fraud.

Giannulli and Loughlin paid $500,000 in bribes to get both Olivia Jade and their eldest daughter, 22-year-old Bella, admitted to the University of Southern California as recruits for the crew team, though neither of them had ever participated in the sport. They initially pleaded not guilty to all charges leveled against them, claiming their payments were donations to the school and not bribes.

On Tuesday’s Red Table Talk, Olivia Jade made no excuses for the college admissions scandal.

“I think that what hasn’t been super public is that there is no justifying or excusing what happened,” she said bluntly. “Because what happened was wrong and I think every single person in my family can be like, ‘That was messed up, that was a big mistake.’ But I think what is so important to me is to learn from the mistake, not to now be shamed and punished and never given a second chance, because I am 21. I feel like I deserve a second chance to redeem myself, to show I have grown.”

“That’s why it’s hard because I’m not trying to come off like … I am not trying to victimize myself,” she continued. “I don’t want pity, I don’t deserve pity. We messed up. I just want a second chance to be like, I recognize I messed up and for so long I wasn’t able to talk about this because of the legalities behind it. I never got to say I am really sorry that this happened or I really own that this was a big mess up on everybody’s part. But I think everybody feels that way in my family right now.”

Watch the video below for more: