Charlie Watts is being remembered by some of the most well-known musicians in the world following his tragic death.  The Rolling Stones drummer passed away at age 80 on Tuesday, Aug. 24, a spokesperson announced on the band’s official Twitter account, and tributes immediately came pouring in from countless celebrities. Paul McCartney honored Charlie with a minute-long video he shared to Twitter. “He was a lovely guy,” Paul said. “Lots of love to his family, his wife and kids and his extended family. Charlie was a rock and a fantastic drummer. Love you Charlie, I’ve always loved you. Beautiful man.”

Paul’s fellow The Beatles alum Ringo Starr also honored Charlie with a heartfelt message of his own. “#God bless Charlie Watts we’re going to miss you man peace and love to the family,” Ringo wrote alongside a throwback photo of the two musicians. The next tribute to Charlie came from the one and only Elton John, who similarly shared a throwback pic and sweet message. “A very sad day. Charlie Watts was the ultimate drummer,” Elton said on Twitter. “The most stylish of men, and such brilliant company. My deepest condolences to Shirley, Seraphina and Charlotte. And of course, The Rolling Stones.”

John Mayer was also among the group to honor Charlie on social media. The “No Such Thing” crooner shared a more recent photo of Charlie to Instagram alongside the caption, “Economy of motion, epitome of cool. Rest In Peace, Charlie Watts.” Another star to share kind words about Charlie was Questlove, who called the late musician “the heartbeat of Rock & Roll” in his Instagram tribute. The official Twitter account for Jimi Hendrix also honored Charlie, as did Def Leppard, who called Charlie’s death “devastating news” and referred to the late star as “a total gentleman.”

Another tribute to Charlie came from Sheryl Crow. She wrote on Twitter, “A hero is gone. No words. A huge gaping hole in the universe.” Tom Morello also honored Charlie and emphasized the impact he had on music. “Rock n roll would not be rock n roll without the rhythm, the style, the VIBE of this incredible musician. Rest In Peace #CharlieWatts, one of the greatest and most important architects of the music we love,” said Tom. Lenny Kravitz said on Twitter that Charlie was, “The beat of The Stones,” adding, “There are no words, every groove has spoken for itself.” 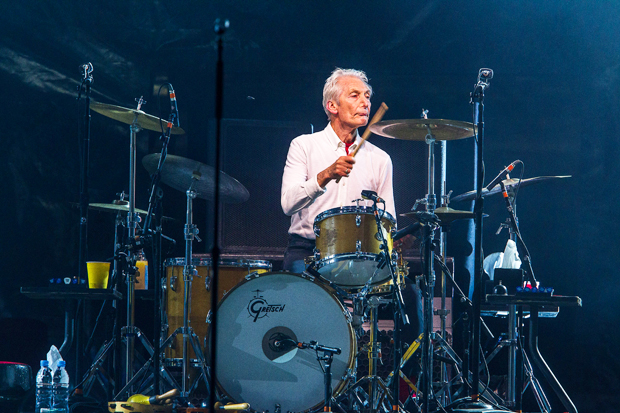 A publicist confirmed that Charlie had died at 80 on Tuesday, according to Variety. The news of passing comes almost three weeks after Charlie and the band announced that he’d be sitting out of the band’s upcoming “No Filter” tour, set to hit the U.S. this fall. In an August 5 statement, Charlie announced that he’d recently undergone a surgical procedure and doctors advised he sit out the upcoming tour. He also revealed that Steve Jordan, 64, would fill in for him.

“For once my timing has been a little off. I am working hard to get fully fit, but I have today accepted on the advice of the experts that this will take a while,” Charlie said in the statement. “After all the fans’ suffering caused by COVID, I really  do not want the many fans who have been holding tickets for this tour to be disappointed by another postponement or cancellation.”