Piers Morgan: GMB host hits out at ‘arrogant’ Boris Johnson ‘He couldn’t even be bothered’

Good Morning Britain broadcaster Piers Morgan, 55, has taken to Twitter to express his thoughts over Prime Minister Boris Johnson, 56, after the latter spoke to BBC Yorkshire about the current coronavirus restrictions in place for the county. The ITV host branded Mr Johnson as “so arrogant” after watching his “train-wreck interview”.

It comes after BBC Yorkshire shared their interview with Mr Johnson as they wrote: “Prime Minister Boris Johnson invited Look North to Downing Street to talk about hospital funding.

“We also wanted to ask him about coronavirus and the restrictions in Yorkshire.”

In view of his 7.6 million Twitter followers, Piers penned: “Another train-wreck interview from the Prime Minister’s regional media tour yesterday.

“He couldn’t even be bothered to prep a few basic local facts before a region-specific interview. So arrogant.” 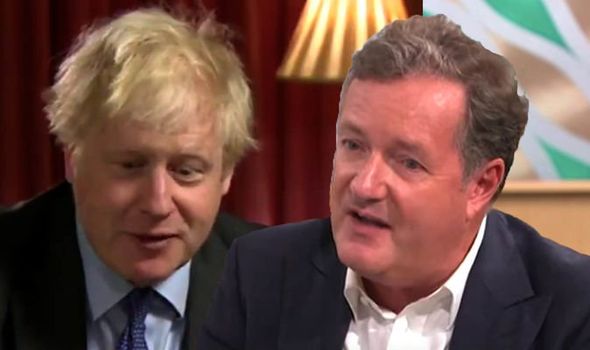 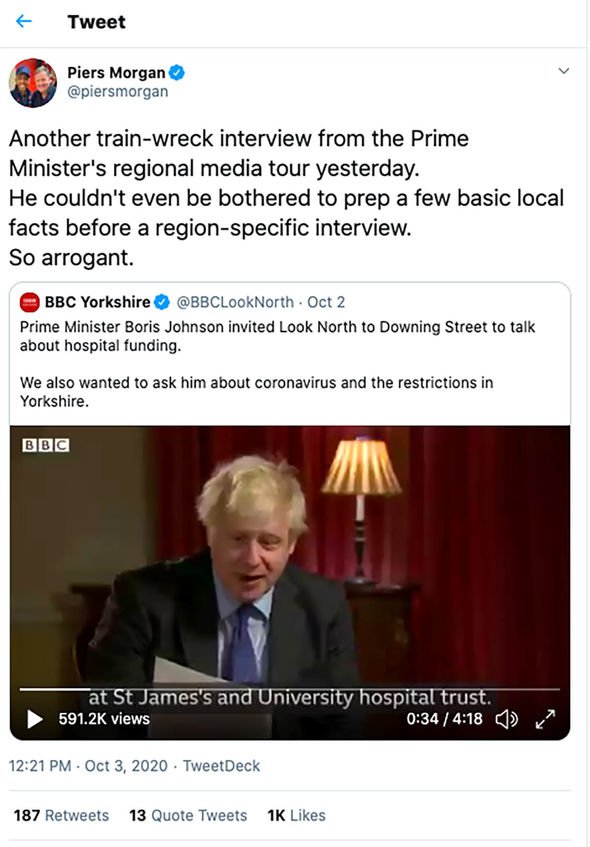 The video shows the reporter asking Mr Johnson about how much funding Leeds will receive, to which he adds: “Leeds, I can tell you, Leeds,” as he goes to pick up some notes on the floor.

It wasn’t long before many waded in to express their concerns after watching the interview themselves.

One replied: “Not just arrogant, contemptuous, dismissive, repellent and entitled.

“His steady rise to the most powerful office in the land is proof positive that if you have enough money you can get anywhere. And it f****g stinks.” 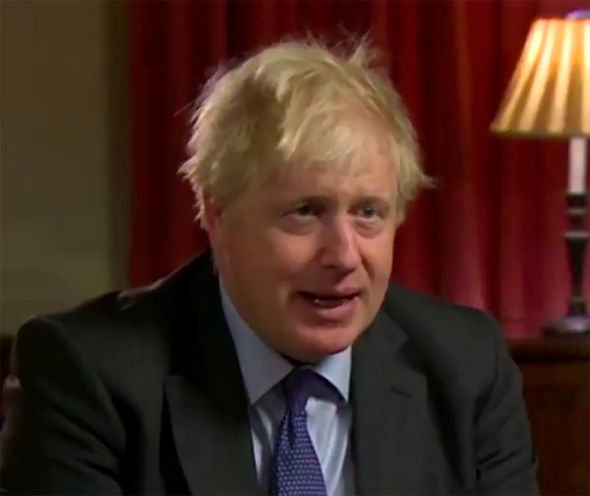 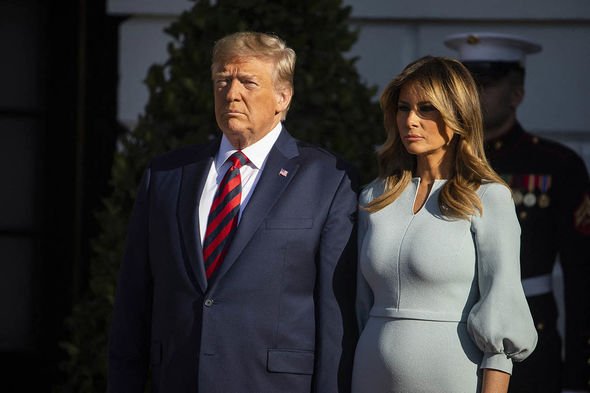 Another concerned social media user added: “And why is he allowing residents in lockdown regions if England to travel outside if their county? What’s the logic??”

A third fumed: “He’s no different from how he’s been his whole political career but ‘YOU’ and many others voted for him because ‘I could see myself having a beer with him.’ He’s the class clown that ppl love but some are smart enough to not vote for him to run the country.”

It comes after tighter restrictions were put in place in parts of northern England after a spike in coronavirus cases.

People are now banned from meeting people indoors from other households in the Liverpool City Region, Hartlepool, Middlesbrough and Warrington.

Health Secretary Matt Hancock added it was “necessary” for the new restrictions.

Meanwhile, Piers spoke out after Dominic West told Kate Garraway he “jumped with joy” when he heard Donald Trump tested positive for coronavirus.

The ITV host shared the headline of an article that read: “GMB viewers slam Dominic West for telling Kate Garraway he ‘jumped for joy’ over Trump’s Covid diagnosis.”

Piers added in a tweet: “Imagine telling someone whose own husband is lying in a coma from coronavirus that you ‘jumped for joy’ when you heard others had caught the disease?”

Kate’s husband Derek Draper has been in intensive care and remains in hospital since contracting coronavirus in March.

Soon afterwards, followers waded in to comment, as one added: “Unbelievable how heartless and cruel some people can be. Totally devoid of any compassion.”

On Good Morning Britain this week, Kate asked Dominic if he had an “instinctive reaction” to the news of President Trump and his wife Melanie Trump testing positive for COVID-19.

He told Kate he did a “lightly leap in the air with joy,” before adding: “He’s said, ‘It is what it is’, but I think it’s what goes around, comes around. I just hope it doesn’t affect him being voted out of office. That’s all.”