Meghan Markle thanks aide for help with floral tributes

Piers Morgan, 57, has been known for his vicious digs directed at Meghan Markle, 41, and this week has been no different since Queen Elizabeth II died. As Meghan joins her husband as they grieve the loss of his grandmother, Piers’ son Spencer Morgan took to Twitter to hit out at the Duchess of Sussex with the Good Morning Britain presenter agreeing with his point.

Spencer spoke out on what he calls Meghan supporters’ “convenient” argument in a fresh jibe at the Duchess and her loyal fans.

He wrote: “The Meghan criticism is a ‘racist’ narrative… always seems to overlook the first couple years where she was loved by everyone. Convenient!”

Piers simply replied in view of his 7.9 million followers with an arrow emoji pointing to his son’s message, showing his wholehearted agreement.

However, it wasn’t long before social media users rushed to the comments to hit out at the Morgans for their “obsession” with the Duchess. 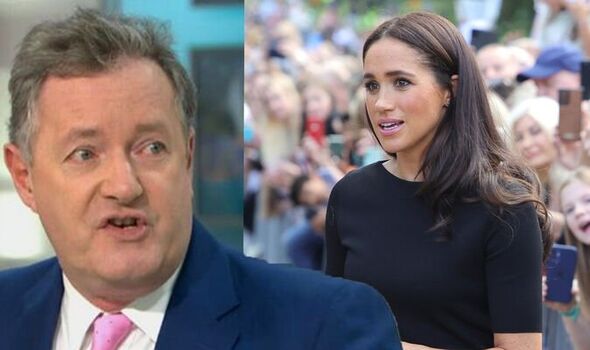 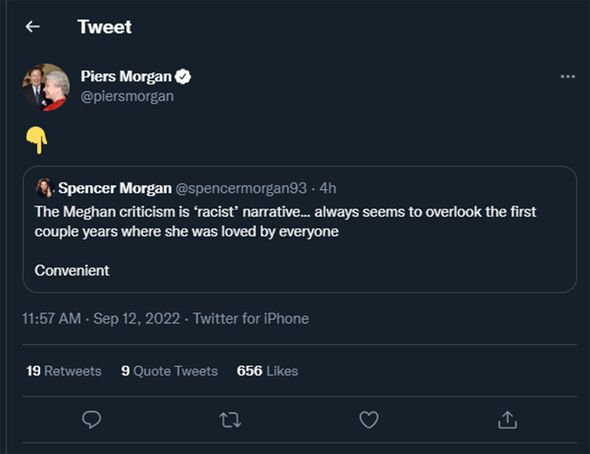 Yampy2022 added: “The criticism has been fuelled by the tabloid press, with your father [Piers] as the deeply unpleasant ringleader.

“All this because Harry and Meghan dared to challenge the tabloids’ untruths in the courts and won. Ever since, there has been an avalanche of hatred poured on them by the papers they sued.”

MooreLegend commented: “Not unusual to be loved by everyone but when you finally start to speak the truth and people start becoming uncomfortable they make it about them. Good on you Meghan, don’t let nobody trample your dignity.” 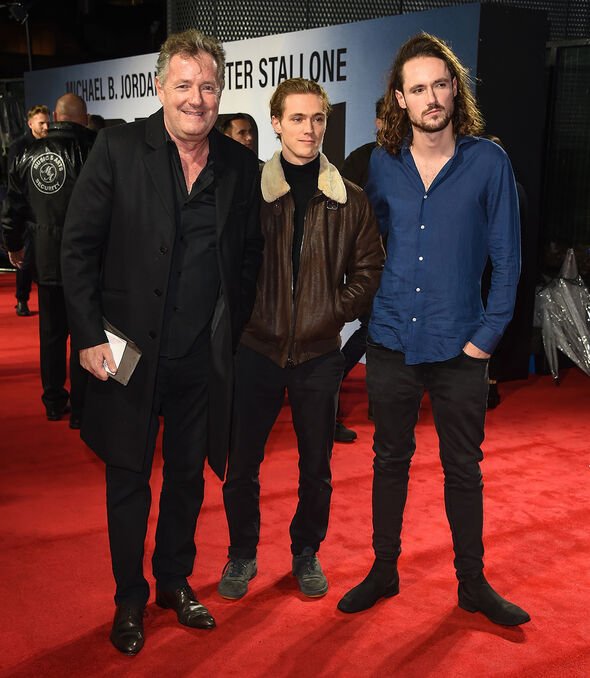 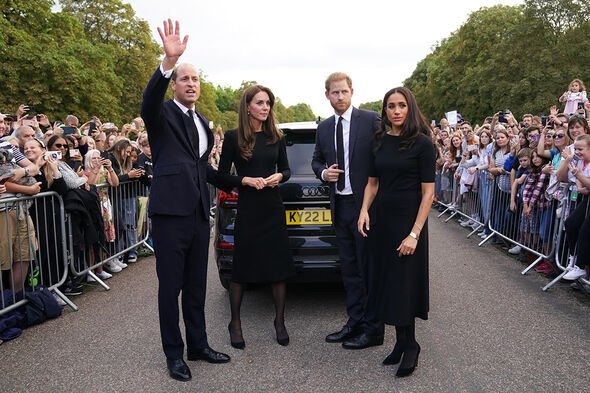 However, many took to the comments to agree with Piers and his son’s views on the “convenient” narrative.

Chrisiep1310 said: “I was super happy with their news of marriage. But over time Meghan became more a Kim Kardashian than Royal … and there was something about her that changed.”

Nicola3595815 said: “You can fall out of love especially when she starts to act in the way she did.”

This comes after the TalkTV host delivered a dig at “Princess Pinocchio” over the news that her children had gained royal titles following the death of Queen Elizabeth II.

After the Queen’s death, it was declared that Archie and Lilibet, Harry and Meghan’s children, will now become His and Her Royal Highnesses.

The broadcaster spoke out to remind the world that she had claimed in her interview with Oprah Winfrey that her children had been barred from receiving royal titles, although his frank commentary was blasted by some as crass and insensitive.

He wrote on Twitter: “REMINDER: Princess Pinocchio told the world on Oprah that her son was barred from being a Prince because of his skin colour.”

Social media user Dave43law replied: “Reminder – her husband has just lost his grandmother – today is a day to shove the one dimensional view you hold somewhere the sun doesn’t shine!”

Archie and Lilibet were not immediately entitled to royal titles, due to their relatively distant status as the Queen’s great grandchildren.

However, King Charles III has been crowned following her death, and Meghan’s children will both now be granted “Royal Highness” titles and become Prince and Princess.

This is due to rules set out by George V in 1917, declaring that the grandchildren of an existing monarch have the right to titles.