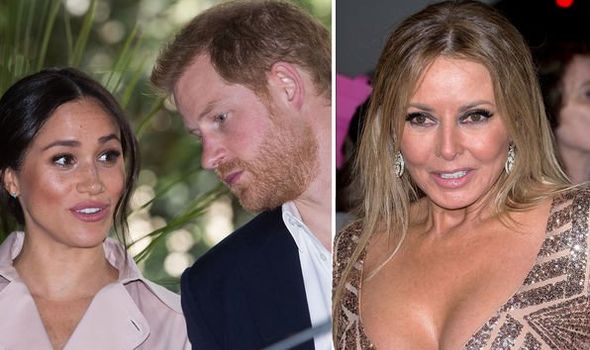 Prince Harry and Meghan Markle are the cover stars of Time magazine’s latest edition. The publication named the couple as two of the world’s 100 most influential people. On the pair’s first magazine cover shoot together, 40-year-old Meghan is seen posing in a white jumpsuit with her hands placed in front of her.

By her side is husband Prince Harry, 37, with his hand placed on her shoulder.

The couple’s latest shoot has been a talking point on social media, with many sharing their thoughts.

One viral meme likened the couple’s positioning to a hairdresser and their client.

It reads: “This looks like Harry is her hairdresser and he’s looking into the mirror explaining what he did to her layers.”

Carol Vorderman is one of the many social media users to share her thoughts.

The 60-year-old posted the picture and meme on her Instagram Story, in view of her 156,000 followers.

She wrote: “And where’s our Harry got all that boufff from anyway?,”(sic) alongside a winking face emoji.

A second picture of the couple shows them in colour coordinated attire stood beside each other.

The mother-of-two is seen sporting a rollneck top and smart trousers, while Harry wore a smart suit.

In another snap they’re seen smiling at each other while holding hands.

“They don’t just opine. They run toward the struggle.”

The couple are currently based in Los Angeles after stepping down from their senior royal duties last year.

They have since worked on their own projects together and individually.

As well as this, they recently became parents to new baby daughter Lilibet.

Back in 2019, they welcomed their first child together, son Archie.

It’s not the first time Carol has shared her thoughts about royals.

In April, she paid tribute to Prince Philip who died aged 99.

On Twitter, Carol wrote: “I went for a private lunch with The Queen at Buckingham Palace quite a few years ago.

“They were both in their 80s and Prince Philip and she were flirting with each other madly and laughing. Theirs was a love and a marriage of more than 73 years. Deepest condolences Ma’am.”