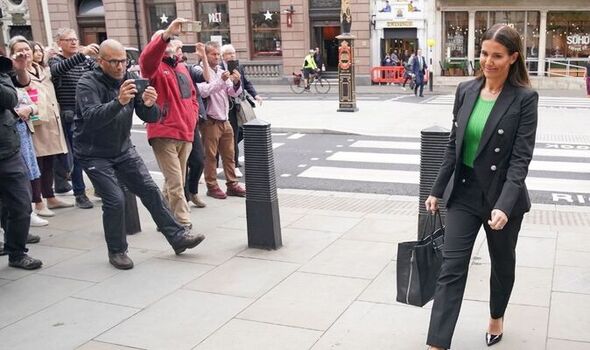 Rebekah walked out of court today after Coleen’s barrister David Sherbourne made the claim in the final hours of the Wagatha Christie trial at London’s High Court. Coleen accused Rebekah, who is married to Leicester City player Jamie, of leaking information from her private Instagram story in October 2019.

Rebekah denies this and is suing Coleen for libel.

Mr Sherborne said in his closing submissions today that “anybody in court could be forgiven for wondering how the case has been allowed to get this far”.

While Coleen and her England star husband Wayne did not attend court for the first time during the trial this morning, Rebekah came alone but left part-way through the opposing side’s submissions.

Mr Sherborne said Rebekah had “demonstrated herself to be an entirely unreliable witness” and this was shown by her “inability to accept the ordinary meaning of words such as ‘leak'”.

He said: “It was hard to keep up with Mrs Vardy as she gave evidence. Her case shifted at every stage and during oral evidence with further more fanciful explanations being made for the first time in the witness box.

“She gave implausible throwaway explanations while in the witness box as a way of distracting from what was before her or distancing herself from individuals.

“These are the marks of a witness whose evidence is ill-considered and lacking in candour.

“We say Mrs Vardy was a highly unreliable witness and her evidence should be treated with the utmost caution.”

Mr Sherborne also took aim at Rebekah’s agent Caroline, who did not give evidence at the trial and Jamie Vardy, who attended court for the last day of evidence when ex-teammate Wayne Rooney gave his testimony.

Of Caroline’s absence, Mr Sherborne said: “No Caroline Watt is like Hamlet without the Prince of Denmark.”

He added: “Ms Watt’s phone was dropped in the water whilst on a boat trip in Scotland in August.

“This ill-fated trip took place only days after the court had required her device to be inspected, perhaps unpredictably as she was not a party to the claim.

“The story is fishy enough, no pun intended, given the date this device was ordered to be searched.”

He suggested Caroline had withdrawn her evidence from the trial because she “knew she was going to be found to have leaked if her evidence was tested”.

Earlier this week, Wayne told the court he had a conversation with Jamie during the 2016 Euros, asking him to tell Rebekah to “calm down” her media activity.

A spokesperson for Jamie then gave a statement outside court disputing this.

The statement said: “Wayne is talking nonsense. He must be confused because he never spoke to me about issues concerning Becky’s media work at Euro 2016.

“There was nothing to speak about, I know this because I discuss everything with Becky.”

Mr Sherborne said: “Mr Vardy, who made a brief appearance in court on the last day of evidence, did not give evidence in court, not in this courtroom, but chose to make a statement outside the court while we were all sitting here listening to evidence in his wife’s case.

“Of course it’s not lost on the court that, while perfectly willing to give a press statement, Mr Vardy was apparently unwilling to provide one for the purpose of these proceedings despite the fact he was aware – as well as his wife was – from April 1 this year that Mr Rooney was going to give that evidence.”

He added: “Or else the claimant did not want his evidence to be tested in the same way Mr Rooney’s was.”

The court was reminded of a Whatsapp sent by Caroline Watt to Rebekah Vardy in which they are discussing a story in The Sun about a car crash Coleen was alleged to have had.

In relation to a tweet Coleen had put out expressing her upset that the story had originated from a post on her private Instagram account, Caroline told Rebekah: “It wasn’t someone she trusted, it was me.”

Mr Sherborne said: “We see that in black and white in front of us.

“Mrs Vardy didn’t even respond to the message from Mrs Watt. She didn’t tell Mrs Rooney and she didn’t stop her having access. She said nothing.

“There is no message in response. That’s not because she was bathing her children and watching TV and never got back to Mrs Watt.

“It’s because there’s nothing to say. She knew perfectly well what Caroline Watt was doing and she approved it and that’s why it continued in 2019. In that one reveal message, we see Mrs Rooney was right in what she said in her reveal post and she still is.”