Sex Education star Chinenye Ezeudu, who plays Vivienne Odusanya in the hit series, has given her take on that penis costume scene.

Since it dropped on Netflix on Friday (September 17), everyone has been talking about the long-awaited third season of Sex Education.

Chinenye Ezeudu’s character Viv has gone through a transformation over the course of the last two seasons, from being a side character with no friends or self-esteem to becoming a more central part of the narrative, growing in confidence and more actively involved in the other characters’ lives.

“Viv is going through a lot,” she explained. “She is this straight-laced character who wants to achieve so much, but how far will she go to achieve that?

“She kind of struggles with her loyalty to Jackson and other people. This season, it’s a tug-of-war between what she wants, and what she can do. It’s really hard for her.

But I feel, at the end of it, she finds herself, and finds what is important to her.” 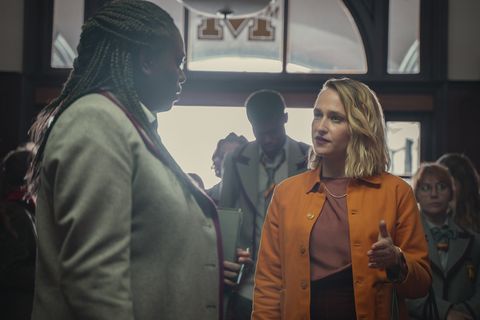 This season saw Viv become closer to Jackson (Kedar Williams-Stirling) and his new friend Cal (Dua Saleh). But when new headmaster Hope Haddon (Jemima Kirke) requests she take over Jackson’s role as Head Boy, she is torn between maintaining her friendships and pursuing Hope’s validation.

Viv has a watershed moment in the penultimate episode, when the students all declare themselves the “Sex School” and perform in open defiance of Hope’s new rules, in front of the press and prospective students.

The performance saw many students dressing up as various genitalia–including Viv in a penis costume.

“You know what? It was amazing,” she recalled. “There was a lot of collaboration in making that scene. We weren’t just thrown into it. But, yeah, I think it’s a big stunt for Viv, just showing up for what is right.

“And it’s just a rare moment of seeing her in her power, and just taking charge. Which is really nice to see.”