“Saturday Night Live” wasted no time diving into January’s plentiful political dramas in its first show of the year this weekend after more than a month’s holiday break.

The “politically correct” transformation follows the state’s real-life election of two Democrats to the U.S. Senate in a pair of Jan. 5 runoff contests, ousting incumbent Republicans.

“Do you know where the men’s room is?” Davidson, asks after he sits down.

“Yes, back in 2015,” cast member Beck Bennett tells Davidson while playing Georgia man “Skeeter, he/him,” the owner of the town’s electric truck dealership who looks a little like KFC’s Colonel Sanders. “We don’t have a men’s room, but the all-gender restroom is just down the way.” 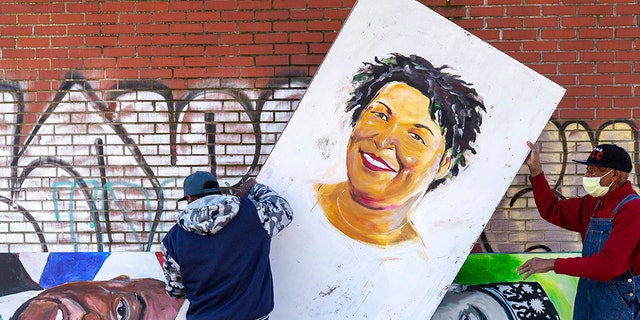 Artists set up a painting of Stacey Abrams in the King Historic District on Monday, Jan. 18, 2021, in honor of Martin Luther King Jr. Day, in Atlanta. (Associated Press)

After Davidson admits surprise the diner has an all-gender restroom, Bennett jokes that Davidson thinks all Georgians are “crazy Christian types.”

“I hope you know what we do to Jewish folks down here in Georgia,” Bennett as Skeeter warns ominously.

Later in the sketch, Deputy Jimmy, played by Andrew Dismukes, bursts into the diner, saying how “honored” he was that a group of Black Lives Matter activists wanted to “protest in our town!”

Then, a Floridian wearing a MAGA hat, played by Alex Moffatt, enters the diner and gets a stern reminder from Krasinski, the town’s sheriff.

“This is Stacey Abrams country,” the lawman warns, referring to the high-profile Democrat who lost a race for governor of the state in 2018 and then launched Fair Fight Action, a group credited with helping Democrats win the two U.S. Senate races.

But at the end of the sketch, the one thing that hasn’t changed is the diner patrons’ collective refusal to wear masks to protect themselves from the coronavirus.

“Because we’re free!” they shout.

The show also took on U.S. Rep. Marjorie Taylor Greene, R-Ga., during the cold open, did a sketch on the GameStop stock controversy and mocked the riots at the U.S. Capitol and former President Trump’s impeachment.