Soaring costs in 9% inflation UK: Lamb, milk and takeaways are all up

The soaring cost of goods in 9% inflation Britain: Average price of lamb has gone up 14.2%, milk by 13.2%, and a takeaway by 6.5% as 78 out of 80 items tracked by ONS get more expensive and Mr Kipling becomes latest to warn it is hiking prices

The prices of butter, sugar and milk have surged by 11.8 per cent, 12.2 per cent and 13.2 per cent respectively, new figures revealed today, as Premier Foods said it would be hiking the cost of Mr Kipling cakes in the face of surging inflation.

The Office for National Statistics (ONS) revealed that inflation hit 9 per cent in the year to April today, measured by the Consumer Prices Index (CPI). This is thought to be the highest figure for 40 years.

Most of the rise was due to the 54 per cent hike in the energy price cap, but prices on all but two of the more than 80 items that the ONS tracks have risen over the past year.

According to Retail Price Index figures – which are slightly different to the CPI – potatoes were one of the very few household grocery staples to drop in price over the year to April – down 1.2 per cent.

But overall food prices rose 6.8 per cent, with meats, oils and some animal products especially hit. 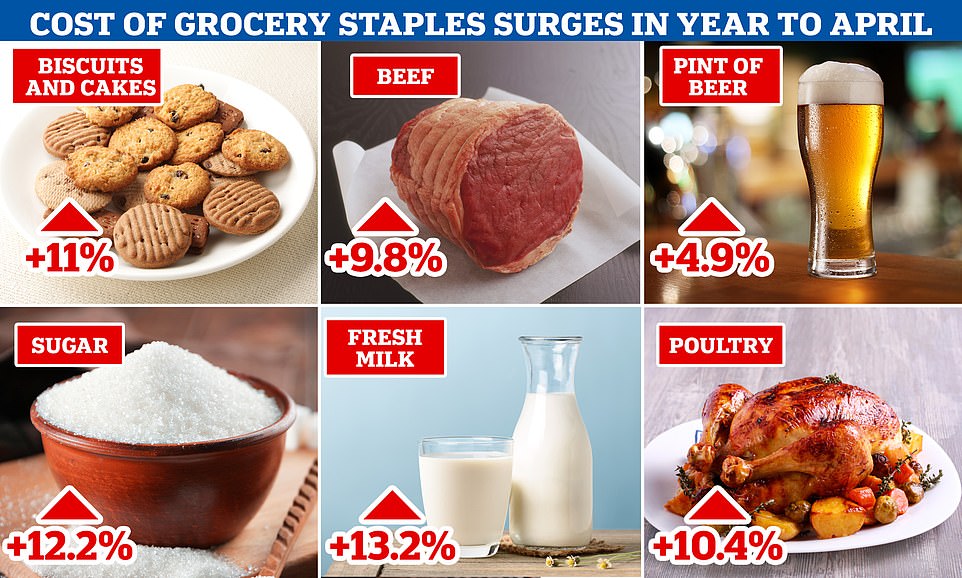 According to Retail Price Index figures – which are slightly different to the CPI – potatoes were one of the very few household grocery staples to drop in price over the year to April – down 1.2 per cent. But overall food prices rose 6.8 per cent, with meats, oils and some animal products especially hit

Butter prices rose 11.8 per cent and the price of oils and other fats soared 18.2 per cent over the last year after fears of a shortage sparked by the war in Ukraine – which is a major producer of sunflower oil.

Away from food, households were also hit by an 8.1 per cent extra price on their restaurant bills, while the price of takeaways and snacks rose 6.5 per cent.

Premier Foods – which also owns brands such as Oxo cubes, Sharwoods and Ambrosia – today said the Ukraine war was pushing up prices of many of its ingredients, including wheat and dairy, while fuel and energy costs are also rocketing.

Cost of grocery staples: Oil surges by 18% after Ukraine war with only potatoes now cheaper

UK Retail Prices Index, as of April 2022, over past year

Its boss Alex Whitehouse said the group raised prices by ‘high single digits’ in its year to April, but is expecting to ramp them up further with a ‘low double-digit rise’ in the year ahead.

He said the rises would be spread across its brands, though it is also launching cost efficiency programmes to try and tackle surging inflation.

Mr Whitehouse said: ‘Food inflation is pretty significant and for some families that’s going to be really tough.’

He pledged the group would ‘work really hard to offset as much of the inflation pressures as we can and help people as best we can by trying to keep prices down’.

Details of the price hike plans follow results showing the group’s pre-tax profits jumped 16.4 per cent to a higher than expected £102.6 million in the year to April 2.

The firm announced a 20 per cent rise in its shareholder dividend payout on the back of the bumper results, helping shares rise 6 per cent in morning trading today.

Bank of England Governor Andrew Bailey warned earlier this week that ‘apocalyptic’ food prices could be disastrous for the world’s poor.

Energy prices are also feeding into the rising food costs – farmers and food factories need gas, petrol and electricity to run their businesses and have to pass these costs onto customers.

This is also the case for many other products.

Drinking at a pub got more expensive too, with the cost of beer up 4.9 per cent and wine rising 6.2 per cent. Alcohol prices increased less rapidly in off licences and supermarkets.

Food and Drink Federation chief executive Karen Betts said that the figures are slightly worse than food manufacturers had feared.

‘This is a very worrying time for many households, and food and drink businesses are continuing to do everything they can to contain food-price inflation,’ she said.

‘Ingredient price rises have been relentless for more than a year now, as a result of pressures in the global supply chain caused by the Covid-19 pandemic.

‘The war in Ukraine, with both Ukraine and Russia important suppliers of commodities like wheat and food oils, as well as energy and fertiliser, has made the situation worse.’ 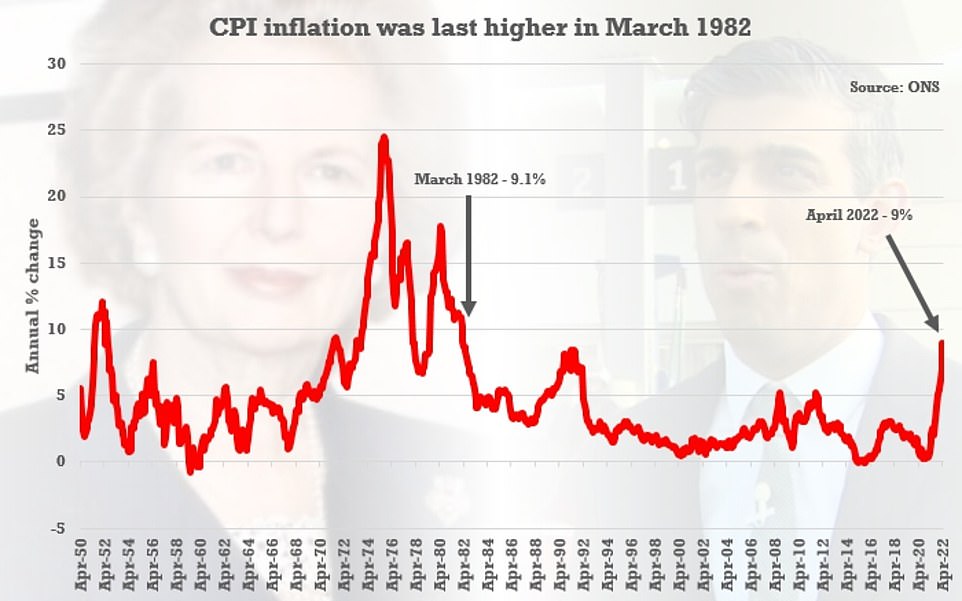 Newly-modelled figures from the ONS show that CPI would have last been above the April 2022 level of 9 per cent in March 1982 – when it was 9.1 per cent