After blasting Kanye West for cutting him from ‘DONDA,’ Soulja Boy was back at it again – and this time, he taunted Ye with a gross comment about West’s estranged wife, Kim Kardashian.

“I might diss u every day for the rest of my life how I’m feeling, [Kanye West],” tweeted Soulja Boy on Aug. 31, marking the second day of the (increasingly one-sided) feud between him and Kanye, 44. Apparently, Soulja, 31, was still mad about his verse was cut from “Remote Control,” a track off of Kanye’s DONDA, and the “Crank That” rapper decided to hit Ye where it hurts: by dragging in Kim Kardashian. “I was the first rapper with [Kim Kardashian], not u,” tweeted Soulja, along with a throwback photo of him and Kim, apparently taken in the late 2000s.

In addition to this tired, gross remark about Kim, Soulja challenged Kanye to a fight (“I wanna fight. Do u know how to fight? @kanyewest I feel like u a hoe. Let’s get in the ring?”), mocked Ye for his support of Donald Trump (“really wore that trump hat too. You did a lot of corny sh-t in ur career and got a pass”), and came out as a Swifty? “Bitch ass n—- apologize to Taylor Swift,” tweeted Soulja. “If [you] would have ran on stage and snatched a mic from my hand I would have knocked yo ass out live on MTV,” he added, referencing the now-infamous “I’mma let you finish” moment from the 2009 MTV VMAs.

Soulja isn’t the first rapper to mock Kanye about getting “with” Kim before she and Ye started dating (Ray J had a Billboard Hot 100 song claiming “I Hit It First,” after all.) Drake even ended up feeling Kanye’s wrath in 2018 after people suggested Kim was the “Kiki” in Drizzy’s “In My Feelings.” Kanye, during a series of Instagram videos, demanded that Drake take “accountability” for “people making rumors or thinking that you f–ked my wife,” instead of being quiet about the matter.

“You know,” continued Ye, “if I had a girlfriend from Chicago, her name was Renita, and you was married to Rihanna, I wouldn’t make no song called ‘Riri.’ So when you’re like, ‘Ah I don’t know where it come from’—you too smart for that, bro. You know where that comes from. Don’t make no record with nothing that can be confused.” 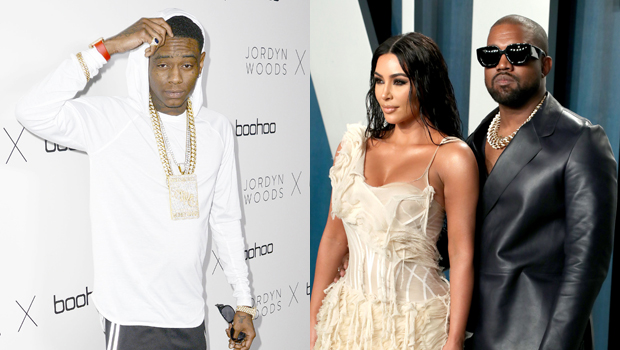 Though Soulja, Ray J, and similarly sophomoric claims are grossly misogynistic – implying that Kim is a prize to be won and not a woman with her own agency – they seem to be effective in riling Kanye up. However, Kanye has yet to respond to Soulja or Chris Brown or anyone else mad at DONDA’s roll-out. Kanye’s Twitter has been dead since November 2020, and his Instagram (currently) has just two posts: the one where he claims Universal “put my album out without my approval,” and one of Kim at the Chicago listening party, dressed in a Balenciaga wedding gown.