Taylor Momsen is opening up in a very rare interview about her experience filming Dr. Seuss’ How The Grinch Stole Christmas.

If you recall, the now 27-year-old singer played Cindy Lou Who in the 2000 film starring Jim Carrey as the title character.

Taylor, who was just seven when she starred in the movie, spoke to Today about the film, which is celebrating its’ 20th anniversary.

“The thing that I remember the most that probably resonated with me to this day as an adult was the first time that I went into a recording studio and got to work with the amazing James Horner,” she shared. “And I’ll never forget walking into this beautiful studio, with this immaculate console in front of me, and putting headphones on and singing into a microphone for the first time, singing ‘Where Are You Christmas’.”

Taylor added, “That was such an impactful moment in my life because it made me go, ‘I wanna make music for the rest of my life. I love being’ in a recording studio.’” 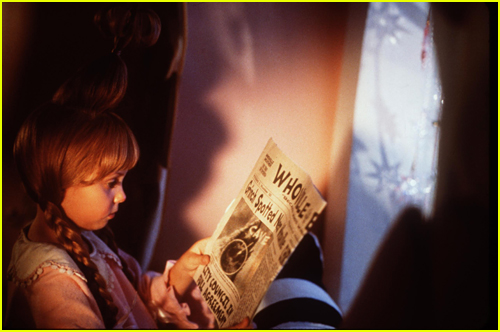 She also spoke about working with Jim in the whimsical movie, calling him “incomparable…I remember him being so kind, so concerned, but so methodical with what he was doing. Even at that young of an age, I remember watching him and going, ‘I’m watching an artist right now at work.’”

“I think that people love ‘The Grinch’ just simply because the core of the story is so sweet and it’s so heartwarming and it has such a good message,” Taylor shared of the film’s message and iconic status. “Aside from how amazing Jim Carrey’s performance is and the theatrics that went into the shoot, just the way the film looks and moves and is edited is amazing in its own right.”

Dr. Seuss’ How The Grinch Stole Christmas is airing throughout the month on Freeform. See the full 25 Days of Christmas schedule here!