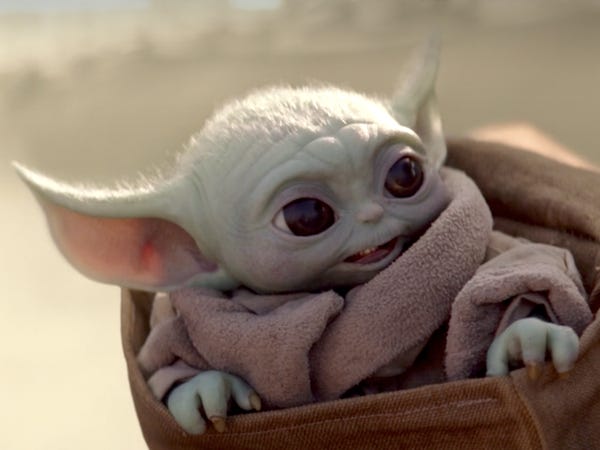 Disney Plus' live-action "Star Wars" series "The Mandalorian" returned on Friday with the second season premiere.

Fans were delighted to see more adventures from the eponymous bounty hunter and his small companion "Baby Yoda" (known in the show as the Child).

Over the weekend, people shared many jokes and memes about the Child on Twitter and Reddit. We're here to bring you the best tweets and posts we saw, and celebrate the joyous return of the adorable little "Baby Yoda" to our TV screens.

On Twitter, people reveled in the return of the adorable little creature

On Reddit, folks made jokes about the Mandalorian's parenting skills and the show's 'Star Wars' references

A fan on TikTok created a mashup meme of 'The Mandalorian,' Baby Yoda, and the viral skateboarder drinking cranberry juice

This final one comes from a TikTok trend you probably saw last month, which began when a man named Nathan Apodaca, also known as @420doggface208, made a video lipsyncing to Fleetwood Mac while longboarding with a bottle of cranberry juice.

In "The Mandalorian" TikTok, the person set the footage of the bounty hunter and Baby Yoda speeding across the desert to the same Fleetwood Mac song, "Dreams."

The next episode of "The Mandalorian" will premiere this coming Friday at 3 .m. ET/12 a.m. PST, where fans will have even more scenes of Baby Yoda to delight in.