There’s a surprise hit on television this Christmas. But it doesn’t involve snow, or Santa, or talking elves — or even the odd B-list celebrity.

It isn’t even new — it was made in 1994, in Blackpool, on a teeny budget, by a then-fledgling filmmaker called Philippa Lowthorpe. And there is nothing remotely glamorous, flashy and action-packed about it, either.

In fact, very little happens at all in Three Salons At The Seaside, a fly-on-the-wall documentary about day-to-day life in a series of net-curtained, pink-rollered hair salons in Blackpool called Tricia’s, Vanity Box and Mary’s Way.

Instead, this exquisite 40-minute film takes us back to the lost land of the weekly wash and set. Big hood driers and My Weekly magazines with Princess Diana on the cover. 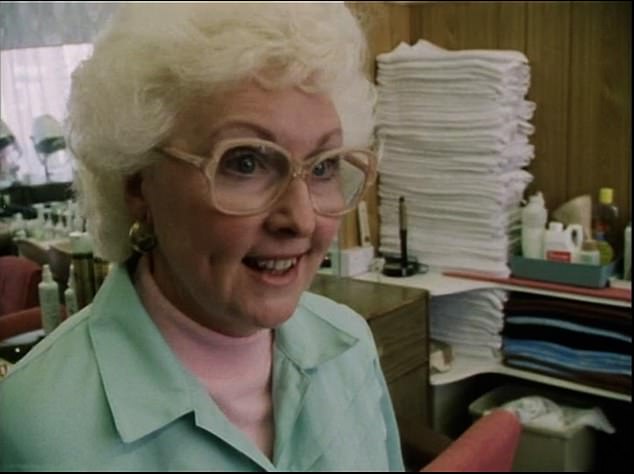 The 1990s cult-classic documentary follows the lives of the owners, workers and patrons of three Blackpool hair salons 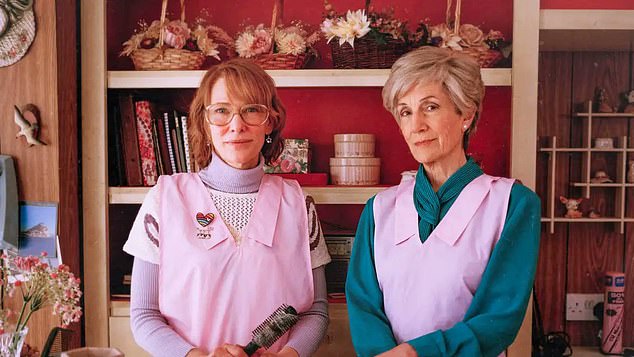 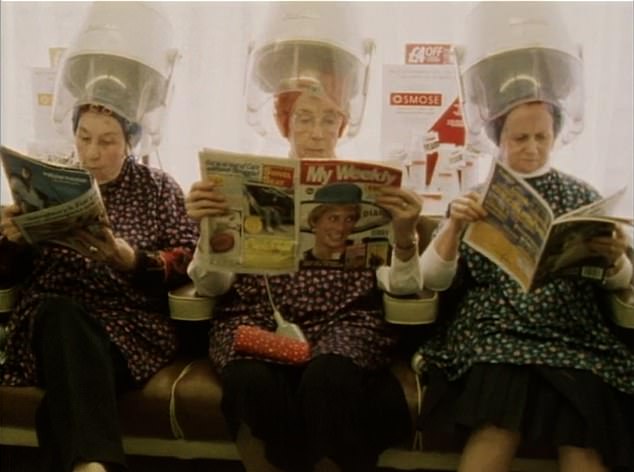 Layers of lacquer, headscarves, brooches, walking sticks and gammy hips. Dark humour and petty gossip — and, for so many silver-haired ladies (always called Mrs, never by their first name), a beacon of comfort and joy in the relentless grey of ageing.

Amid grim talk of colostomy bags and the looming prospect of nursing homes, the film’s kindness and warmth is still so uplifting, so nourishing for the soul that, nearly 30 years on, it is earning another great army of fans.

Not just here in the UK — where it has been re-released on BBC iPlayer and selected as one of the best documentaries of the past 50 years by the Grierson Trust, a charity that promotes documentary filmmaking.

But also in Australia, Asia, South Africa and the U.S., where Oscar-winning actress Cate Blanchett was so entranced (after her hairdresser insisted she watch it) that she and Dame Harriet Walter have been inspired to make a new ‘mockumentary’ called Two Hairdressers In Bagglyport.

It was filmed in what was Mary’s Way salon (now Salon K) in Blackpool earlier this year.

It is thought to be a spoof series — though done very much in tribute (Cate says the original reminded her of her grandmother) — with the actresses playing two hairdressers.

Former owner Mary Burney, now 75 and retired, tells me she popped along with her dog to have a look during filming.

‘I tell you, I didn’t know who they were. They didn’t even look familiar. Though apparently Harriet’s a Dame,’ she says. ‘I was just impressed by how nice they were.’ 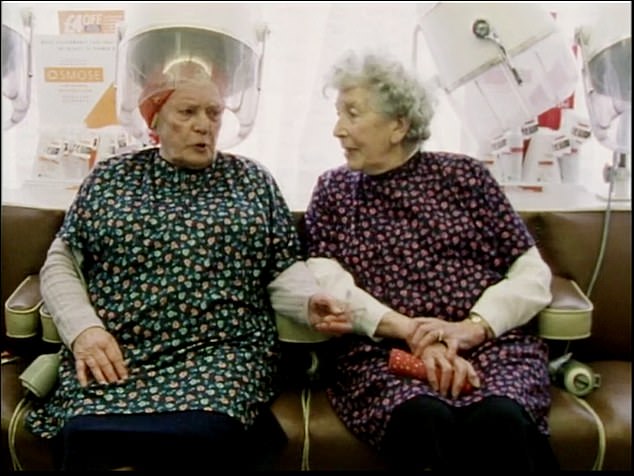 ‘Life, death and everything between — loss and fragility and strength and the beauty of old age,’ says Lowthorpe of the hair salons 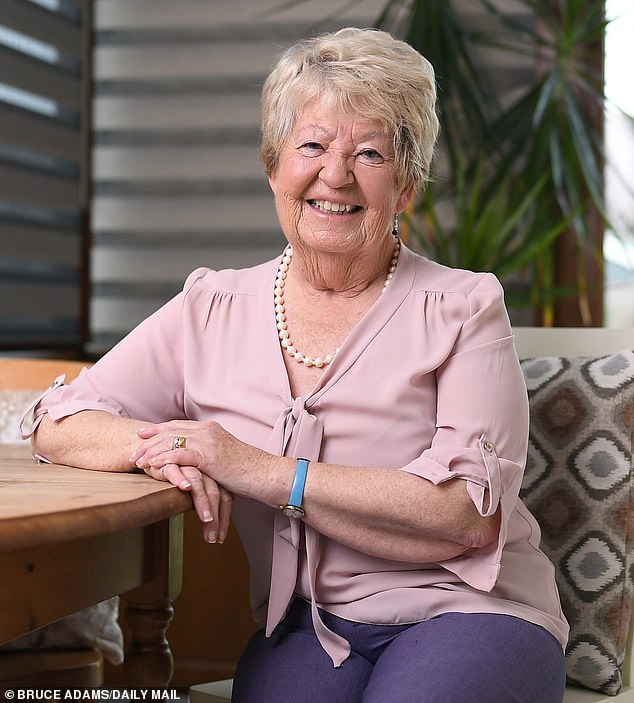 Hairdresser Mary Burney ran Mary’s Way, one of the three hairdressers featured in the original documentary. She retired aged 63, passing on the keys to her salon

But they recognised Mary.

‘Someone shouted, “Excuse me, but are you Mary? You haven’t changed at all”,’ she says. ‘So I must have looked the devil 30 years ago because I have got a million wrinkles now!’

So why is this quirky little film so damn popular? Well, as I’m sure Cate and Dame Harriet would tell you, the original was about so much more than having your hair done.

‘Life, death and everything between — loss and fragility and strength and the beauty of old age,’ says Lowthorpe, who went on to become the first woman to win a Best Director: Fiction award at the Baftas (for Call The Midwife). She has also directed episodes of The Crown.

During the film, we see how the immaculately coiffured proprietress of Vanity Box, Hilary, keeps a smart black handbag ready under the counter to lend to clients for funerals. ‘With money and a mint inside, just in case,’ she says.

There’s also a list in the back of her bookings ledger giving the details and date of anyone who’s passed away. ‘We’d hate to get anything wrong!’

But for all the pain and suffering — and these wonderful women do seem to have an extraordinary number of dead or housebound husbands — it’s the wit and warmth that really shine through. 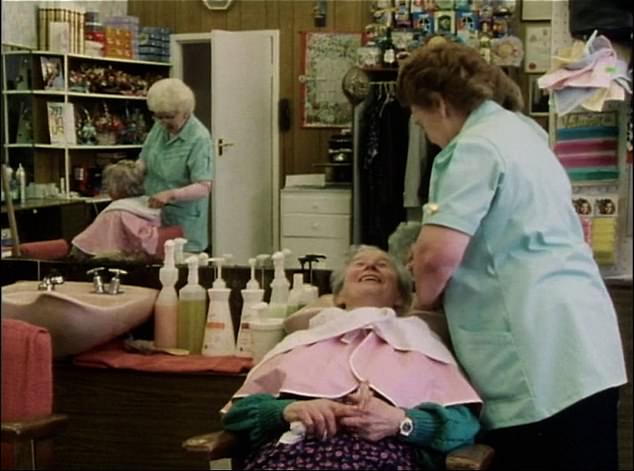 There are the eventful visits from the wet-fish man and the pie man, and the very lively discussions about Coronation Street star Lynne Perrie after her trip to the plastic surgeon.

‘Oooh, don’t she look horrendous; she looks like a chipmunk don’t she!’ says Hilary. ‘She had wrinkles down her cheeks. They’ve gone away . . . But I’m sure they’ve done her mouth wrong. Terrible.’

And not forgetting the lady who sadly passed away while on the loo upstairs in Vanity Box. (‘At least it was after her appointment — so she looked smart when she went — but it was a week or two before anyone used the toilet.’)

Lowthorpe says she was inspired by her aunts Anne and Hilda from Yorkshire and their wonderful, witty Alan Bennett-ish chat.

‘You never saw old women on the telly,’ she says. ‘I wanted to show their beauty. To celebrate them.’

She was also always obsessed with hairdressing. As a child, she paid her sister in halfpenny sweets to let her do hers — ‘in high buns and highfalutin hairdos’.

Such is her love for the ritual that she still tries to shoehorn a hairdresser scene into every project she directs. (She even persuaded Peter Morgan to include a scene with Claire Foy, as Queen Elizabeth, getting her hair done in The Crown.)

But when she first mooted the idea of Three Salons to her colleagues at the BBC in the early 90s, they were nonplussed.

‘They thought women talking in a salon would be very boring and not at all interesting,’ she says. And to be fair, when she and a researcher approached the salon owners in 1993, they were just as bemused.

‘We looked at her as if she was mad,’ says Mary Burney. ‘We didn’t know about fly-on-the-wall back then. 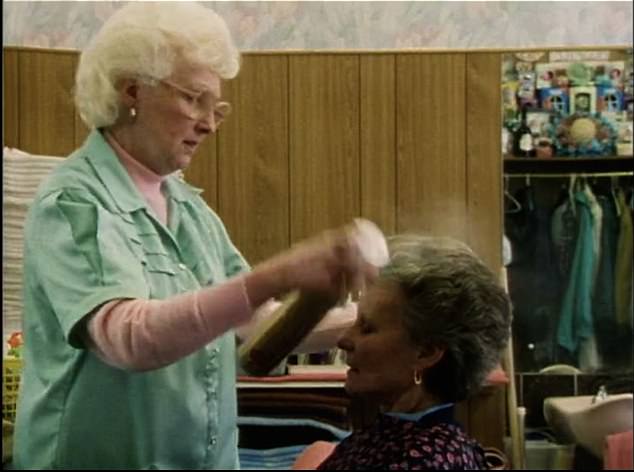 ‘You never saw old women on the telly,’ documentary creator Philippa Lowthorpe says. ‘I wanted to show their beauty. To celebrate them’

‘But I thought, “In for a penny, in for a pound”, and told them they’d have to work — make coffees and so on. I wasn’t having them just be sat about. In the end, the crew were wonderful — they even got our lunches ready!’

Her clients weren’t much phased, either. ‘They just said, “Oh, right. I’ll put my best shoes on then”.’

And during the six days of filming — camera crews squashing in and out of the three tiny salons — it was business as usual.

Washes, sets, brush-outs, perms. Laughing, crying, discussing care homes, strokes on caravan holidays, trips to Tenerife, the travesty of someone ‘on the social’ getting new free windows and a visit to the local Chinese.

‘I’ve not had a lot of stress in my life, but I think that’s because we shared it all — whatever was wrong, we’d have a good laugh about it,’ says Mary. ‘We discussed everything — politics and religion and widowhood. We talked for Britain, and it was all sorted by the time you’d had your hair done. We were a lot more than just hairdressers.’

Indeed, for many of them, it was the chat that kept them sane.

‘We didn’t have all these mental issues that people have now because we talked about things more,’ says Mary. ‘Now everyone has their heads in their phones.’

Which is why so many of the customers arrived like clockwork, sometimes twice a week. The loneliest were adept at stretching out their 45-minute appointments, even offering to make the tea, sweep up and wash other customers’ hair.

But when the BBC film came out back in 1994 — slow and gentle, with no annoying narration plastered over the top — none of them really got it.

‘I couldn’t see why anyone would want to watch it,’ says Mary.

But it soon made a huge splash. Many critics declared it their documentary of the year. The late, great comedienne Victoria Wood said it was her favourite ever.

Actress Caroline Aherne played it on a loop in her office. And then it went global, with the University of Nagoya in Japan even reportedly keeping a copy (as an example of how ordinary people lived in Britain). 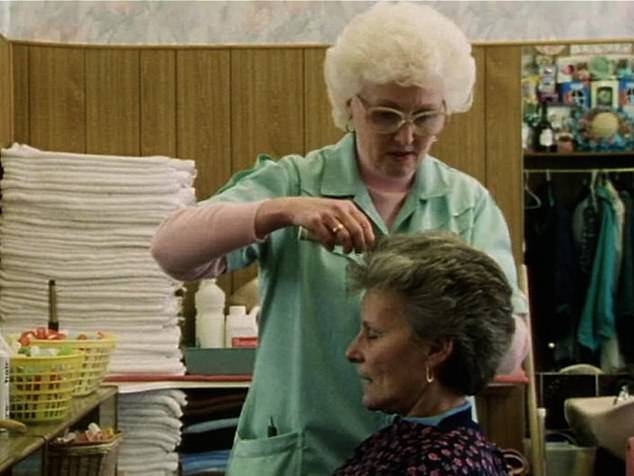 ‘For the first two years, I’d find people stood outside the salon, looking in,’ says Mary. Assuming they were lost, she’d pop out to help and they’d tell her they’d come from Australia, or some other distant land

Back in Blackpool, though, Mary and Co remained resolutely unaffected. ‘We enjoyed the fuss for a week or two,’ she says. ‘But we didn’t want any more business. We were always booked solid ’til Christmas.’

Even when fans made pilgrimages to Blackpool, their immaculately lacquered heads weren’t turned.

‘For the first two years, I’d find people stood outside the salon, looking in,’ says Mary. Assuming they were lost, she’d pop out to help and they’d tell her they’d come from Australia, or some other distant land.

‘We’d always invite them in for a look, and a coffee and a sit down,’ she says.

Eventually, the pilgrims stopped coming. And the chat reverted back to bunions, beta blockers and the demise of the local cafe. Life went on.

Of course — as Mary points out — the trouble with hairdressing is that you have the same clients for years and years. ‘Then they get old and start dying off and the younger ones don’t want an old lady doing their hair,’ she says.

‘When you’re 18, you think someone of 30 is already one foot in the grave. So at 60 you’ve no chance! I loved it and if I did my life again, I’d have exactly the same job, but you know when it’s time.’

Tricia’s and Vanity Box have both now closed down, but at the newly named Salon K, full service continues.

And so it was until last January, when Kay received a visit from a man who said Cate Blanchett wanted to make a spoof version of Three Salons At The Seaside, shot in her shop.

A fun, warm homage — with Cate in pink nylon overalls, an orange perm and prosthetic buck teeth, chatting about anything and everything as she and Dame Harriet cut, set and wash elderly hair.

‘Obviously, I thought it was a load of rubbish,’ says Kay. ‘So I sent him off with a flea in his ear!’

But it was real, and a few months later an entire crew turned up from the States with the two actresses — who were not, it seems, naturals with the scissors. ‘I have no comment on that; I wouldn’t like to say,’ Kay adds with a twinkle.

For Philippa Lowthorpe, of course, this new lease of attention is hugely flattering: ‘I only found out about [the Cate Blanchett series] last week!’

But the real stars, she says, are Mary, Hilary, Tricia and their loyal customers.

‘These amazing ladies, these brilliant role models, are bringing so much pleasure and speaking to a younger generation.’

Watch Three Salons At The Seaside on bbc.co.uk/iplayer