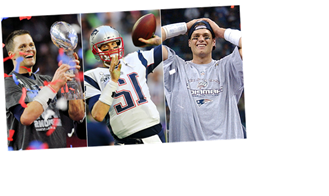 Tom Brady is already in rarefied air in the NFL, a living legend who’s not only still in the game, but still at the very top.

As he approaches his 10th Super Bowl, there are plenty of headlines to be made out of the quarterback’s historic career, as well as his impressive road to yet another championship game. It will be his first Super Bowl not under center for the New England Patriots, a team he led to their very first Super Bowl victory in 2001, and then on to a record-tying six over the course of his career.

It will also be Brady’s first championship game with the Tampa Bay Buccaneers — a franchise with a single Super Bowl victory to their name — an attempt to return glory on the team’s home field in Florida. And it will no doubt fire up the conversation about a legacy that’s been debated for years already, even as the quarterback himself shows no signs of slowing down.

Brady already owns plenty of regular season and postseason records, including most Super Bowl appearances by a single player (this game will put him at 10, while the runners-up sit at just six), and 19 years after starting his first NFL championship game, the QB will take the field once again with very little to prove to anyone but himself. It’s indisputable that he’s the greatest quarterback playing the game right now, and with the majority of his career spent with one of the games best-ever coaches, at a franchise that was often able to build a great team around him, there’s a strong case to be made that Brady is the greatest of all time.

So what does another Super Bowl really mean? Many football fans see this as the passing of a torch, as Brady faces off against one of the league’s brightest young talents in Kansas City Chiefs quarterback Patrick Mahomes. But to an elite competitor like Brady, there’s no consolation prize. He’s in it for the win, just like the nine Super Bowls before.

Ahead of kickoff at Super Bowl LV, let’s take a look back at Brady’s Super Bowls past — the GOAT’s biggest games. 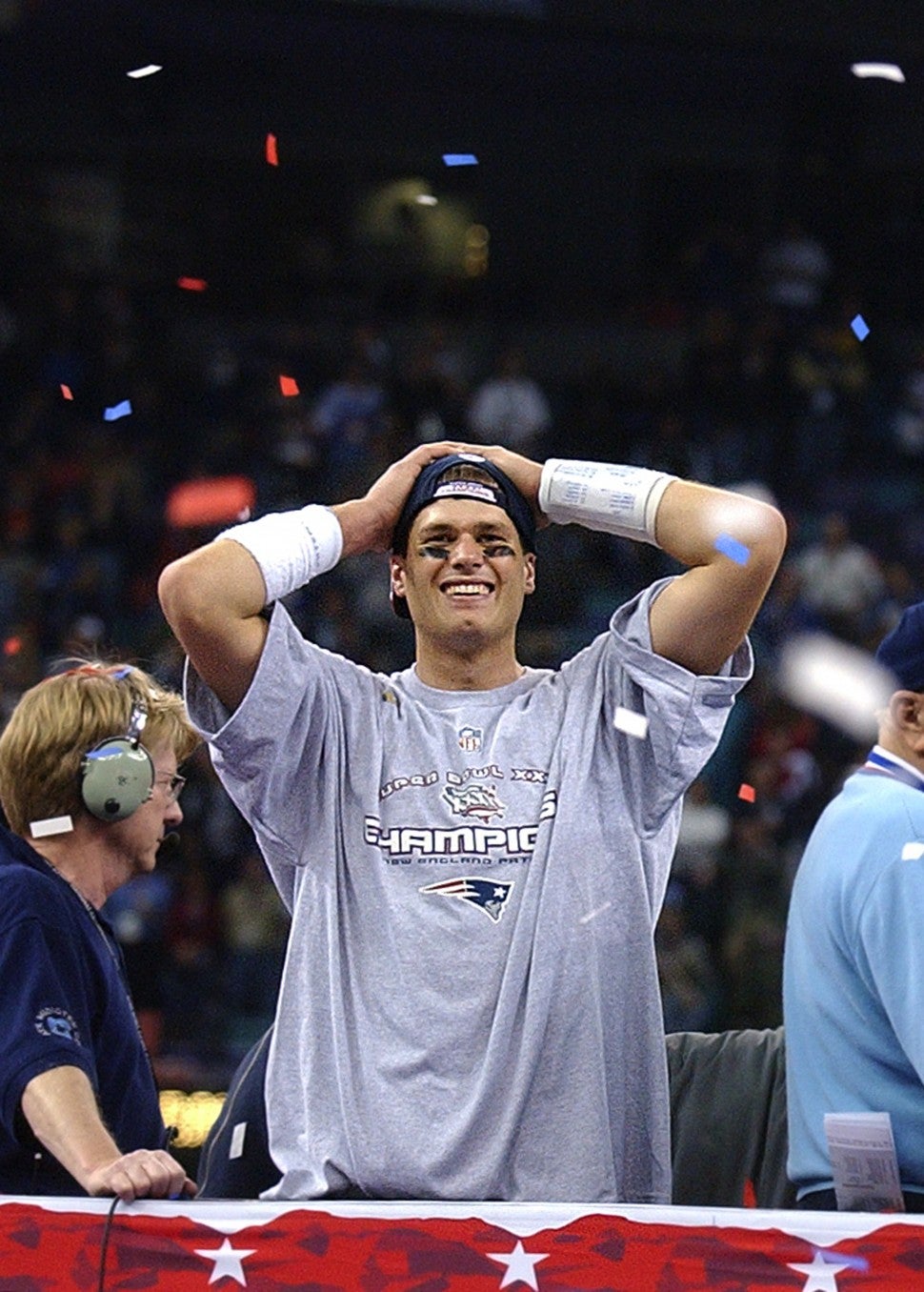 Brady’s first Super Bowl came on just his second season in the NFL. After taking over for injured Patriots starter Drew Bledsoe during the second game of the season, the QB never looked back, finding his stride in the back half of the season and leading the Pats to their first AFC East victory since 1997. In the playoffs, the team went on to beat the stalwart Oakland Raiders and Pittsburgh Steelers before facing off against the Kurt Warner-led St. Louis Rams in the Super Bowl. Despite their underdog status, Brady led the team to a game-winning drive, becoming the game MVP, the youngest-ever QB to win a Super Bowl, and an instant franchise favorite. 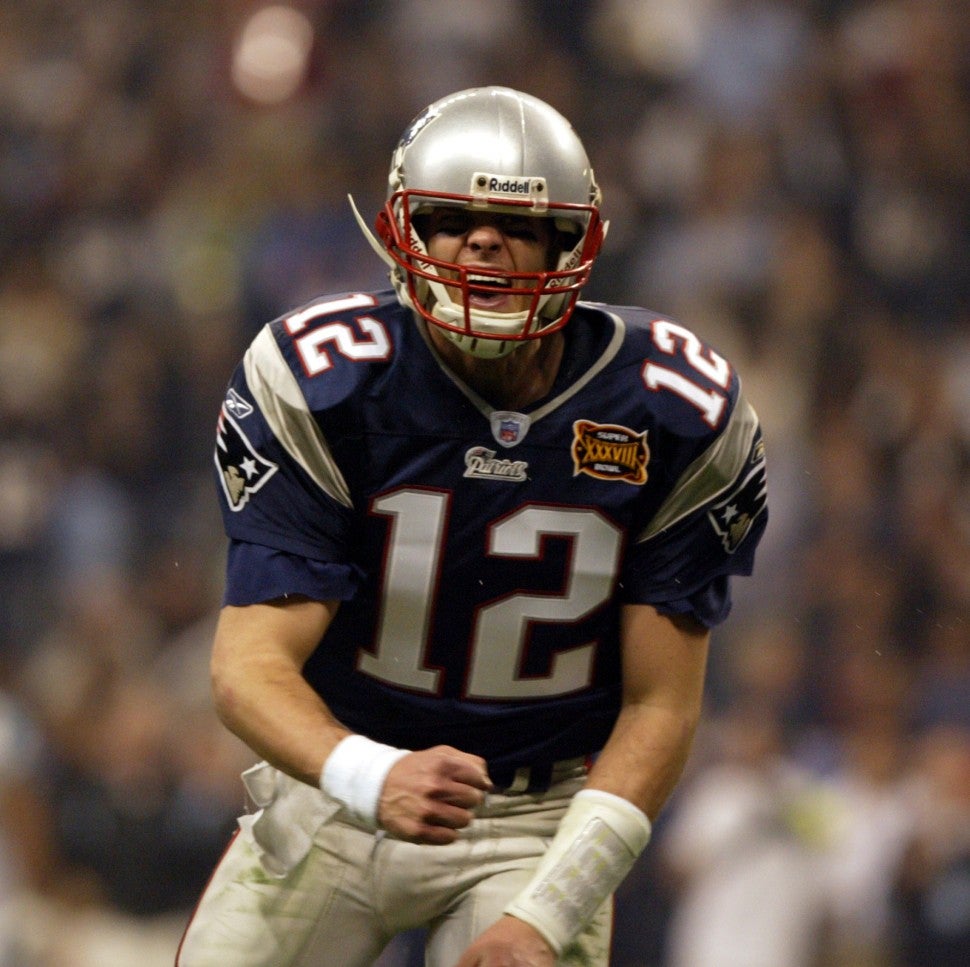 After opening the 2003 season at 2–2, Brady led the Pats to 12 consecutive victories, finishing the regular season at 14–2 to win the AFC East. In the playoffs, they earned a first-round bye and then took on the Tennessee Titans and the Indianapolis Colts — Brady’s first postseason showdown with fellow great Peyton Manning. The ensuing Super Bowl was hailed as one of the greatest championship games in NFL history, with Brady setting a record for most QB completions on his way to another Super Bowl MVP. However, the game would ultimately be most remembered for another reason: the halftime show controversy from Janet Jackson and Justin Timberlake. 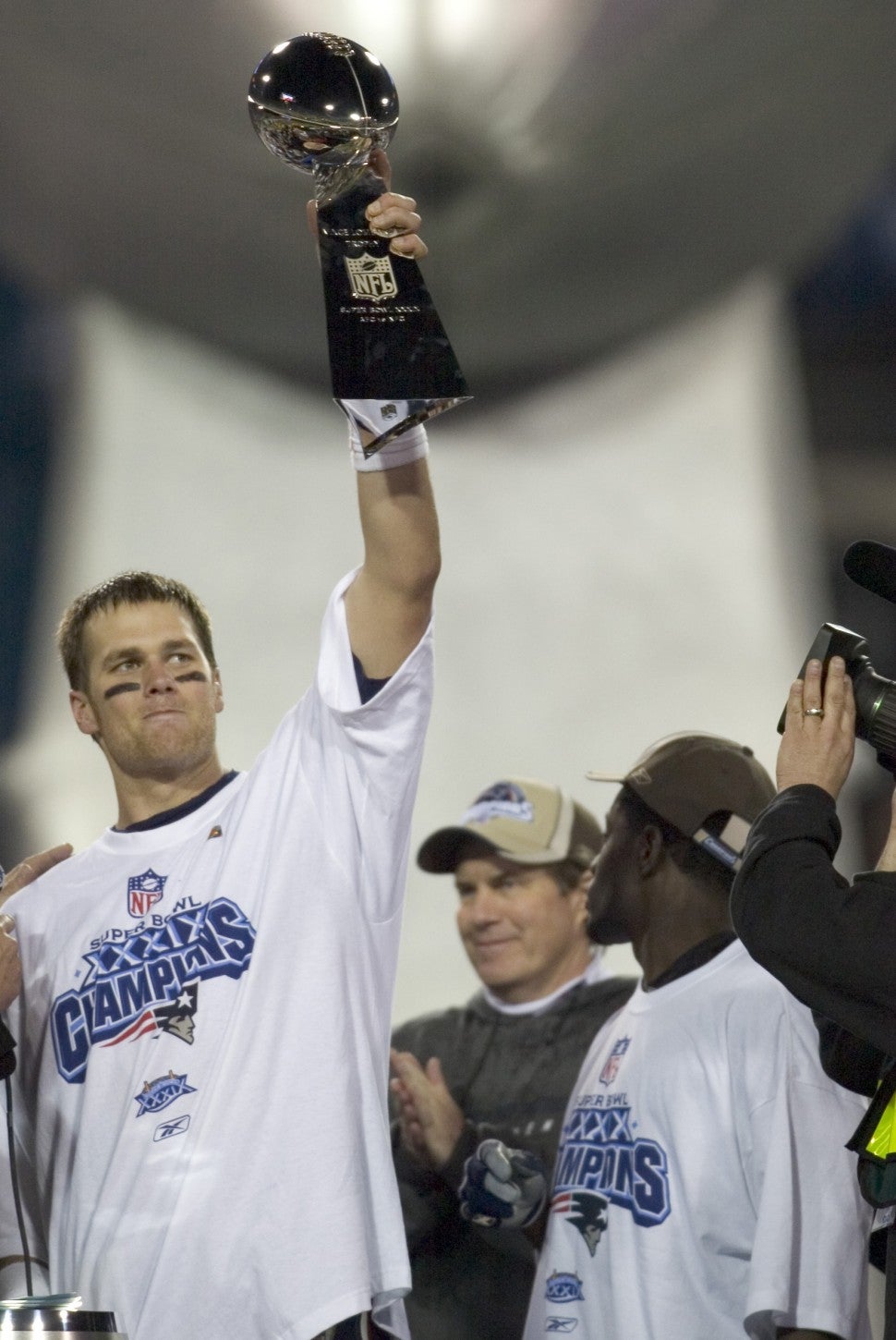 The Brady dynasty was well underway by the Pats’ 2004 season, during which they finished 14-2 once again, leading to another AFC East championship and a second consecutive Pro Bowl selection for Brady. In the playoffs, they faced Manning and the Colts once again, as well as the rising Pittsburgh Steelers, who would go on to be one of their most contentious opponents in the AFC. In the Super Bowl, they won in a close game over Donovan McNabb and the Philadelphia Eagles, becoming, to this day, the most recent team to win consecutive Super Bowls back to back. 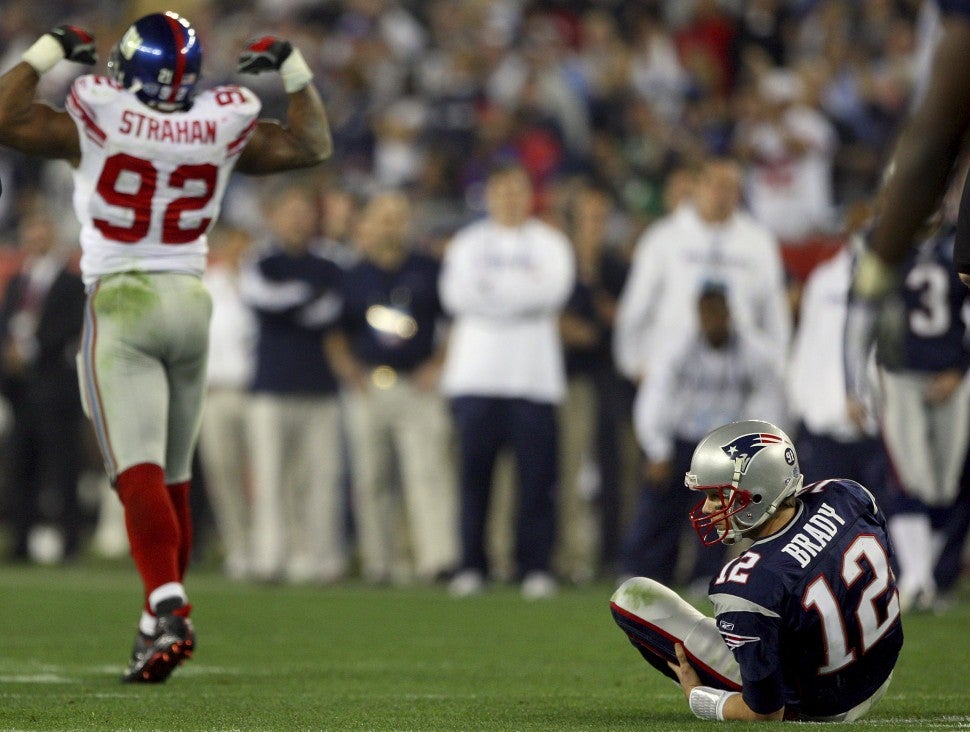 It wasn’t until his fourth Super Bowl appearance that Brady finally tasted defeat in the big game. After getting knocked out in the postseason for two years in a row, the Pats were on their way to a perfect season in 2007 — thanks in part to a record-setting partnership between Brady and wide receiver Randy Moss — which culminated in 50 touchdown passes, the first undefeated regular season since the 16-game schedule was implemented in 1978, and Most Valuable Player and Offensive Player of the Year honors for Brady. However, the Pats’ dreams of a perfect 19-0 run was dashed by David Tyree’s infamous “Helmet Catch” as Eli Manning and the Giants came from behind to snatch victory in a devastating manner, which New England fans carry with them to this day. 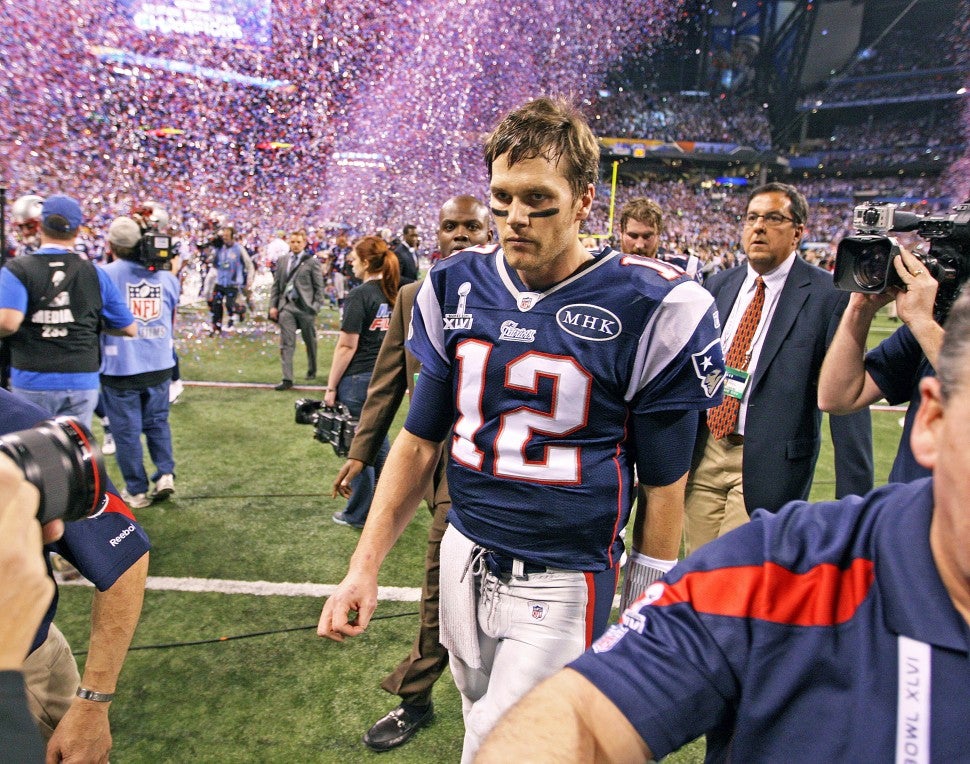 Four years after their heartbreaking Super Bowl loss to the Giants, the rematch was on between Brady and Eli Manning at Super Bowl XLVI in Indianapolis. The Pats came in with a 13-3 record, and seemed to be the clear favorites as the Giants’ powerful defense had pulled them through the playoffs after a 9-7 regular season. However, New York would once again prove to be Brady’s kryptonite, and the Pats’ hopes would land like the quarterback’s final pass of the game toward favored tight end Rob Gronkowski, just out of their hands. 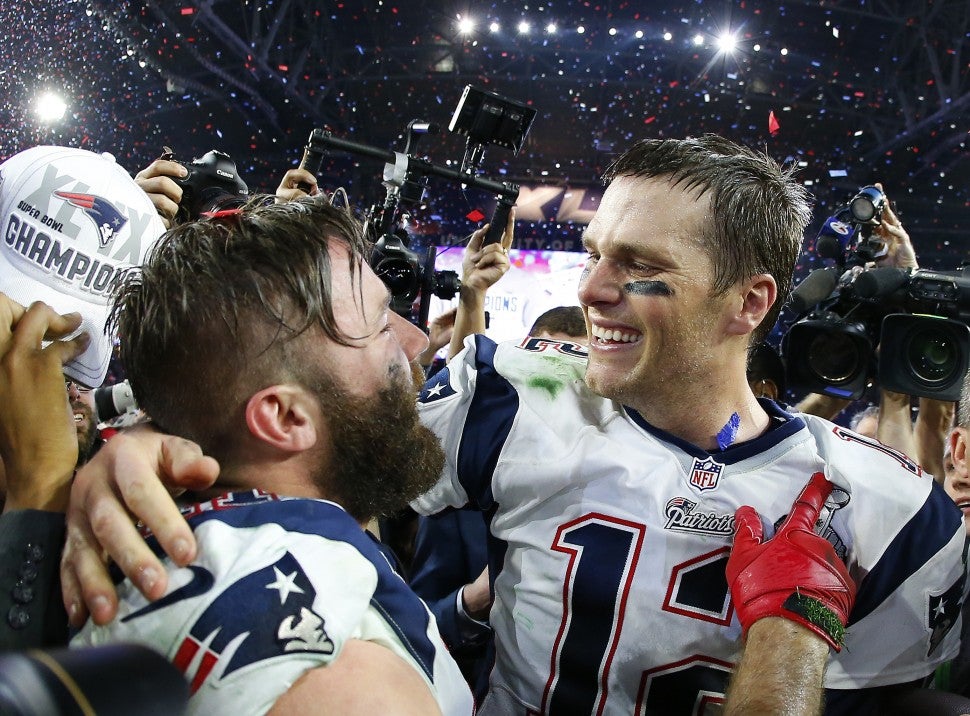 Finally, in 2015, victory would return to New England. After an up and down regular season, Brady was in the position to start breaking postseason records as the Pats made their push toward another Super Bowl. He topped childhood hero Joe Montana’s career record for postseason touchdowns with 46. (This gap would continue to widen throughout the years; Brady now has 80 career postseason TDs, while Montana and Aaron Rodgers sit in distant second at 45.) He also won a record-setting ninth AFC Championship game en route to a matchup with rising star QB Russell Wilson and the Seattle Seahawks’ dominant defense. The “Legion of Boom” wasn’t enough, however, to keep Brady from a record-tying fourth Super Bowl win and third Super Bowl MVP, as well as a Super Bowl record for pass completions that he would break again, two years later. 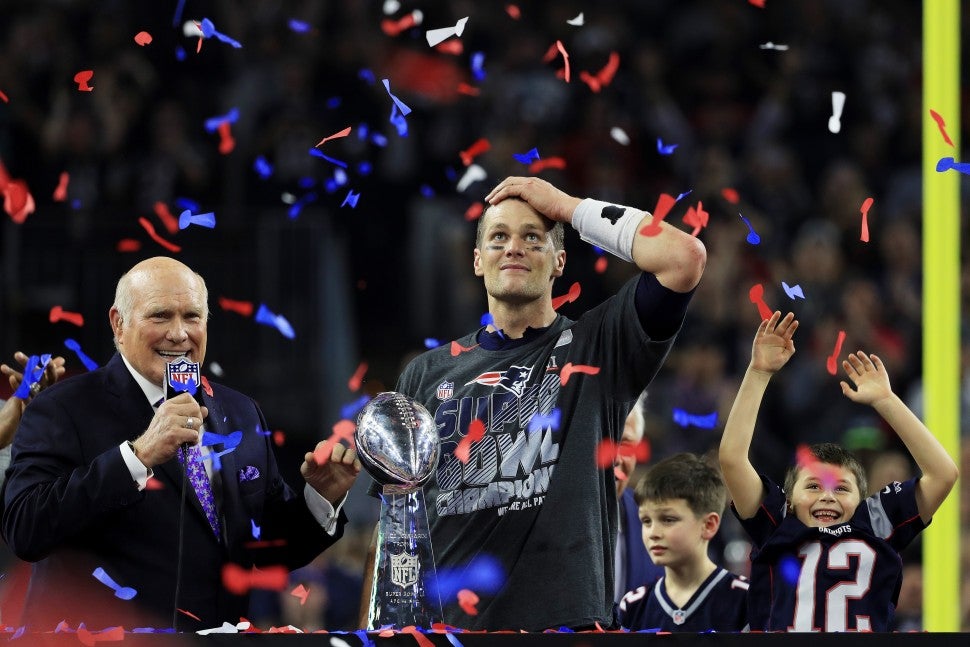 Just when some football fans may have thought Brady was no longer capable of surprises, along came the 2016 season. The Pats started the year with Jimmy Garoppolo and Jacoby Brissett under center, as their starter was serving his four-game suspension in the “Deflategate” scandal. Even still, Brady broke records, beating out Brett Favre’s mark for most regular season touchdown passes with one franchise and Peyton Manning’s mark for career victories. But nothing would be more shockingly triumphant than the actual championship game itself, where Brady rallied the Pats to a victory in the Super Bowl’s first-ever overtime game, after being down 28-3 in the third quarter. For his efforts, Brady clinched a record-breaking fourth Super Bowl MVP and tied the record for most Super Bowl wins by any player. 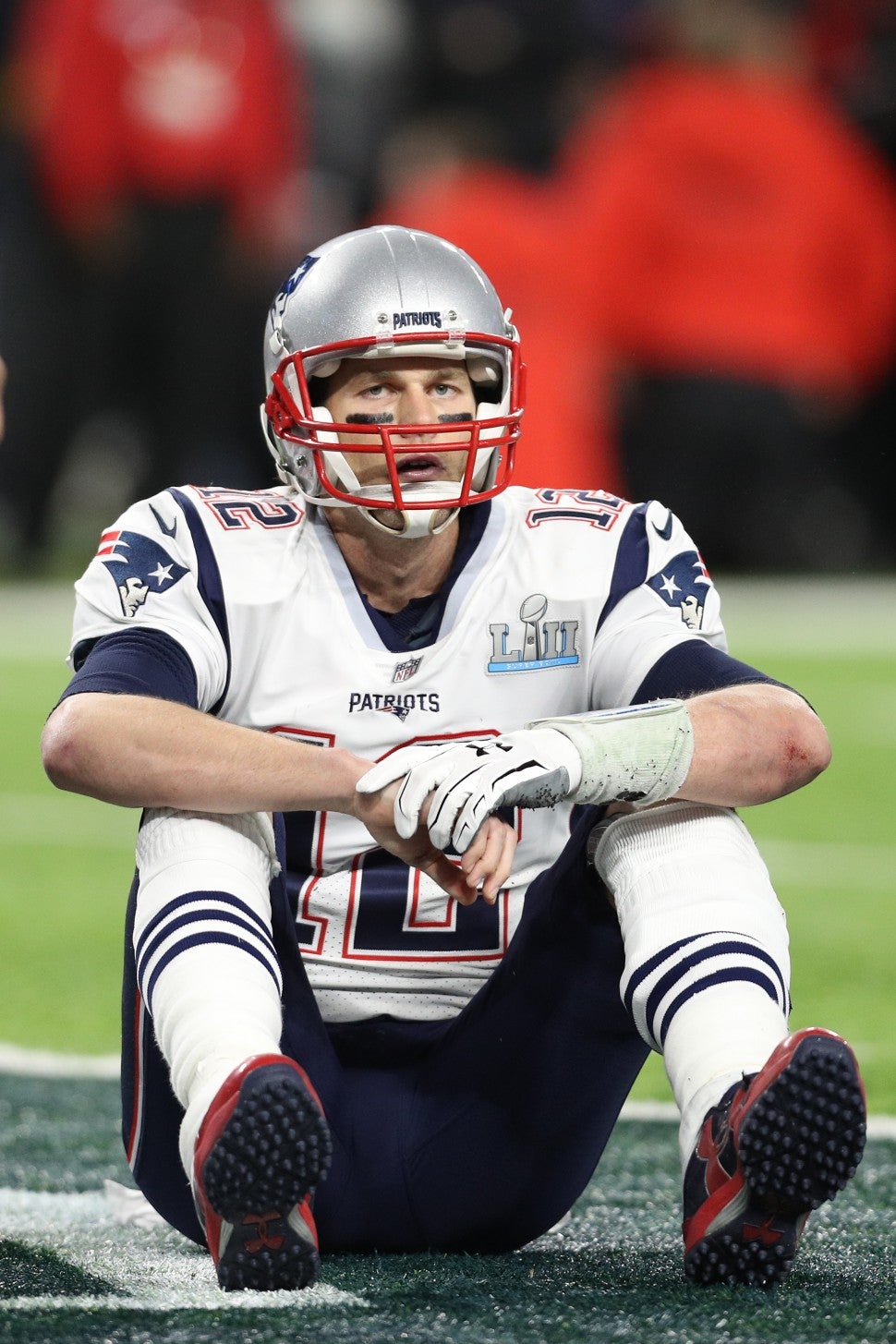 The Pats were right back in it the next year, after Brady broke yet more regular season records — this time, he took his place atop the mantle over Peyton Manning and Brett Favre for most regular season wins in NFL history. He also became the oldest player to lead the league in passing yards, as well as the oldest QB to start all of his team’s regular season games. However, in a rematch against their Super Bowl XXXIX opponents, the Philadelphia Eagles, Brady lost his third career Super Bowl — despite setting another record for postseason passing yards — proving that the NFC East just might have his number when it comes to championships. 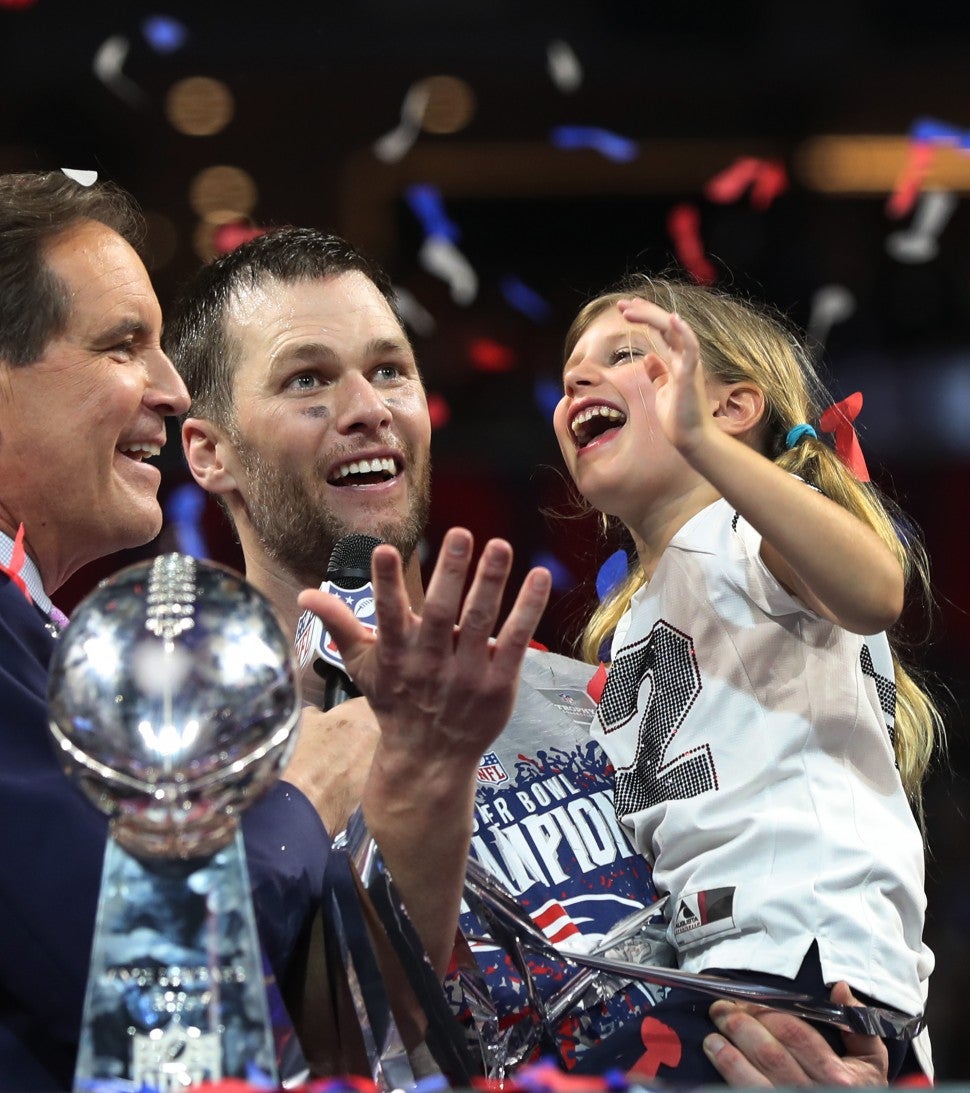 Brady’s most recent Super Bowl — his last with the Patriots — was perhaps his most anticlimactic, though that didn’t make it any less sweet. After throwing his 500th touchdown during the regular season — and breaking Vinny Testaverde’s record by having thrown touchdowns to 71 different players over the course of his career — the Patriots’ only stumbling block in the postseason came from the Kansas City Chiefs in the AFC Championship game. After defeating them, the Pats went on to best the Rams in the lowest-scoring Super Bowl in history, and Brady won his sixth ring without having to throw a touchdown pass. The Pats tied the Steelers for the most Super Bowl wins in franchise history, and Brady became the first player ever to win six Super Bowls, as well as the oldest quarterback to win one, at 41, forever cementing his legacy in New England. 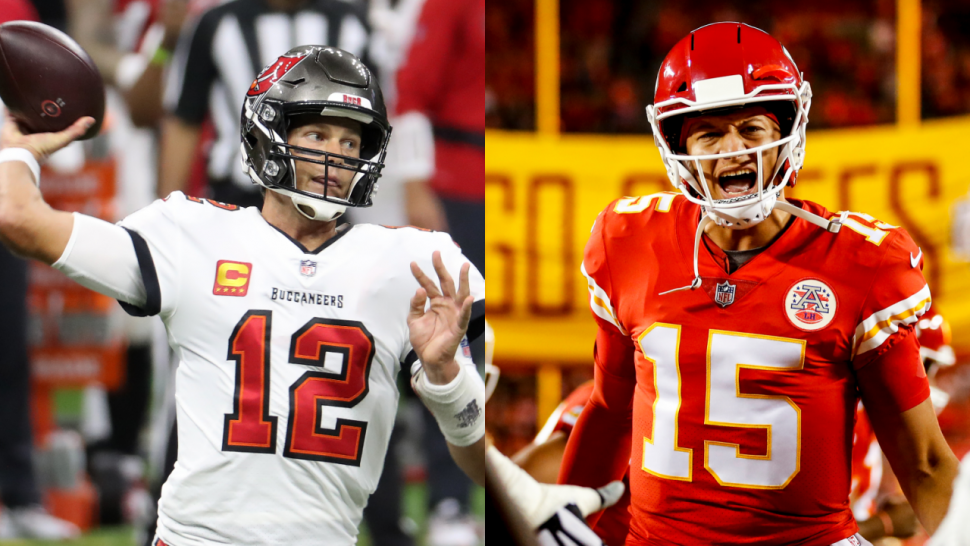 Super Bowl LV promises to be a major test for Brady, as the 14-time Pro Bowler faces what may be the NFL’s dynasty successor to his run with the Patriots in Patrick Mahomes and the Kansas City Chiefs. Mahomes, the reigning Super Bowl MVP, has already broken records of his own, and certainly has his sights set on a few of Brady’s. However, the Bucs have one of the league’s best defenses on their side and major offensive weapons in wide receivers Mike Evans, Chris Godwin and Brady’s old Pats pal, Rob Gronkowski. While the Chiefs will be looking to become the first team to repeat as Super Bowl champions since Brady did it in 2004, there’s no counting the GOAT out just yet.

Super Bowl LV airs live on CBS and CBS All Access on Sunday, Feb. 7, 2021. Kickoff is at 6:30 p.m. ET. Additionally, stream for free on CBSSports.com as well as on the CBS Sports app on your phone.