Tyson Apostol is definitely one of the most colorful characters Survivor has ever seen, and his dry sense of humor and bone-chillingly calm approach to blindsides have made him a fan favorite. Tyson has appeared on four different seasons of Survivor, including Winners at War, the season that he’s currently competing on.

Tyson has played a pretty low key game on Winners of War so far, but it’s likely that things will start to heat up for him soon—he’s sneaky, a strong overall player, and he’s part of what Yul Kwon has dubbed the “Pokers Alliance.”

However, Tyson previously told Entertainment Weekly that he knows he’s going to win Winners at War, and he said that he’s one of the greatest Survivor players of all-time, whether fans realize it or not. To bolster his point, former Survivor player Malcolm Freberg recently explained why he thinks Tyson should win the season, and he shared a sweet story online about how Tyson once remembered his friend’s name after the very packed and very hectic Survivor: Game Changers finale. 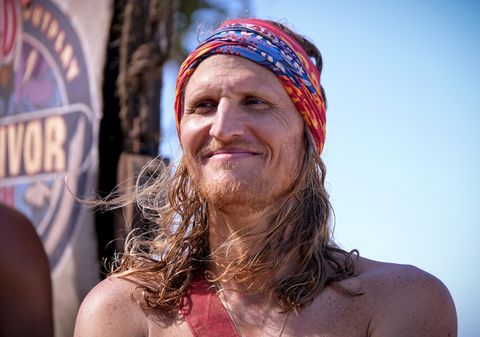 Tyson during the premiere of Winners at War.
CBS Photo ArchiveGetty Images

“I realize that might not sound like a particularly high bar to clear, but you should have seen Kyle melt with awkward joy when—moments after mentioning him as her fave, and knowing that Tyson met a hundred people last night—he remembered her name. That little gesture is why I’m rooting for @TysonApostol this season,” Malcolm tweeted.

After Malcom’s endorsement, we decided to take a look back on Tyson’s time on Survivor, as well as his relationship with wife Rachel Foulger. But is he truly the GOAT? We’ll let you decide.

Did Tyson ever win Survivor?

Tyson won Survivor: Blood vs. Water in 2013 (his third time on Survivor). On that season, the big twist was that the castaways had to compete against their loved ones, and Tyson’s then-girlfriend Rachel Foulger was eliminated during the season’s second episode. While he was extremely upset that Rachel went home, he also used his pain as fuel to make it to the end.

Throughout the season, Tyson found two idols, and he blindsided brothers Aras and Vytas Baskauskas, two incredibly strong players. After surviving a rock draw that sent Katie Collins home, Tyson went on to win the final two individual immunity challenges. He brought Monica Culpepper and Gervase Peterson (his closest allies) to the final three, where he won the season in a 7-1-0 vote.

Are Tyson and Rachel from Survivor still together?

Tyson and Rachel first appeared together on Blood vs. Water, and he frequently mentions her on Winners of War. The couple were part of the cast on Marriage Boot Camp: Reality Stars 2 in 2014, and Tyson proposed to her during the show’s finale. The couple’s 2015 wedding was officiated by Tyson’s fellow Tocantins castaway Stephen Fishbach, and Tyson and Rachel now have two children together.

How did Tyson vote himself out?

Tyson’s second Survivor run was on Heroes vs. Villains, where he was placed on the Villains tribe. He joined the tribe’s majority alliance of Jerri Manthey, Coach Wade, Rob Mariano, Sandra Diaz-Twine, and Courtney Yates, which left Russell Hantz, Parvati Shallow, and Danielle DiLorenzo on the outs.

On Day 15, there was a double tribal council, so both the Heroes and the Villains had to vote someone out. The majority alliance on the Villains side knew Russell had an immunity idol, so they decided to split their votes between him and Parvati.

However, Tyson deviated from the plan, and he decided to vote for Parvati instead of Russell, which skewed the numbers. At tribal council, Russell ended up playing his idol for Parvati, negating the four votes that came her way. The vote ended up being three votes Tyson and two votes Russell, so Tyson went home.

The move is now infamous in Survivor lore, but Tyson’s been a good sport about the whole thing. When asked by Entertainment Weekly where his vote flip should rank on the list of dumbest Survivor moves, he said that he “would hope number one. I’ve been number one in so many things, I don’t want to lose it now.”

What happened to Tyson on Survivor: Tocantins?

Tocantins marked Tyson’s first appearance on Survivor, and he was allied with Coach Wade the entire season. The alliance took him pretty far in the game, although he was also bitter rivals with Sierra Reed.

Tyson was a physical threat that season, and he won the first two individual immunity challenges after the merge. However, he was blindsided after he didn’t win immunity the third time, and he said it was probably due to his overconfidence: “I thought I had my game in the bag. But I probably shouldn’t have been as quite confident or so gullible.”