The former member of girl group Spice Girls takes to Instagram to reveal to her followers that the ‘Sorry’ hitmaker actually sends her a pair of lilac Crocs, though she isn’t sure if she will wear them or not.

AceShowbiz -Victoria Beckham (Victoria Adams) received a sweet present from Justin Bieber, but it wasn’t what she’d ever expected. The former member of girl group Spice Girls took to her Instagram account to reveal to her followers that the “Sorry” hitmaker actually sent her a pair of lilac Crocs which she wasn’t sure if she would wear or not.

Making use her Instagram account, she turned to her almost 30M followers to decide. “A lot of people have been asking me what I’m planning on wearing after lockdown…what do we think about this suggestion from @justinbieber?!” so the fashion designer wrote on Wednesday, April 28 over a picture of adorable pair of lilac Crocs from Justin’s latest collaboration with the brand. In a separate post, Victoria created a poll and asked, “Will I be wearing lilac crocs?” 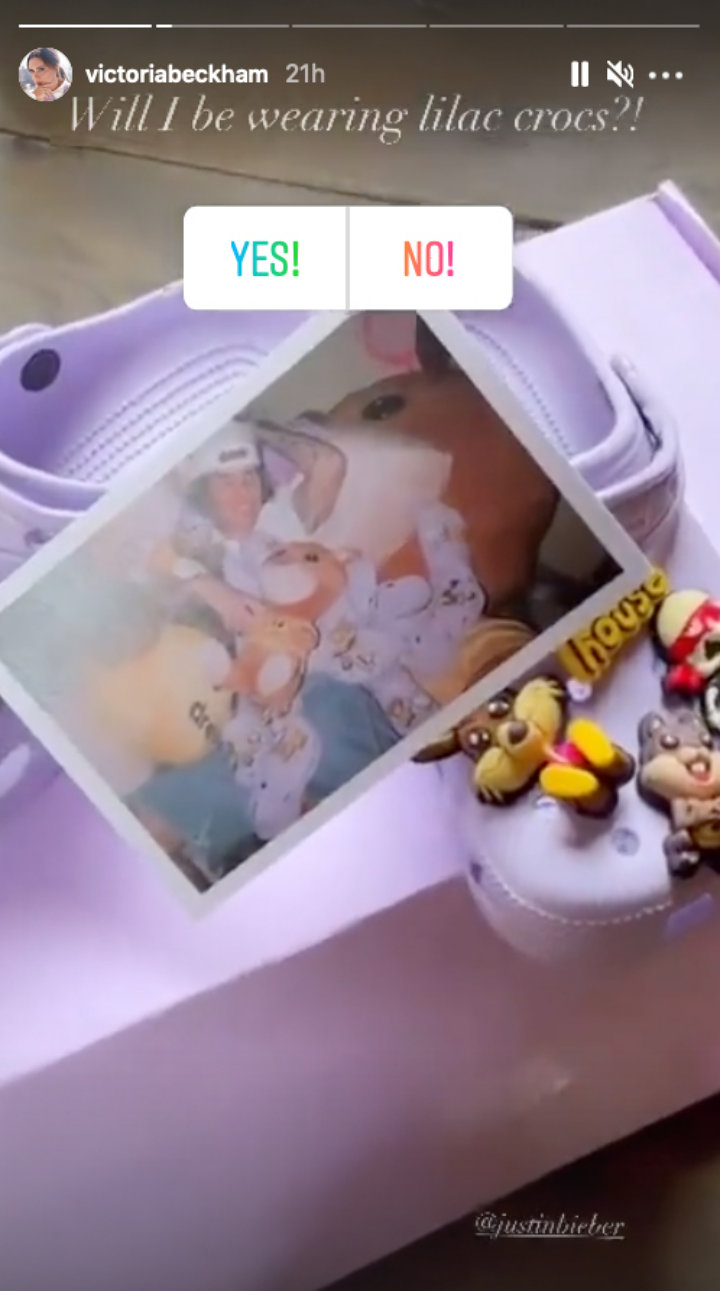 Later, the wife of David Beckham shared a clip of the flips which were adorned with the Drew House logo and cartoon character charms. “Okay, this is so kind of Justin to send me some Crocs… I’ve never worn a pair of Crocs!” she said. Giggling, the 47-year-old beauty continued saying, “They did make me laugh. It is the thought that counts – thank you so much! I’m not quite so sure what to say about this, but thank you. It’s very sweet!”

Justin has yet to respond to Victoria’s shoutout.

While Victoria might not be a fan of Crocs, Justin’s limited edition design sold out in just 90 minutes when they were launched back in October. Additionally, it crashed the Crocs website.

That aside, Justin sparked outrage when he debuted dreadlocks earlier this year as many accused him of cultural appropriation. Despite the backlash, Justin doubled down on it by uploading another picture of him rocking the hairstyle, though this one featured him styling his dreadlocks into a man bun.

While some others criticized the “Peaches” hitmaker, some fans jumped to his defense. “I don’t understand why we can’t let people do what they want with their own hair lol people he’s complimenting it by rocking it,” one person said. “Reading some of these comments are just sad. Justin 100% supports Black Lives Matter, him and his wife have sense the beginning. Africa Americans were not the ones that originated dread locks they have been around sense the Vikings and even before that,” another fan wrote.

Following the drama, Justin wrote some inspirational words on his Instagram account. “All of us humans just want to be liked, fit in, belong, feel heard, be accepted.. we all have our own insecurities that we try and hide and we make it seem like we have it al together,” his post read. “Arent we all broken? We can all hide behind superficial things but the truth is we are all hurting.”